Mapping the Weather on WASP-43b

On Friday I mentioned transmission spectroscopy, the technique of analyzing the light of a parent star as it is filtered through a planetary atmosphere. We’ve used it on various ‘hot Jupiters’ before now — think of the much studied planet HD 209458b, where water vapor, carbon dioxide and methane have been detected and fierce upper atmosphere winds revealed. And while we wait to see if the method can be applied to the interesting WASP-94 system, we can look at its uses in another hot Jupiter whose weather has now been mapped.

WASP-43b has twice Jupiter’s mass and a breathtaking 19-hour year. Scientists using the Hubble Space Telescope have used transmission spectroscopy to determine the abundance of water in the atmosphere at the terminator between night and day on this tidally locked world. The team also used so-called emission spectroscopy — in which much of the light of the parent star is subtracted — to measure water abundance and temperature at different points in its orbit. What emerges from combining the two is a map relating weather and longitude.

“We have been able to observe three complete rotations — three years for this distant planet — during a span of just four days,” explained Jacob Bean (University of Chicago), leader of the research project. “This was essential in allowing us to create the first full temperature map for an exoplanet and to probe its atmosphere to find out which elements it held and where.” 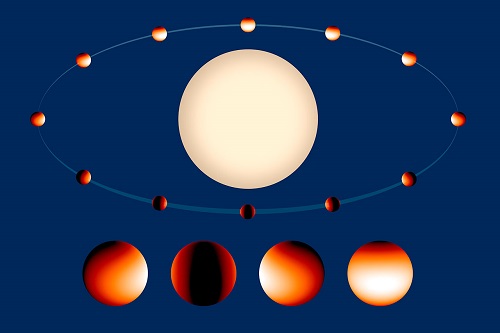 Image: In this artist’s illustration the Jupiter-sized planet WASP-43b orbits its parent star in one of the closest orbits ever measured for an exoplanet of its size — with a year lasting just 19 hours. The planet is tidally locked, meaning it keeps one hemisphere facing the star, just as the Moon keeps one face toward Earth. The color scale on the planet represents the temperature across its atmosphere. This is based on data from a recent study that mapped the temperature of WASP-43b in more detail than has been done for any other exoplanet. Credit: NASA, ESA, and Z. Levay (STScI).

As we might expect, a planet in this configuration is a place of violent weather. The researchers find high-speed winds moving from the day side, where the temperature is above 1500 degrees Celsius, to the night side, where temperatures are in the 500 degree Celsius range. The two-dimensional maps of the planet’s atmospheric temperatures help us define the circulation patterns that show this heat transport under conditions of tidal lock.

We learn that WASP-43b is hot enough that all the water in its atmosphere is vaporized rather than producing extensive cloud cover — in fact, the planet reflects little of the parent star’s light. Water vapor is a useful tool. We know all too little of the water abundances in the gas giants of the outer Solar System because water is found deep inside their atmospheres in the form of ice. A hot Jupiter like WASP-43b opens the door for direct study of water in the form of vapor. The measurement is important because of the role water ice is thought to play in the standard core accretion model of gas giant formation, where solid particles collide, merge and grow into gradually larger bodies until a planetary embryo emerges.

Ahead for the water-mapping team is to make similar measurements for the atmospheres of other planets to study their chemical abundances. The paper on the water-mapping study explains why data from a wide variety of planets should help as we move into the era of the James Webb Space Telescope and other increasingly sensitive instruments:

…a planet’s chemical composition depends on many factors, including the planet’s formation location within the protoplanetary disk, the composition, size and accretion rate of planetesimals, and the planet’s migration history. Even perfect constraints on the abundances of many chemical species for a small number of objects may not yield a unique model for the origin of giant planets. Fortunately, the plethora of transiting exoplanets that have already been found and will be discovered with future missions offer the potential for statistical studies. Measuring precise chemical abundances for a large and diverse sample of these objects would facilitate the development of a more comprehensive theory of planet formation.

The day will come when we’re performing the same kind of measurements on Earth-sized worlds around other stars, something to keep in mind as we move into the JWST era.

Previous post: A Planet Each for Stars in Binary System