I like what Radwan Tajeddine (Cornell University) has to say about recent work on Saturn’s moon Mimas. The lead author of a paper on the subject in Science, Tajeddine compares recent Cassini observations of the moon to a child shaking a wrapped gift, trying to figure out what the package conceals. ‘Shaking’ Mimas in a similar way through analysis of the Cassini data has revealed what might be a sub-surface ocean, or an unusually-shaped core preserved since the moon’s formation.

At work here is a technique called stereo photogrammetry, in which astronomers measure the moon’s libration around its polar axis. Libration is an oscillation or ‘wobble’ that can be studied by looking at Cassini imagery — taken by its Imaging Science Subsystem at different times and angles — and analyzing the images with the help of a computer model that involves hundreds of reference points on the surface. The amount of Mimas’ libration points to interesting things in the interior, but just what we still don’t know. 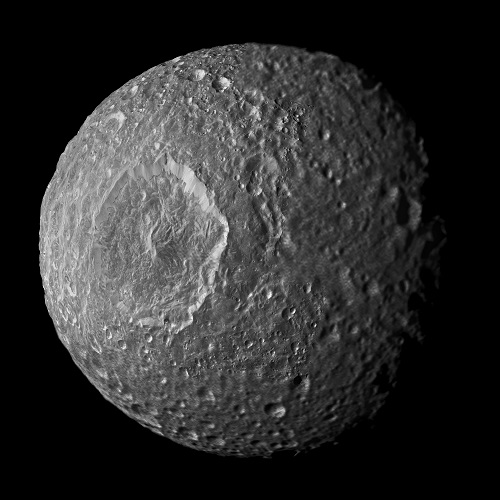 Image: Cassini came within about 9,500 kilometers (5,900 miles) of Mimas during its flyby on Feb. 13, 2010. This mosaic was created from seven images taken that day in visible light with Cassini’s narrow-angle camera. An eighth, lower-resolution image from the same flyby, taken with the wide-angle camera, was used to fill in the right of the mosaic. The images were re-projected into an orthographic map projection. This view looks toward the hemisphere of Mimas that leads in its orbit around Saturn. Mimas is 396 kilometers across. The mosaic is centered on terrain at 5 degrees south latitude, 85 degrees west longitude. North is up. Credit: NASA/JPL.

Subsurface oceans create astrobiological interest, and we have evidence for various oceans in the outer system, from Europa, Ganymede and Callisto in the Jovian system, and of course in Saturn space on geyser-spewing Enceladus and Titan. In each case, we have an icy surface concealing what may lie below. Perhaps oceans are common in outer system moons, but the situation on Mimas may be different. The paper notes why an ocean there is problematic:

The ocean hypothesis sounds unlikely since no evidence of liquid water, thermal heating or geological activities have been reported on Mimas’ heavily cratered surface, contrary to Enceladus. Radiogenic heating alone could not sustain such an ocean, because the heat produced by the core escapes through the satellite’s icy shell and any ocean would freeze very quickly.

Even so, we can’t dismiss an ocean out of hand. The paper continues:

One explanation could be found in Mimas’ high eccentricity (~0.02), whose origin remains unexplained, and may have been higher in the past. As a consequence, an ocean could have been formed and been sustained due to tidal heating.

If it is there, the researchers think an internal ocean would exist under a crust between 24 and 31 kilometers thick. But what the data show us so far is simply a libration that is twice what we would expect from the moon’s orbital dynamics. This is a value that is being driven primarily by Mimas’ internal structure. The next step in the study of Mimas could proceed, the researchers suggest, by mapping the moon’s gravity field to uncover anomalies, by measuring tidal dissipation using astrometry from Cassini, or by measuring the heat flux at the surface. In the absence of other models to explain these findings, it would appear that Mimas has either an unusual core that is out of equilibrium or an internal ocean beneath thick ice.