The welcome news that the Hubble Space Telescope has found three potential Kuiper Belt targets for New Horizons means that our hopes for an extended mission may be fulfilled. Pluto/Charon is an exciting target, but how much better to use the spacecraft to visit a Kuiper Belt object as well, a member of that vast ring of debris circling our Solar System. We’ve been to asteroids, of course, but KBOs are a different thing altogether, objects that have never been heated by the Sun, and thus give us a sample of the earliest days of the Solar System. 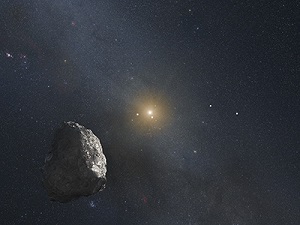 This was not an easy survey to complete, although when it began with the help of ground-based instruments — the 8.2-metre Subaru Telescope in Hawaii and the 6.5-metre Magellan Telescopes in Chile — a number of KBOs were identified. The problem was that none could be reached given the fuel available for course correction. Remember the observing conditions researchers had to deal with. Pluto is now in the direction of the constellation Sagittarius, which means observers were looking toward galactic center, a crowded starfield against which to identify targets. Says New Horizons science team member John Spencer (SwRI):

“We started to get worried that we could not find anything suitable, even with Hubble, but in the end the space telescope came to the rescue. There was a huge sigh of relief when we found suitable KBOs; we are ‘over the moon’ about this detection.”

Image: An artist’s impression of a Kuiper Belt object (KBO), located on the outer rim of our solar system at some 4 billion miles from the Sun. The Sun appears as a bright star at image center in this graphic, which represents the view from the KBO. The Earth and other inner planets are too close to the Sun to be seen in this illustration. The bright “star” to the left of the Sun is the planet Jupiter, and the bright object below the Sun is the planet Saturn. Two bright pinpoints of light to the right of the Sun, midway to the edge of the frame, are the planets Uranus and Neptune, respectively. The planet positions are plotted for late 2018 when the New Horizons probe reaches a distance of well over 6 billion kilometers from the Sun. The Milky Way appears in the background. Credit: NASA, ESA, and G. Bacon (STScI).

The ground search could not begin until 2011 to allow potential KBO candidates to be closing on the region that New Horizons will be able to reach after the Pluto/Charon flyby. With the ground-based search stalled, the New Horizons team was awarded observing time by the Space Telescope Science Institute in July, with the search ending in early September. With Hubble’s help we now have one KBO that has been called ‘definitely reachable’ and two other candidates that require additional observing time to determine whether they are in range. The ‘needle in a haystack’ search has revealed KBOs that are no more than one to two percent the size of Pluto. A KBO named 1110113Y or “PT1” looks to be the most likely candidate for a flyby. 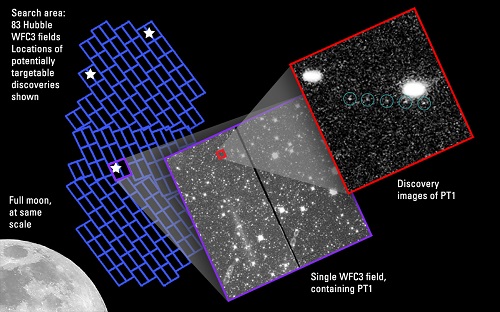 Image: A Kuiper Belt object (KBO) that is potentially reachable by NASA’s Pluto-bound New Horizons probe is visible in multiple exposures taken with the Hubble Space Telescope. Hubble tracked the KBO (labeled PT1) moving against the crowded background field of stars in the summer constellation Sagittarius. The object is no bigger than 30 to 45 kilometers across, and it is a deep-freeze relic of what the outer solar system was like 4.6 billion years ago, during the period when the Sun formed. The image at right shows the KBO at an estimated distance of over six billion kilometers from Earth. As the KBO orbits the Sun, its position noticeably shifts between exposures taken approximately 10 minutes apart. Credit: NASA, ESA SwRI, JHU/APL, and the New Horizons KBO Search Team.

The New Horizons closest approach and flyby of Pluto/Charon takes place in July of 2015, and assuming NASA approves an extended mission, the spacecraft could reach one of the KBOs three to four years later, at a distance of well over six billion kilometers from the Sun. We’ve seen how valuable our Voyagers have been at charting the outer regions of the Solar System, an extended mission that has gone well beyond their original parameters. It’s clear that New Horizons can now become something of a ‘precursor to an interstellar precursor,’ returning data on a KBO even as we look toward missions explicitly designed to study the interstellar medium beyond the heliosphere.