Over the years we’ve discussed many concepts for ships that could take us to the stars (they’re all in the archives), and none of them are without problems. Although Les Shepherd was analyzing antimatter possibilities by 1952 and solar sails were already coming into the mix, I’d argue that the first design that looked like a feasible way to get a human crew up to a high percentage of lightspeed was Robert Bussard’s ramjet. Introduced in a 1960 paper, the idea was the subject of Carl Sagan’s scrutiny in Sagan and Shklovskii’s Intelligent Life in the Universe (1966), but later fell afoul of an apparent showstopper: The ramscoop produces more drag than thrust.

It’s a measure of the magnitude of the interstellar problem that so many different concepts continue to emerge. Theorists have been banging away at starship engineering for sixty years and even longer if we go back to the musings of Konstantin Tsiolkovsky and early thinkers like Olaf Stapledon and John Desmond Bernal. When Sten Odenwald talks about The Dismal Future of Interstellar Travel, he’s reflecting what people who have tried to design starships, like Robert Forward and the Project Daedalus team, also understood in their day. There are ways of getting to another star with known physics but all require huge investment for very slow journeys. In this realm, ‘fast’ means ‘decades,’ and ‘slow’ can involve thousands of years.

The difference is that people like Forward thought we would make these journeys anyway. I found myself making this case in a recent discussion among friends where the key constraint seemed to be the lifetime of the scientists who planned the mission. I’ve argued before that we need to do away with this constraint and think more in terms of continuing scientific return across generations. If we could build a craft that could send back data from a nearby star within several hundred years, would we launch it? Not with today’s thinking, but if we look long-term and reach a point where we can afford it, I’m enough of an optimist to believe that scientific curiosity runs species-wide and will transcend our human need for quick answers. Nor does this mean we stop looking for ways to make the journey faster.

Engineering a starship is hugely problematic, and although we’ve recently looked at how it might be done if (for some reason) we had to launch something in the near-term, I think we should back starflight off into a much longer time-frame. Dr. Odenwald mentions the ‘slow boat’ method, which has been a staple of science fiction since early stories like Don Wilcox’s “The Voyage that Lasted 600 Years (Amazing Stories, October 1940). Tsiolkovsky also wrote about such vessels. My guess is that all our efforts will take place within the context of a gradually enlarging civilization that is adapting itself to deep space conditions through large habitats that lead, ultimately, to star crossings. 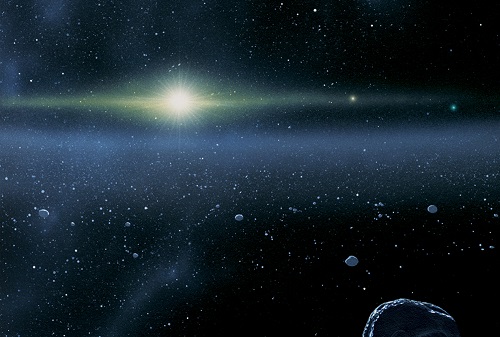 Image: An artist’s impression of the outer Solar System over six billion kilometers from the Sun. Will our species move ever outward over the centuries to exploit these resources? Johns Hopkins University Applied Physics Laboratory/Southwest Research Institute (JHUAPL/SwRI)

We saw yesterday in Odenwald’s essay as well as Andreas Hein’s 2012 paper that the cost of even a Daedalus-style flyby would be enormous. But we need to place such costs into the framework of a culture that will not go interstellar before it has built out into its own Solar System. We can extrapolate where the world economy is going within decades or centuries based on our best projections, but it’s much harder to get a handle on how large a system-wide economy will eventually become. We also can’t project with any certainty what kind of technologies a culture that exploits resources on this scale will develop to keep itself functional and growing.

Doubtless scientists will continue to research ways to make fast crossings to the stars, and we can hope they succeed. At the same time, an expansion into the rest of the Solar System, one that could take centuries and still not exhaust available resources, would help us master not just better propulsion technologies but the critical issues of life support in closed systems. Large habitats on the model of O’Neill cylinders are not at all out of the question as populations begin to grow off the Earth, and the availability of resources — from Kuiper Belt objects, comets in the inner and outer Oort Cloud, ‘rogue’ planets moving in the interstellar deep — may well keep the wave of expansion in play. It doesn’t bother me in the slightest that such an expansion might take thousands of years to eventually arrive at another star. We can also expect the people that eventually get there to have changed along the way as the human race begins to fork.

Meanwhile, a healthy system-wide infrastructure in several hundred years may well be able to afford a Daedalus-style probe, but this is surely not the spacecraft it would send. As one branch of humanity continues working outward in worldship habitats without the need for a planetary surface, those within the system may well be able to build the needed tools for beamed laser or microwave propulsion at the requisite scale. We can hardly imagine these today because we lack cheap access to space, but a permanent human presence there changes the equation as we master the techniques for building large structures off-planet, perhaps with the help of nanotechnology.

Given the cost of sending heavy payloads on fast missions, we’ll surely explore small, robotic probes as we learn whether or not human starships can be designed for missions lasting less than a lifetime. I like Sten Odenwald’s enthusiasm for what we might do with virtual technologies:

When you subtract manned exploration, which is hugely expensive, and replace it with robotic rovers that relay high-definition images back to Earth, all of humanity can participate in their own personal and virtual exploration of space, not just a few astronauts or colonists. The Apollo program gave us 12 astronauts walking on the lunar surface, a huge milestone for humanity, but today we can do the Apollo program all over again and augment it with a virtual, shared experience involving billions of people! This is the wave of the future for space exploration, because it is technologically doable today and scalable at ridiculously low cost per human involved. NASA’s Curiosity rover is only the Model-T vanguard of this new approach to human exploration. More sophisticated versions will eventually explore the subsurface ocean of Europa and the river systems on the “Earth-like” world of Titan — perhaps by the end of this century!

Surely virtual reality and shared experience using rovers is in our future, and it’s likely it will inspire missions that push ever further out, to return the datastream that a curious public will demand. Those making the slow move into the outer system and beyond can take part in this, but so can any faster spacecraft we can engineer to create a datastream from another star. Can gravitational lensing methods — think Claudio Maccone’s FOCAL mission — help us communicate with robotic spacecraft on such missions? Perhaps ‘swarm’ technologies using myriads of tiny spacecraft can make interstellar crossings at a fraction of lightspeed, and as Mason Peck has suggested, return data via a round trip return to the home world.

The potential of artificial intelligence is likewise obvious as we ponder whether to send a crew of ‘artilects’ on missions whose length would challenge human crews. Perhaps some form of ‘mind uploading’ will be found that allows a human ‘presence’ aboard even such a ship as this. We can’t predict disruptive technologies, but it seems clear to me that within the context of slow, generational expansion there will be options for faster travel of at least small payloads. So I have to disagree with Sten Odenwald when he writes that “…we live in a universe where star travel seems permanently beyond reach in any kind of human future that makes scientific or economic sense.” I’ve said before that it is the business of the future to surprise us, but even lacking such surprise, a way forward emerges that is not inconsistent with what the laws of physics demand.