An Updated Look at Space Sailing

It was back in 2008 that Copernicus Books published an excellent introduction and reference to space sail technologies. Now the work of Gregory Matloff, Giovanni Vulpetti and Les Johnson, Solar Sails: A Novel Approach to Interplanetary Travel is about to be released in a new edition that I’ve been reviewing for the past month (Note: the 2nd edition is not yet up on the book sites, but publication is slated for later in November). The new version preserves the older edition’s structure but inserts three new chapters covering recent developments, one of which — the cancellation of the Sunjammer sail mission — is too current to have made it into the text. [Addendum: My mistake! Although the text I saw didn’t have the Sunjammer news, Les Johnson tells me that the authors were able to insert it into the final version].

So let’s start with that to get up to speed, and then I want to use Solar Sails as a guide through a series of posts covering not just sails themselves, their variants and their potential missions, but their relationship to an emerging interplanetary and even interstellar framework. The new edition is made to order for that, because in addition to providing the needed background to get any newcomer up to speed on how sails operate, it takes pains to contrast sail technologies with conventional rockets as well as other deep space concepts.

But first, Sunjammer, which you can read about in an article with the woeful title NASA Nixes Sunjammer Mission, Cites Integration, Schedule Risk in SpaceNews. Here we learn from writer Dan Leone that NASA has given up on flying the Sunjammer sail in 2015. The 1200 square-meter sail was under development at L’Garde in Tustin, CA, which according to the article will be laying off about half its employees in the near future. I won’t get into the details of Leone’s article, but the upshot is that we’ll likely see no Sunjammer launch before 2018.

SpaceNews quotes an email from congressman Dana Rohrabacher (R-California) to this effect:

“Obviously, I’m very disappointed that we won’t complete this… We never seem to be able to afford these small technology development projects that can have potentially huge impacts … but we can find billions and billions of dollars to build a massive launch vehicle with no payloads, and no missions,” he said, referring to NASA’s Space Launch System heavy-lift rocket. 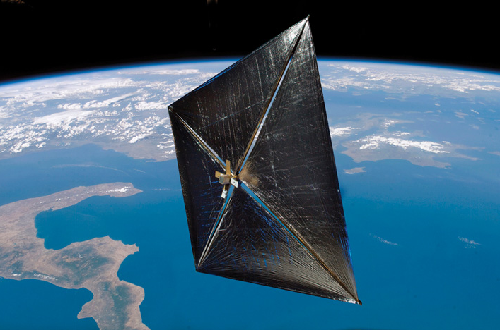 Image: Artist’s conception of a solar sail above the Earth. This supple technology has numerous near-Earth benefits but scales well to missions to the outer Solar System and beyond. Credit: NASA.

At this stage of the game, solar sails are indeed small technology projects with potentially big impacts, and a look through Solar Sails confirms the case that this technology is both ready to fly and possessed of certain key advantages over chemical rockets. We can’t launch them from Earth, so we need chemical rockets to get them into an orbit from which they can be deployed, but once there, sails need to carry no propellant themselves. We can leave behind not just the safety concerns about solid or liquid rocket boosters but also the sheer complexity of the engine, and the extreme situations it must be harnessed to overcome.

All of this can get touchy when we’re operating on Earth — The Space Shuttle’s main engine, says NASA, “operates at greater temperature extremes than any mechanical system in common use today,” and indeed, we can look at the temperature contrasts in such an engine, from down to 20 degrees Kelvin (the temperature of liquid hydrogen fuel) all the way up to 3600 degrees K in the engine’s combustion chamber when the hydrogen burns with liquid oxygen.

But the deep space situation is likewise problematic. A probe to another planet has the same need to store, pump and mix liquid fuel with an oxidizer, but it must also rely on pumps and other internals that have been in a state of storage for up to years at a time. Let me quote the book on a telling case in point:

In 2004, the rocket engine used by the Cassini spacecraft to enter into Saturn’s orbit had to fire for more than 90 minutes after being mostly dormant since its launch 7 years previously. The engine performed as designed, but as Project Manager Bob Mitchell is quoted as saying before the engine was ignited: “We’re about to go through our second hair-graying event… Todd Barber, Cassini’s leader for the propulsion system, called that system “a plumber’s nightmare.” So complicated was the engine that a complete backup was launched onboard in case the primary were to fail… The mass required for the spare engine might have been used to accommodate more science instruments.

None of this is to downplay the need for basic rocketry to get us to Earth orbit, but a case for continued, and ramped up, experimentation with solar sails is certainly there. When we’re contemplating missions to the outer Solar System and beyond, we have to look at the rocket equation developed by Konstantin Tsiolkovsky, which has governed everything we do with these tools. It tells us that a rocket gains speed linearly as its starting mass of propellant rises exponentially. So if we keep adding more fuel to get where we want to go faster, we demand still more fuel, in exponential fashion, just to push the mass of the fuel we added in the first place.

The case space scientists will have to continue to make is that sails are not just exotic attempts to mimic the great sailing ships of old (although the analogy is delightful and often tapped by sail theorists). Instead, by carrying no propellant, the sail gets us around the rocket equation entirely. We wind up with tiny thrust delivered, in the case of solar sails, by the momentum imparted by photons from the Sun. Small thrust over time builds continuously, allowing the slowly-starting sail to gradually overtake the probe hurled along the same trajectory by a chemical rocket.

Sunlight drops sharply as we move toward the outer Solar System, and indeed, by the time we’ve reached the orbit of Jupiter, our sail is experiencing a severe shortage of solar photons. But if we turn our attention to deep space, we have the option of beaming energy to the sail through laser or microwave methods that can compensate for the loss. In fact, some of the designs for beamed sails offer us interstellar options, trips to nearby stars within decades, at the cost of building a Solar System-wide economy that can afford the needed power stations. Solar Sails explores these options in detail, as we’ll see later this week.

Just how and where to deploy solar sails on interplanetary missions? We know that at the distance of the Earth from the Sun, the solar flux is on the order of 1.4 kilowatts per square meter, which works out to being nine orders of magnitude weaker than the force of the wind on the Earth’s surface. You can see why sails have to be both lightweight and large. We also know that the light impinging on the sail varies inversely by the square of the distance from the Sun. This is why the Japanese space agency JAXA, which pulled off the successful IKAROS sail mission, is looking at a Jupiter mission using not just a solar sail but ion propulsion. The sail gets you to interplanetary speeds but the ion engine will be fully efficient at 5 AU and beyond.

When I wrote Centauri Dreams (the book), I speculated that a true interstellar mission might be likewise reliant on more than one propulsion technology. A laser-beamed lightsail might, for example, deploy a magnetic sail using a lightweight but immense superconductor loop to brake against a destination star’s stellar wind upon arrival. The idea of multi-modal propulsion was hardly original with me. In fact, Giovanni Vulpetti had been talking about such an idea for some time, and in Solar Sails refers to it as ‘multiple propulsion mode.’ Film director James Cameron also picked up on the concept in 2009’s Avatar, in which the starship Venture Star uses both antimatter technologies as well as a laser-driven lightsail. Hollywood had never before shown such an interesting starship idea.

Tomorrow I want to look not just at interstellar sail theory but in particular at some of the private initiatives that have pushed sail design forward, in particular the Aurora Collaboration in Italy (both Vulpetti and author Gregory Matloff were key players here, with Vulpetti serving as team coordinator), and the laboratory work accomplished by James and Gregory Benford at the Jet Propulsion Laboratory in California, where core beamed sail ideas were put to the test.