Although we can trace the growth of research into interstellar flight all the way back to the days of Konstantin Tsiolkovsky, the effort has often operated outside of government channels. Scientists and engineers whose day job might take in aspects of rocketry were hard pressed to find time for studying trips to the stars when the proximate needs were better communications satellites or improved designs for reaching low Earth orbit. Nonetheless, work continued, marked by the enthusiasm of the practitioners for what was clearly the ultimate mission. Official or unofficial, small groups hammering on ideas have continued to debate the core concepts.

When the Jet Propulsion Laboratory in Pasadena turned Aden and Marjorie Meinel loose on a mission concept aimed at reaching 1000 AU back in the 1970s, the duo looked at two propulsion options. As the new edition of Solar Sails: A Novel Approach to Interplanetary Travel (Copernicus, 2014) points out, the first of these was a nuclear-electric ion drive using xenon. But the Meinels also evaluated the use of a solar sail unfurled near the Sun. It’s interesting to read here that Chauncey Uphoff, senior analyst on the propulsion phase, was unable to publish the results of the sail study, which wound up circulating only as an internal memo within NASA. [Note: The link above goes to the first edition of this book. The new edition is scheduled for publication within the next few weeks. I advise waiting for it.]

Uphoff’s memo considered the solar sail as an alternative propulsion method, and even if this particular deep space sail concept remained out of view, the efforts of Gregory Matloff and Eugene Mallove soon brought interstellar missions using solar sails to the attention of the community. One of the three authors of Solar Sails, Matloff went to work on what might be done with a close solar pass and sail deployment (partial or complete) at perihelion. He and Mallove evaluated space-manufactured metal sails closing to within 0.04 AU of the Sun’s center, with cables approximating the tensile strength of industrial diamond.

Much of this work was published in the 1980s in the Journal of the British Interplanetary Society, focusing not on beamed laser sails (Robert Forward’s theme) but solar sails using solely the momentum imparted by solar photons. A sail like this, once outbound, could wind cable and sail around the habitat section to provide shielding against cosmic rays. Even a large payload might be accelerated to speeds allowing a trip to Alpha Centauri in 1000 years. Matloff’s 1984 paper “Solar Sail Starships – The Clipper Ships of the Galaxy” (JBIS 34, 371-380) is a classic that he and Mallove would soon update not only in optimization studies in JBIS but also in popular texts like The Starflight Handbook (1989).

But back to the theme of small-scale collaborations, from which the interstellar community has for so long benefited. It was back in 1993 at the International Astronautical Congress in Graz, Austria that a small group of solar sail enthusiasts gathered to organize a study of the technology. The study group that emerged was dubbed the Aurora Collaboration, a nod to Greek mythology, in which Aurora was the younger sister of Helios, the god of the Sun. Matloff was one of the core seven behind this collaboration, as was Giovanni Vulpetti, who became team coordinator. Other names familiar to Centauri Dreams readers will be FOCAL mission advocate Claudio Maccone and engineer and author Giancarlo Genta. 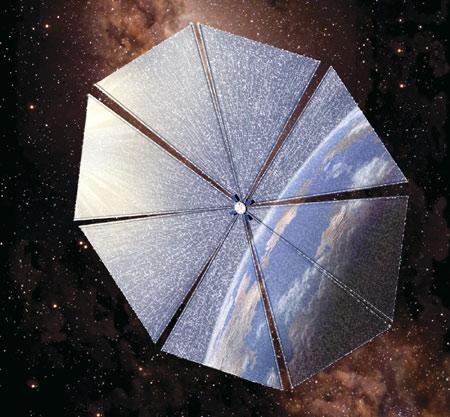 Excellent work can come out of highly motivated small groups like these, and I think the Aurora effort deserves greater attention than it has received. Fifteen published papers emerged from its labors, with three presentations to European space agencies and a workshop held at the University of Rome. Computer code for optimizing sail trajectories, experimental work on layered sail construction (a plastic substrate that can be detached once the sail has been constructed in space), and a number of deployment concepts resulted. The collaboration also studied telecommunications systems, analyzed aluminum sail optical properties, and optimized trajectories for potential missions to near interstellar space and the Sun’s gravitational lens.

The latter deserves a note: The gravitational well created by the Sun’s mass causes light to curve as it grazes the Sun from an object directly behind it (as seen by the observer). The resulting lensing effect is promising for observations at various wavelengths, which is where we get the idea of a FOCAL mission to the focus beginning at 550 AU. What the Aurora team did — with results presented at a meeting of the International Academy of Astronautics in Turin, Italy in 1996 — was to produce preliminary results for a less demanding mission, a sail to the heliopause. The team members presented a thin-film 250-meter square sail and analyzed ways of reducing the sail areal mass thickness, as well as exploring communications options and offering a structural analysis.

The Aurora team’s sail would act as a bridge between the Voyager probes ( the Aurora spacecraft would exit the system about three times faster than Voyager) and later deep space designs. Massing 150 kg, it would use a close solar pass for acceleration and its target was a more manageable (in the near term) 50 to 100 AU. Without benefit of press coverage or large amounts of funding, the Aurora Collaboration moved the ball forward through serious volunteer efforts of the kind the interstellar community has always relied on.

As we go through the papers groups like these create, it’s easy to think of the interstellar effort as being almost entirely theoretical. But laboratory work on some of these technologies goes back a long way, and we can trace early sail studies in the lab to the work of Russian physicist Peter Lebedev in 1899, who experimented with metal sheets of differing levels of reflectivity to measure the effect of the exchange of momentum from photons. I mentioned above the Aurora Collaboration’s experimental work on layered sail construction, and in the early years of the 21st Century, Gregory and James Benford studied beamed sail technologies in a JPL lab.

Their findings are important as we move from straightforward solar sailing to the beamed variant that Robert Forward studied both for microwave and laser designs. As president of Microwave Sciences in Lafayette, CA, James Benford’s experience with microwaves led him to join with brother Gregory, a physicist and well-known science fiction writer, to use advances in materials technologies to attempt these laboratory experiments. Temperature was a key here: Working on Earth’s surface, a sail would have to overcome gravity, and to do that, the sail materials would need to be heated to temperatures higher than 1500 degrees Celsius.

Aluminum can’t handle that kind of punishment (its melting temperature is 660 degrees Celsius), and the problem persists with many potential metal sails. But carbon undergoes sublimation at temperatures above 3000 degrees Celsius, making the emergence of lightweight carbon structures as potential sail experiments the key. The Benfords used a 10-square centimeter sail in a vacuum chamber, demonstrating acceleration under a 10-kilowatt, 7 GHz microwave beam. Their sails remained intact after experiencing temperatures up to 1725 degrees Celsius.

The carbon microtruss used in the JPL work, developed by San Diego’s Energy Science Research Laboratories and ten times thinner than a human hair, handled the heat requirement with ease. In fact, the Benfords were able to observe accelerations of several gravities in their tests. They also saw a phenomenon known as ‘desorption,’ in which the rapid heating from the microwave beam evaporates molecules — CO2, hydrocarbons and hydrogen — incorporated into the sail during the manufacturing process, adding an interesting second source of acceleration to a sail. A carefully applied layer of compounds painted onto a sail thus creates a propulsive layer of its own.

Solar Sails notes the desorption findings, but the Benfords produced a result that I consider far more valuable. Their experiments have demonstrated that the pressure of a microwave beam will keep a concave-shaped sail in tension. The beam is itself producing a sideways restoring force. The terminology here is ‘beam-riding,’ and in the case of future sail designs, it means that a properly shaped sail will be stable under the intense beam that drives it.

Moreover, it becomes clear from this laboratory work that the beam can carry angular momentum which it can communicate to the sail. We have, then, a mechanism for allowing ground-based controllers to stabilize a beamed sail against yaw and drift. This important finding grows out of comparatively inexpensive experiment and meshes with ongoing efforts to study the deployment and control of conventional solar sails. What we are seeing is a technology track that holds the promise for space missions on both an interplanetary and interstellar scale.

Tomorrow I’ll continue this series on solar sail and beamed sailcraft with a look at near-term sail concepts discussed in Solar Sails and the mission needs that drive them.