When Les Johnson spoke to a session on sail technologies at the 100 Year Starship symposium in Houston last September, he startled some in the audience by going through a list of how many solar sail missions are now in the works. The European Space Agency’s Gossamer program accounts for one of these, which is already built and waiting for launch, but three are in the pipeline. The University of Surrey (UK) is a surprisingly active entrant, with three CubeSat sails set for flight in the next three years. We also have the Planetary Society’s LightSail to contend with, a CubeSat design with a 32 square meter sail when deployed. 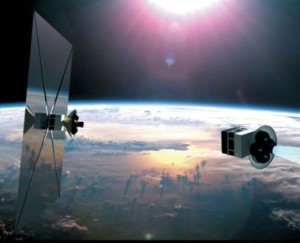 There are other missions as well, with names like NEA [Near Earth Asteroid] Scout, Lunar Flashlight, and although it is now in limbo at least for several years, NASA’s Sunjammer. The surge in interest in CubeSats is hard to miss here. They’re cheap, small, and ideal for trying out sail experiments as we try to figure out how best to use this technology in space. Master it and we have the possibility of sail-driven CubeSat missions sent deep into the Solar System, carrying miniaturized payloads and perhaps flown in ‘swarm’ configuration. And of course the lessons we learn should scale to the larger sails we hope to fly as we build expertise.

Johnson is deputy manager for NASA’s Advanced Concepts Office at the Marshall Space Flight Center in Huntsville, AL. He’s also an active writer of science fiction, most recently portraying — in a novel called Rescue Mode — a Mars mission’s crew on a crippled ship locked in a struggle for survival. Somehow he also finds time to write non-fiction, bringing his formidable background in space technology to bear in Solar Sails: A Novel Approach to Interplanetary Travel, which I’m examining this week as part of a series on sailcraft and their uses. A look at his Amazon offerings illustrates just how prolific Johnson has been in the past decade. [Note: I’m not going to link to the Solar Sails book again until the new edition is available, which should be soon].

Missions in the Near Term

Creating public interest in space is crucial for beginning the gradual spread into the Solar System that some of us think will lead to an infrastructure that can support eventual interstellar missions. After all, we’re asking government, which that same public funds, to play a major role here, even as we also explore what commercial initiatives can achieve. So it’s helpful to keep in mind that technologies have their particular niches. As we talk about multi-modal technologies tomorrow, we’ll consider the fact in greater detail. We’ll never get off the ground with a solar sail — we need rockets for that — but there are missions that even the best rocket design cannot fly.

We know from Tsiolkovsky’s rocket equation that carrying more and more propellant gets to be a non-starter, because soon we’re adding propellant just to push more propellant. Here a solar sail can offer unique opportunities. Suppose, for example, that we want to observe what’s going on at the Sun’s poles. Missions we’ve launched Sunward have tended to stay in the ecliptic because that’s where Earth is, which means we have limited views even of the mid-latitude regions.

From the long-term perspective that Centauri Dreams takes, the solar wind might offer propulsive possibilities for various magnetic sail designs. But we have to reckon with the fact that we don’t understand it well. This stream of charged particles can flow outward from the Sun’s equatorial regions at 400 kilometers per second, but much faster streams, up to 800 kilometers per second, seem to originate in the mid to upper latitude regions. This is just one of the things we’d like to study in addition to the factors that lead to solar plasma outbursts.

A highly inclined orbit around the Sun is a tough challenge for chemical rockets, but it’s realistic to design a Solar Polar Imager sailcraft that can take advantage of the sharp increase in photon ‘push’ available to it at 0.5 AU. Remember, it’s an inverse square law, so that if we halve the distance between Earth and the Sun, we get four times the solar flux on the sail. One mission concept under study calls for a square, 3-axis stabilized sail about 150 meters on the side.

Many sail concepts involve close study of the Sun, including missions to warn of solar storms. Consider that coronal mass ejections (CMEs) can crank out accelerated particles with a speed of ejection up to 1000 kilometers per second, a serious ‘gust’ in the solar wind. Protecting our current infrastructure involves shielding the satellite assets we rely on, including the GPS system and the telecommunications satellites that drive cable TV systems. Adequate warning means these can be powered down in the event of a solar storm, and reoriented to put as much onboard spacecraft mass as possible between key systems and incoming radiation.

Image: Solar flares and CMEs are currently the biggest “explosions” in our solar system, roughly approaching the power in one billion hydrogen bombs. Fast CMEs occur more often near the peak of the 11-year solar cycle, and can trigger major disturbances in Earth’s magnetosphere. Credit: NASA/GSFC.

The Advanced Composition Explorer (ACE) spacecraft is located at the L1 Lagrange point some 1.5 million kilometers from Earth, where it monitors the Sun for dangerous events. But the lead time for any warning is short, which emphasizes the need for a sailcraft that can be positioned between the Sun and the Earth. The current mission concept is called Heliostorm. It would use a square sail 70 meters to the side. A more advanced version with a circular sail 230 meters in radius could orbit the Sun at 0.70 AU, maintaining a direct line between Sun and Earth. Our solar storm warning time would go from the current one hour to between 16 and 31 hours.

Or consider the Mars sample return. It’s a high-priority item for astrobiology as we continue to learn about the Red Planet’s interesting past, but the fuel required not only to get our spacecraft to Mars but also to land, launch and return the sample is a demanding barrier to overcome. Instead, we can consider a lander sent to Mars by conventional rocket, one that collects the needed samples and returns them to Mars orbit. There we rendezvous with a sailcraft above Mars, eliminating the propellant mass we’d have otherwise needed for the return.

The list could go on, from ‘pole sitters’ that use solar photons to maintain a position over one of the Earth’s poles — useful for weather and environmental monitoring — to near earth asteroid reconnaissance, where sail propulsion allows a spacecraft to visit multiple NEA’s. The latter is a technology that couples nicely with the growing use of cubesats and miniaturized components, helping us characterize nearby asteroids in large numbers with swarm missions. I should mention too that a mission called L-1 Diamond is being examined that would use four sailcraft to study the Sun, orbiting it in a triangular formation with the fourth looking down at the pole.

So the range of missions is wide, and it extends as we gain expertise with sailcraft into ‘Sundiver’ missions of the sort that Gregory Matloff began writing about in the 1980s (an idea originally hatched by David Brin and Gregory Benford), which could lead to missions to the gravitational lens (550 AU) and even the Oort Cloud. One of the Solar Sails authors, Giovanni Vulpetti, has explored fast outer system missions in a 2012 book called Fast Solar Sailing (Springer). As our infrastructure builds, sail ‘clippers’ to Mars and other closer destinations may begin to supply distant colonists with the supplies they need.

One day, too, a large solar sail could conceivably be deployed near an asteroid on a dangerous trajectory, changing its reflectivity enough to alter its orbit over the course of decades. It’s a thought that takes me back to the Russian Znamya missions, ostensibly tests of a space mirror that might light Siberian cities at night, but for all intents and purposes a deployment shakeout of sail technologies. The potential of sails for interstellar missions continues to intrigue me, and I’ll be talking about sails and multi-modal propulsion designs for starships tomorrow. But building up our near-Earth infrastructure may be most economically served by near-term sails that can return data and haul supplies to support a civilization with a very deep frontier in mind.