On Monday I touched on the topic of multi-modal spacecraft, wondering whether future deep space missions might carry twin or even triple systems of propulsion. The example I want to tinker with is an interstellar craft driven by beamed energy, akin to some of Robert Forward’s designs in the 1980s. Forward went through enormous challenges trying to decelerate at the destination, though as we’ll see, he did come up with more than one solution.

A beamed laser sailcraft runs into this problem because the power source is in a close solar orbit, while the craft is reaching speeds that make a human crossing to another star possible. How to slow it down from behind? Deceleration is going to take a long time no matter what the method, but if we factor in a second mode of propulsion, a magnetic sail, we can brake against the destination star’s stellar wind. I mentioned on Monday as well that the Venture Star, the starship that got James Cameron’s crew to Alpha Centauri in the film Avatar, was depicted as a hybrid craft, with a Forward-style beamed lightsail to reach cruise and antimatter engines to slow upon arrival.

The Venture Star’s braking strategy involves the annihilation of matter and antimatter to heat up hydrogen propellant for thrust. Cameron’s use of enormous heat radiators also marks this craft, an indication that he tried for scientific accuracy where he could — Robert Frisbee is only one of the scientists who have noted the need to dissipate the heat from matter/antimatter reactions, and he was echoing the prescient Les Shepherd, who wrote about the issue back in 1952. 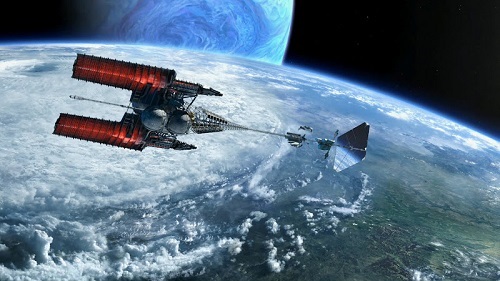 Image: The Venture Star wins points for accuracy in the details. Winchell Chung has a fine breakdown of its systems on his Project Rho site. Credit: 20th Century Fox.

Hybrid ideas for spacecraft don’t have to wait for science fictional futures, because we’re already seeing interesting steps in this direction. When the Japanese space agency JAXA successfully launched and operated the IKAROS space sail, it demonstrated a unique system of spacecraft control. The liquid crystal films located near the edges of the sail were installed for attitude control. Their reflectivity could be altered by applying a voltage to the strips. Experimenting with the method in 2010, JAXA successfully demonstrated attitude control torque using the method, an adjustment of reflectivity that bodes well for future hybrid methods.

There are various ways of manipulating a sailcraft’s attitude, all of them analyzed mathematically in Giovanni Vulpetti’s book Fast Solar Sailing (Springer, 2012), one of them being the change in reflectance used on IKAROS. I won’t get into the details, though you can find them in the book I’ve been tapping this week for ideas, Solar Sails: A Novel Approach to Interplanetary Travel, soon to be released by Springer in its second edition.

Manipulating vanes on a segmented sail, using small sails at the boom ends of the spacecraft, even the use of small rockets has been suggested. But sail reflectance and its alteration point us in new directions. Let me quote from Solar Sails on this:

The concept of thrust maneuvering for solar-photon sails is…more general than sail attitude control via mechanical actuators of conventional and/or advanced type. The above-mentioned experiment on IKAROS appears as a special device opening a new ‘seam’ of very advanced spacecraft.

How we can use changes in reflectance to alter solar sail trajectories in space is now under investigation at the University of Rome, a goal being to develop a comprehensive thrust model. That’s interesting stuff, because multiple attitude control systems give every indication of being both efficient and more fault-tolerant, since you’re carrying a backup system on-board. The suspicion here is that we’ve only begun to realize how these methods may affect future propulsion strategies as well. But it may be that JAXA is thinking well ahead on this matter. 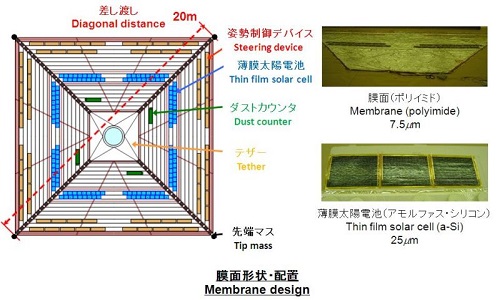 For IKAROS has already demonstrated sail deployment, attitude control and maneuverability, as well as showing — with its on-board gamma-ray burst detector — the ability of sails to serve as a platform for science missions. Scaling up such missions for further testing lies ahead, and the success of IKAROS has spurred the agency to continue with an ambitious sail mission to Jupiter that could be launched as early as 2020. Here we’re talking about another hybrid design, one that would use gravitational assists, a solar sail, and an ion engine to explore Jupiter’s magnetosphere, with an additional task of a flyby of at least one of Jupiter’s Trojan asteroids.

So we’re combining propulsive methods in this mission, one that should build our experience with the kind of maneuvering that may one day be used on ‘Sundiver’ missions that perform close flybys of the Sun. Called the Jupiter Magnetosphere Orbiter (JMO), the mission’s sail will upgrade the original IKAROS. Based on what has been published so far, it will be a square sail that measures about 100 meters to the side and like IKAROS will use a 7.5 micron polyimide for the sail material. The mass of sail and associated structure including inflatable booms should be in the range of 150 kilograms, with a total mass (including payload) in the range of 250 kilograms.

Giovanni Vulpetti’s name has kept coming up with respect to multi-modal propulsion because as I’ve investigated the concept, I’ve realized he has been studying what he calls ‘multiple propulsion mode’ for many years. At the end of this post I give references for two papers on the matter, the first (“Multiple Propulsion Concept: Theory and Performance”) dating back as far as 1979. In 1992, Vulpetti discussed a deep space vehicle driven by nuclear ion propulsion and a solar sail, much like the JMO spacecraft, at the first World Space Congress in Washington, DC.

The concept here is staging, but instead of coupling stages that each use the same propulsion strategy, we’ll use entirely different propulsion techniques. Staged propulsion spacecraft (this is Vulpetti’s term) are more or less forced upon us as we ponder the complexities of interstellar missions. Gregory Matloff, a fellow author of Vulpetti and Les Johnson on the Solar Sails book, was able to get mission times to Alpha Centauri — for a solar sail using a sundiver approach to the Sun — down to roughly 1000 years in papers he wrote for the Journal of the British Interplanetary Society in the 1980s. But solar sails are efficient only near a star. Can we use a solar sail by itself for needed deceleration?

More likely is the scenario where a sail or fusion-powered starship at least supplements its primary propulsion with something like a magnetic sail for braking against the stellar wind in the destination system. [Addendum: As noted in the comments, braking against a stellar wind won’t be a ‘years-long’ process because at these speeds the probe would cross the heliosphere within days. I was really thinking about braking against the interstellar medium, an idea that grows out of Bussard’s ramscoop ideas and the drag they have been found to create]. Tomorrow I’ll mention some of Robert Forward’s notions about the deceleration dilemma including staged sails, and explore other options, which hybrid missions seem to trump.