When he opened the Tennessee Valley Interstellar Workshop in Oak Ridge last week, Les Johnson told the audience that sessions would begin and end on time. Punctuality is a trait that I assume works well in Johnson’s day job at Marshall Space Flight Center, and it certainly was appreciated in Oak Ridge, where the delays and overruns that mar so many conferences just didn’t occur. That kept the pace brisk and the presenters solidly on topic throughout. 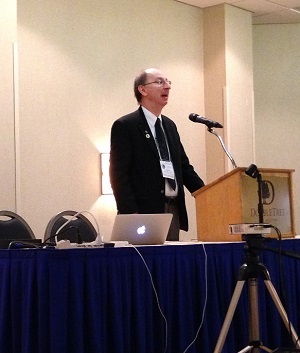 That sense of pace and direction is making TVIW into one of my favorite gatherings. Today I’m going to run through some of the presentations from the first day, beginning with the multidisciplinary note with which I closed yesterday’s post. What we gain by keeping a wide range of background in play among the presenters is a chance to spot hidden assumptions, some of which can prove deadly when not properly evaluated. Monday’s TVIW talks helped clarify what we’ve learned about the human presence in space and just how much we have yet to determine.

Problems of Survival in Deep Space

Biologist Robert Hampson (Wake Forest School of Medicine) was a familiar face when he took the podium on Monday morning, having appeared at the last TVIW in Huntsville. What Dr. Hampson brings to the table is a rich background in the neurosciences that includes research into cognition, behavior and learning.

All of these come into play when we’re talking about the issues astronauts will face when dealing with long-duration spaceflight. In Huntsville, Hampson had outlined our need for a biomedical research laboratory in weightless conditions, so that we could do the kind of detailed research into artificial gravity that we need before we can think about how to provide it on a mission. The Oak Ridge talk followed up on the idea, explaining the need for a livable habitat where access to vacuum and solar radiation is readily available. A further option would be to place it outside Earth’s magnetosphere to study radiation in that environment and how to mitigate it.

We tend to shrug off the gravity problem by assuming that we can create a rotating habitat, but the ‘tin cans on a string’ notion — two segments joined by a tether — leaves unanswered the question of how long the tether should be and how fast the rotation. The speed of rotation turns out to be critical because while the vestibular system can adapt to linear velocity, angular momentum is perceived as acceleration. Vertigo can be the result of a sudden head turn.

Moreover, all the work we’ve done in zero-g aboard vehicles like the International Space Station has led only to marginal results. Microcravity causes physiological changes that can range from loss of calcium to fluid retention to a reduction in muscle mass and a decrease in the volume and pumping capacity of the heart. Only gravity has the ability to resolve these problems, which is why we need the space lab to explore what forms artificial gravity can take. Hampson said that if astronauts took an extended zero-g mission to Mars, they might be unable to function upon arrival because of Mars’ own gravity, even though it is a paltry 38 percent of that found on Earth.

The lab design resulting from Hampson’s research would allow research subjects and scientists to live in an eight-deck space divided into two four-deck structures connected by a tether, an installation that contained both a human and animal lab, with each of the two segments creating about 1000 square feet of research space. Another significant issue for study here: The degradation of memory, found on Earth in those with radiation therapy for cancer, that can likewise be produced by an overdose of radiation in space. The ideal, then, would be to place the biomedical laboratory at the Earth-Moon L2 point outside the magnetosphere, where all these issues can be studied in the best environment for microbiological and biochemical tests.

Oak Ridge National Laboratory’s Fred Sloop also delved into the question of gravity’s effects, noting the huge role that evolution under 1 g has played in the development of our physiology. We’re already talking about private colony missions to places like Mars, but we have to overcome the factors Hampson talked about as well as the embrittlement of bone in zero-g, which can cause as much bone loss for an astronaut in a single month as a menopausal woman loses in a year. Bone demineralization appears most strongly in the pelvis, said Sloop, and with loss of bone we get calcium phosphate released into the body, along with calcium oxalate.

The result: The formation of kidney stones. We also see that extended microgravity causes muscle atrophy, with muscle mass down to 70 percent of preflight after 270 days in orbit. Fluid shifts occur as bodily fluids distribute to the upper portion of the body, a shift that can involve cardiovascular changes and a decrease in blood volume as the red blood cell count drops. The injury potential upon re-entry is significant, for on a long-duration mission, the spine can lengthen more than 7 centimeters. Changes in cognition and mental imagery can impair function.

Sloop believes that despite mechanical countermeasures — MIT, for example, is studying a ‘skin suit’ that mimics a 1 g load on bone and muscle — the best recourse will be artificial gravity created by rotation. “We need to find out what the minimum gravity to retain physiological health really is,” Sloop added. “Is 1 g necessary, or can we get by with less? Mars gravity at .38 g may be sufficient for long-term colonists once they have arrived, but at this point we don’t really know.” In space, a nominal design for a 1 g habitat rotating at 4 rpms with a rotational radius of 56 meters may work, but will it ward off these ills over a 30-month mission to Mars?

A Historical Perspective on Colonization

You can see why rushing a deep-space mission under the assumption that we have sufficient experience in nearby space would be a mistake. But the issues aren’t solely biological. Sam Lightfoot (South Georgia State College) tackled the assumptions we bring with us when we attempt to colonize new lands, as revealed in historical precedent. The first colony planted by the Spanish in the United States was not St. Augustine but an attempt in the barrier islands of Georgia by the conquistador Lucas Vazquez de Ayllon, who landed in the area in 1526.

Allyon thought he had brought what he needed — after all, he had tools, livestock and weapons — but many of the tools proved unsuited to the environment. Allyon’s horses did not adapt well in the humid, sandy islands, and European methods of farming failed. The colony’s maps were incomplete and inaccurate, water was in short supply and disease became rampant. Unwilling to exploit local food resources, the colonists refused to eat wheat. Their housing disintegrated because they were using wattle and daub techniques suited for the dry climate of Spain.

Allyon, whose colony had to be evacuated back to Havana, was one of a string of failures whose colonization efforts have been all but forgotten. Pánfilo de Narváez made even Allyon’s attempt look good. Equally unprepared for the actual conditions he found, de Narváez took over 300 conquistadores with him, a group with few skills adapted to local conditions. Only four of his men would survive the colonization attempt, walking up the length of Florida and making their way somehow to Mexico City. In sharp contrast, Hernando de Soto was able to survive because he brought equipment suited to the terrain, along with flexibility in leadership.

The lessons are clear enough, and even more stark when we consider that the next wave of human colonization will be in an environment far more unyielding, and much more difficult to reach and resupply, than even the conquistadores had to contend with. I took away from these multidisciplinary sessions the need to question our most basic assumptions. Fred Sloop’s point about Mars’ gravity stands out: We don’t really know whether humans living at 0.38 g will be able to survive over the long haul. Such basic questions drive the need for research into areas we have found difficult to explore with the existing space infrastructure in low Earth orbit.

More tomorrow as I turn to issues not just of planetary but interstellar migration, looking at presentations that covered everything from beamed sails to ‘worldship’ habitats and the possibilities for space drives. Can we imagine a day when artificial intelligence and additive manufacturing produces the space infrastructure we need in decades rather than centuries? The Tennessee Valley Interstellar Workshop was an opportunity to talk about issues like these not only in the sessions but in informal dinner conversation. More about the proceedings tomorrow.