One thing the Tennessee Valley Interstellar Workshop did not offer was a lot of spare time. Les Johnson told attendees at the beginning that we would be working straight through. Between presentations and workshop sessions, that was pretty much the case, with no break at all between an 8:00 start and lunch, and afternoon sessions punctuated by breakout workshop sessions on four topics: communications and SETI; biology in small ecosystems; safety issues for interstellar missions; and a competition to reverse-engineer famous starships from science fiction literature. I finished up the after-dinner workshop session around 9:30 that first night.

An Encounter with ‘Dr. SETI’

It was a pleasure to finally meet the SETI League’s Paul Shuch in Oak Ridge. Paul and I have exchanged email for some time now, mostly about material we might use on our respective sites, and I’ve long admired the engineering and leadership skills he brings to a SETI all-sky survey that coordinates the efforts of 127 small receiving stations around the world. If you’re not aware of his Searching for Extraterrestrial Intelligence (Springer, 2011), realize that it contains 26 essays not only from some of SETI’s biggest names but also science fiction writers like Stephen Baxter and David Brin in encapsulating the key issues of the field. 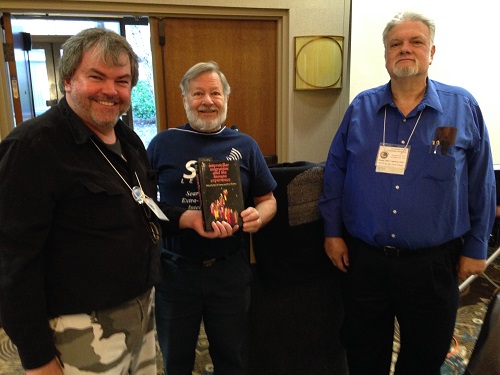 Introduced by David Fields of Tamke-Allen Observatory at nearby Roane State Community College, Shuch ran through a synopsis of SETI’s history at the conference. He lingered over the beginnings of radio astronomy, when Karl Jansky tried to chase down the source of the interference that Bell Telephone Laboratories was picking up in trans-Atlantic communications (he was detecting the galactic center), and also pointed to Grote Reber, the Illinois ham radio operator who was, back in the 1930s and for almost a decade, the only practicing radio astronomer in the world. Paul’s discussion of the Ohio State WOW! signal, logged by a surprised Jerry Ehman in 1977, reminded me how much the enigmatic reception still haunts us.

A chance reception of an extraterrestrial beacon? If so, it was one that only swept past our planet, for the WOW signal was never detected again despite later efforts, and we’ll surely never know its true origin. Nor can we jump to conclusions, remembering Frank Drake’s first strong Project Ozma signal. It seemed to come from Epsilon Eridani (could SETI be this easy, Drake wondered?), but as Shuch explained, it turned out to be the reception of a U-2 spy plane, then highly classified but about to become public news after the shootdown of Francis Gary Powers.

Decades ago I wrote up a few articles for the journal of the Society of Amateur Radio Astronomers (SARA), a non-engineer addressing an audience of crack equipment makers and instrument tweakers. I hate to think how many mistakes I made in my analysis of the Drake Equation back then, but it’s a pleasure to recall those days considering Paul’s advocacy of SARA and the recent loss of Mike Gingell, a good friend and SARA member who had known Paul from meetings at Green Bank (where Project Ozma was born) and had a substantial backyard antenna array of his own.

The Beamed Sail and Survival

Jim Benford’s work on beamed sails continues under the aegis of Project Forward, an attempt to characterize and advance the science on strategies to get a sail up to interstellar velocities. Deployment of large sails is always an issue, but spin deployment has been demonstrated in the laboratory, with sails unfolding from their tight packages like Japanese origami. The big capital cost goes into the transmitters — a phased array left behind in the Solar System — with major expenses in operating the beamer that make the construction of each individual sail relatively inexpensive in contrast. Build the infrastructure and you can launch many missions.

These are going to be installations that will require considerable expertise at handling large construction projects in space. In Benford’s words:

“We are going to have to learn the art of building very large arrays, and we’re going to have to build them in space. We know how to build the transmitters, but the structures will be on the scale of hundreds of kilometers, creating the same issues we will face in space-based solar power projects. Construction in space will invariably be managed by robots. Early work in that direction can be seen in SpiderFab, a robotic construction idea being studied by NASA.”

This wasn’t the only time SpiderFab came up at Oak Ridge, as we’ll see in a moment. The idea, championed by Robert Forward’s company Tethers Unlimited, would use 3D printing methods to build the needed systems without further human intervention. Robert Hoyt, a co-founder of Tethers Unlimited, describes SpiderFab as combining “… the techniques of fused deposition modeling (FDM) with methods derived from automated composite layup to enable rapid construction of very large, very high-strength-per-mass, lattice-like structures combining both compressive and tensile elements.” What you wind up with is a way to incorporate high-strength materials into system components like antennas that are optimized for space conditions.

Beamer pointing accuracy will have to be extreme, presenting a major challenge for sailship missions. The accuracy needed, Benford said, is micro-radian for early work, more or less the state of the art in the phased arrays used by the military. Taking a sailcraft all the way to the Oort Cloud would require accuracy to reach the nano-radian level, and would push into pico-radians when we’re talking about actual interstellar missions. A key here is that as the pointing accuracy of the array lowers, the acceleration on the sail has to increase because it will not be able to stay under a tightly focused beam as long as it would with a more precise array. 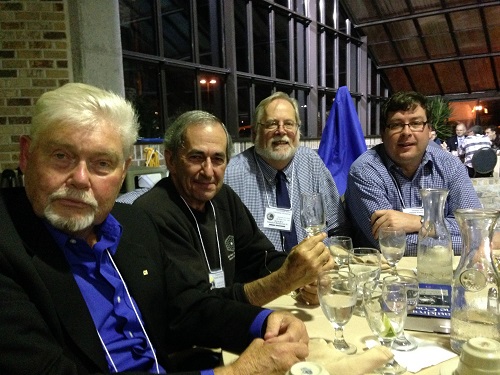 What a pleasure to spend time at dinner not only with Benford but James Early, who has written up (with Richard London) ideas on how sails will interact with the interstellar medium. The researchers worked with a beryllium sail as a reference point and studied the effect of local interstellar dust on both sail and payload. In this study, dust grains and atoms of interstellar gas actually pass through the thin sail materials with little loss of energy, creating scant damage.

Moreover, sails turn out to offer a way of protecting the interstellar vehicle because the deployed thin foil offers a way to convert dust grains or neutral gas atoms into free electrons and ions. “These charged particles,” the authors write, “can then be easily deflected away from the vehicle with electrostatic shields.” I wrote these ideas up in a 2012 essay called Lightsails: Safe Passage After All?, but I want to catch up with Early to see whether he’s done further work on the matter. The original paper is “Dust Grain Damage to Interstellar Laser-Pushed Lightsail,” Journal of Spacecraft and Rockets, July-Aug. 2000, Vol. 37, No. 4, pp. 526-531.

SpiderFab certainly has its advocates, as do any ideas that advance the notion of building deep space structures on large scales. Andreas Hein, who is not only deputy director of the Initiative for Interstellar Studies but also the head of Project Hyperion for Icarus Interstellar, has been asking whether current trends in engineering — and SpiderFab is certainly indicative of one of these — point to a future where even highly complex products can be produced in a fraction of the time they currently demand. Where do projects like SpiderFab ultimately take us? 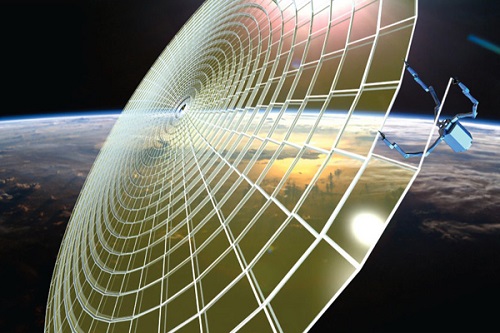 The factors in play are numerous and include the advent of mass customization, highly flexible production lines, additive manufacturing (3D printing) and artificial intelligence in the factory. As computation leads to the replacement of cognitive tasks, we are exploring new domains in design that in the future may allow us to automate a function we always considered purely human: Our innate creativity. As engineers deal with higher-level building blocks, Hein noted, productivity increases as the technological ecosystem increasingly becomes commoditized.

“A smartphone is today’s case in point,” Hein said. “We have the computing capability to make it the basis of a CubeSat surrounded by the added supporting structure, a satellite that can be created for approximately $3500. Mass produced technology opens up opportunities like this. Additive manufacturing, ubiquitous computing, the ‘Internet of things’ and artificial intelligence are all relevant for a future in which we will create complex systems in space on demand.”

It’s an optimistic trend that when extrapolated to 2060, as Hein did, gives us the possibility of serious deep space missions funded by private capital, assuming the continued growth not only of engineering productivity but of wealth. Whether or not these trends cooperate is another matter, for we can’t anticipate social or economic upheaval that can break our best projections. But taking a shot at a perceived future is a way to provoke scientific thought, not to mention stimulating the minds of science fiction authors, of which there were several in Oak Ridge. It will be interesting to see what stories may spin out of the ideas they heard described at TVIW.