Slingshot to the Stars

Back in the 1970s, Peter Glaser patented a solar power satellite that would supply energy from space to the Earth, one involving space platforms whose cost was one of many issues that put the brakes on the idea, although NASA did revisit the concept in the 1980’s and 90’s. But changing technologies may help us make space-based power more manageable, as John Mankins (Artemis Innovations) told his audience at the Tennessee Valley Interstellar Workshop.

What Mankins has in mind is SPS-ALPHA (Solar Power Satellite by means of Arbitrarily Large Phased Array), a system of his devising that uses modular and reconfigurable components to create large space systems in the same way that ants and bees form elegant and long-lived ecosystems on Earth. The goal is to harvest sunlight using thin-film reflector surfaces as part of an ambitious roadmap for solar power. Starting small — using small satellites and beginning with propulsion stablization modules — we begin scaling up, one step at a time, to full-sized solar power installations. The energies harvested are beamed to a receiver on the ground. 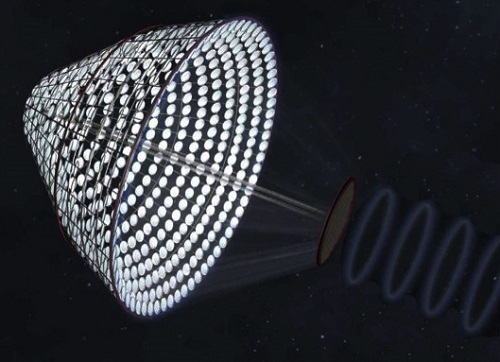 All this is quite a change from space-based solar power concepts from earlier decades, which demanded orbital factories to construct and later maintain the huge platforms needed to harvest sunlight. But since the late 1990s, intelligent modular systems have come to the fore as the tools of choice. Self-assembly involving modular 10 kg units possessed of their own artificial intelligence, Mankins believes, will one day allow us to create structures of sufficient size that can essentially maintain themselves. Thin-film mirrors to collect sunlight keep the mass down, as does the use of carbon nanotubes in composite structures.

There is no question that we need the energy if we’re thinking in terms of interstellar missions, though some would argue that fusion may eventually resolve the problem (I’m as dubious as ever on that idea). Mankins harked back to the Daedalus design, estimating its cost at $4 trillion and noting that it would require an in-space infrastructure of huge complexity. Likewise Starwisp, a Robert Forward beamed-sail design, which would need to power up beamers in close solar orbit to impart energy to the spacecraft. Distance and time translates into energy and power.

Growing out of the vast resources of space-based solar power is a Mankins idea called Star Sling, in which SPS-ALPHA feeds power to a huge maglev ring as a future starship accelerates. Unlike a fusion engine or a sail, the Star Sling allows acceleration times of weeks, months or even years, its primary limitation being the tensile strength of the material in the radial acceleration direction (a fraction of what would be needed in a space elevator, Mankins argues). The goal is not a single starship but a stream of 50 or 100 one to ten ton objects sent one after another to the same star, elements that could coalesce and self-assemble into a larger starship along the way.

Like SPS-ALPHA itself, Star Sling also scales up, beginning with an inner Solar System launcher that helps us build the infrastructure we’ll need. Also like SPS-ALPHA, a Star Sling can ultimately become self-sustaining, Mankins believes, perhaps within the century:

“As systems grow, they become more capable. Consider this a living mechanism, insect-class intelligences that recycle materials and print new versions of themselves as needed. The analog is a coral atoll in the South Pacific. Our systems are immortal as we hope our species will be.”

All of this draws from a 2011-2012 Phase 1 project for the NASA Innovative Advanced Concepts program on SPS-ALPHA, one that envisions “…the construction of huge platforms from tens of thousands of small elements that can deliver remotely and affordably 10s to 1000s of megawatts using wireless power transmission to markets on Earth and missions in space.” The NIAC report is available here. SPS-ALPHA is developed in much greater detail in Mankins’ book The Case for Space Solar Power.

Ultra-Lightweight Probes to the Stars

Knowing of John Rather’s background in interstellar technologies (he examined Robert Forward’s beamed sail concepts in important work in the 1970s, and has worked with laser ideas for travel and interstellar beacons in later papers), I was anxious to hear his current thoughts on deep space missions. I won’t go into the details of Rather’s long and highly productive career at Oak Ridge, Lawrence Livermore and the NRAO, but you can find a synopsis here, where you’ll also see how active this kind and energetic scientist remains.

Like Mankins, Rather (Rather Creative Innovations Group) is interested in structures that can build and sustain themselves. He invoked self-replicating von Neumann machines as a way we might work close to the Sun while building the laser installations needed for beamed sails. But of course self-replication plays out across the whole spectrum of space-based infrastructure. As Rather noted:

“Tiny von Neumann machines can beget giant projects. Our first generation projects can include asteroid capture and industrialization, giving us the materials to construct lunar colonies and expand to Mars and the Jovian satellites. We can see some of the implementing technologies now in the form of MEMS – micro electro-mechanical systems – along with 3D printers. As we continue to explore tiny devices that build subsequent machines, we can look toward expanding from colonization of our own Solar System into the problems of interstellar transfer.”

Building our system infrastructure requires cheap access to space. Rather’s concept is called StarTram, an electromagnetic accelerator that can launch unmanned payloads at Mach 10 (pulling 30 g’s at launch). The key here is to drop launch costs down from roughly $20,000 per kilogram to $100 per kilogram. Using these methods, we can turn our attention to asteroid materials that can, via self-replicating von Neumann technologies, build solar concentrators, lightsails and enormous telescope apertures (imagine a Forward-class lens 1000-meters in radius). 100-meter solar concentrators could change asteroid orbits for subsequent mining.

This is an expansive vision that comprises a blueprint for an eventual interstellar crossing. With reference to John Mankins’ Star Slinger, Rather mused that a superconducting magnetically inflated cable 50,000 kilometers in radius could be spun around the Earth, allowing the kind of solar power concentrator just described to power up the launcher. Taking its time to accelerate, a lightweight probe could reach three percent of lightspeed within 300 days, launching a 30 kg payload to the stars. The macro-engineering envisioned by Robert Forward still lives, to judge from both Rather’s and Mankins’ presentations, transformed by what may one day be our ability to create the largest of structures from tiny self-replicating machines.

Back when I was writing Centauri Dreams in 2004, I spent some time at Marshall Space Flight Center in Huntsville interviewing people like Les Johnson and Sandy Montgomery, who were both in the midst of the center’s work on advanced propulsion. A major player in the effort that brought us NanoSail-D, Sandy has been interstellar-minded all long, as I discovered the first time I talked to him. I had asked whether people would be willing to turn their back on everything they ever knew to embark on a journey to another star, and he reminded me of how many people had left their homes in our own history to voyage to and live at the other side of the world. 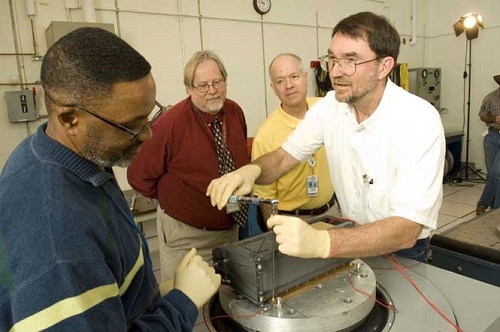 Image: Edward “Sandy” Montgomery, NanoSail-D payload manager at Marshall (in the red shirt) and Charlie Adams, NanoSail-D deputy payload manager, Gray Research, Huntsville, Ala. look on as Ron Burwell and Rocky Stephens, test engineers at Marshall, attach the NanoSail-D satellite to the vibration test table. In addition to characterizing the satellite’s structural dynamic behavior, a successful vibration test also verifies the structural integrity of the satellite, and gauges how the satellite will endure the harsh launch environment. Credit: NASA/MSFC/D. Higginbotham.

We’re a long way from making such decisions, of course, but Montgomery’s interest in Robert Forward’s work has stayed active, and in Oak Ridge he described a way to power up a departing starship that didn’t have to rely on Forward’s 1000-kilometer Fresnel lens in the outer Solar System. Instead, Montgomery points to building a power collector in Mercury orbit that would use optical and spatial filtering to turn sunlight into a coherent light source and stream it out into the Solar System through a series of relays built out of lightweight gossamer structures.

Work the calculations as Montgomery has and you wind up with 23 relays between Earth orbit and the Sun, with more extending deeper into the Solar System. Sandy calls this a ‘solar power pipeline’ that would give us maximum power for a departing sailcraft. The relaying of coherent light has been demonstrated already in experiments conducted by the Department of Defense, in a collector and re-transmitter system developed by Boeing and the US Air Force. Although some loss occurs because of jitter and imperfect coatings, the concept is robust enough to warrant further study. I suspect Forward would have been eager to run the calculations on this idea.

Les Johnson closed the formal proceedings at TVIW late on the afternoon of the 11th, and that night held a public outreach session, where I gave a talk running through the evolution of interstellar propulsion concepts in the last sixty years. Following that was a panel with science fiction writers Sarah Hoyt, Tony Daniel, Baen Books’ Toni Weisskopf and Les Johnson on which I, a hapless non-fiction writer, was allowed to have a seat. A book signing after the event made for good conversations with a number of Centauri Dreams readers.

All told, this was an enthusiastic and energizing conference. I’m looking forward to TVIW 2016 in Chattanooga. What a pleasure to spend time with these people.