A common trope from Hollywood’s earlier decades was the team of explorers, or perhaps soldiers, lost in the desert and running out of water. On the horizon appears an oasis surrounded by verdant green, but it turns out to be a mirage. At the University of Washington, graduate student Rodrigo Luger and co-author Rory Barnes have deployed the word ‘mirage’ to describe planets that, from afar, look promisingly like a home for our kind of life. But the reality is that while oxygen may be present in their atmospheres, they’re actually dry worlds that have undergone a runaway greenhouse state.

This is a startling addition to our thinking about planets around red dwarf stars, where the concerns have largely revolved around tidal lock — one side of the planet always facing the star — and flare activity. Now we have to worry about another issue, for Luger and Barnes argue in a paper soon to be published in Astrobiology that planets that form in the habitable zone of such stars, close in to the star, may experience extremely high surface temperatures early on, causing their oceans to boil and their atmospheres to become steam. 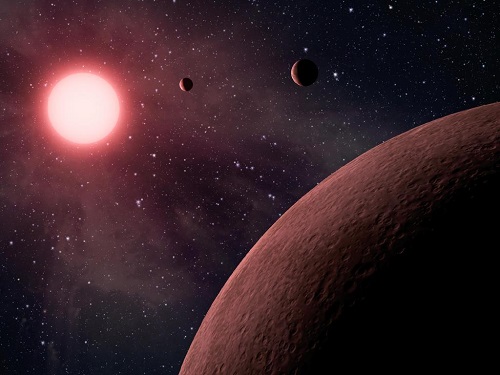 The problem is that M dwarfs can take up to a billion years to settle firmly onto the main sequence — because of their lower mass and lower gravity, they take hundreds of millions of years longer than larger stars to complete their collapse. During this period, a time when planets may have formed within the first 10 to 100 million years, the parent star would be hot and bright enough to heat the upper planetary atmosphere to thousands of degrees. Ultraviolet radiation can split water into hydrogen and oxygen atoms, with the hydrogen escaping into space.

Left behind is a dense oxygen envelope as much as ten times denser than the atmosphere of Venus. The paper cites recent work by Keiko Hamano (University of Tokyo) and colleagues that makes the case for two entirely different classes of terrestrial planets. Type I worlds are those that undergo only a short-lived greenhouse effect during their formation period. Type II, on the other hand, comprises those worlds that form inside a critical distance from the star. These can stay in a runaway greenhouse state for as long as 100 million years, and unlike Type I, which retains most of its water, Type II produces a desiccated surface inimical to life.

Rodrigo and Barnes, extending Hamano’s work and drawing on Barnes’ previous studies of early greenhouse effects on planets orbiting white and brown dwarfs as well as exomoons, consider this loss of water and build-up of atmospheric oxygen a major factor in assessing possible habitability. From the paper:

During a runaway greenhouse, photolysis of water vapor in the stratosphere followed by the hydrodynamic escape of the upper atmosphere can lead to the rapid loss of a planet’s surface water. Because hydrogen escapes preferentially over oxygen, large quantities of O2 also build up. We have shown that planets currently in the HZs of M dwarfs may have lost up to several tens of terrestrial oceans (TO) of water during the early runaway phase, accumulating O2 at a constant rate that is set by diffusion: about 5 bars/Myr for Earth-mass planets and 25 bars/Myr for super-Earths. At the end of the runaway phase, this leads to the buildup of hundreds to thousands of bars of O2, which may or may not remain in the atmosphere.

Thus the danger in using oxygen as a biosignature: In cases like these, it will prove unreliable, and the planet uninhabitable despite elevated levels of oxygen. The key point is that the slow evolution of M dwarfs means that their habitable zones begin much further out than they will eventually become as the star continues to collapse into maturity. Planets that are currently in the habitable zone of these stars would have been well inside the HZ when they formed. An extended runaway greenhouse could play havoc with the planet’s chances of developing life.

Even on planets with highly efficient surface sinks for oxygen, the bone-dry conditions mean that the water needed to propel a carbonate-silicate cycle like the one that removes carbon dioxide from the Earth’s atmosphere would not be present, allowing the eventual build-up of a dense CO2 atmosphere, one that later bombardment by water-bearing comets or asteroids would be hard pressed to overcome. In both cases habitability is compromised.

So a planet now in the habitable zone of a red dwarf may have followed a completely different course of atmospheric evolution than the Earth. Such a world could retain enough oxygen to be detectable by future space missions, causing us to view oxygen as a biosignature with caution. Says Luger: “Because of the oxygen they build up, they could look a lot like Earth from afar — but if you look more closely you’ll find that they’re really a mirage; there’s just no water there.”

The paper is Luger and Barnes, “Extreme Water Loss and Abiotic O2 Buildup On Planets Throughout the Habitable Zones of M Dwarfs,” accepted at Astrobiology (preprint). The paper by Hamano et al. is “Emergence of two types of terrestrial planet on solidification of magma ocean,” Nature 497 (30 May 2013), pp. 607-610 (abstract). A University of Washington news release is also available.