We’re going to be bringing both space- and ground-based assets to bear on the detection of rocky planets within the habitable zone in coming years. Cool M-class stars (red dwarfs) stand out in this regard because their habitable zones (in this case defined as where water can exist in liquid form on the surface) are relatively close to the parent star, making for increased likelihood of transits as well as a larger number of them in a given time period. Ground observatories like the Giant Magellan Telescope and the European Extremely Large Telescope should be able to perform spectroscopic studies of M-class planets as well.

So consider this: We have a high probability for planets around these stars (see Ravi Kopparapu’s How Common Are Potential Habitable Worlds in Our Galaxy?), and then factor in what Ramses Ramirez and Lisa Kaltenegger have, the fact that before they reach the main sequence, M-class stars go through a period of ‘infancy’ that can last up to 2.5 billion years. It’s an important period in the life of any planets around them because, as we saw last week in a paper by Rodrigo Luger and Rory Barnes, huge water loss can occur and there is the possibility for runaway greenhouse events that complicate a planet’s habitability.

But we need to keep digging at this issue because early M-dwarf planets are interesting targets for detection. In their new paper, Ramirez and Kaltenegger (Cornell University) point out that in the period before entering the main sequence, these stars have a luminosity much higher relative to their early main sequence values than F or G stars. In fact, an M8 star can be 180 times as bright during its contraction stage as it will be when entering the main sequence. Our G-class Sun, by contrast, was only twice as bright during this period.

What we get is a habitable zone that is located further away from the young star than we would otherwise expect, in a pre-main sequence period that, for some of the smallest stars, can last for over two billion years, meaning there is the potential for life to develop on the surface, perhaps moving below ground as the star’s luminosity gradually declines. The paper computes the luminosities of stars in classes F through M as they go through the contracting phase and onto the main sequence, with clear effects on the orbital distance of the habitable zone around the star. 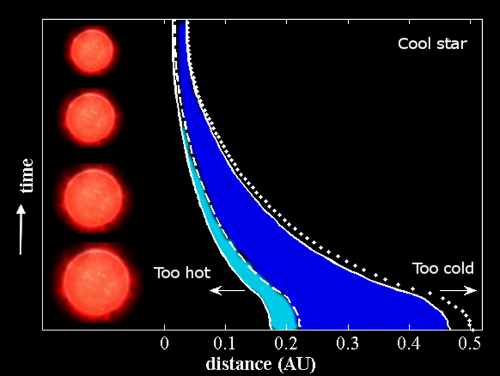 The coolest of these stars, an M8 dwarf, shows an inner zone of the HZ at 0.16 AU that moves to 0.01 AU at the end of the 2.5 billion year pre-main sequence phase. In the same period, the outer edge of the HZ moves from 0.45 AU to 0.3 AU. Contrast that with our Sun, where the inner HZ edge changes from 1 AU to 0.6 AU at the end of the pre-main sequence stage after a comparatively swift 50 million years. The Sun’s outer HZ edge moves from 2.6 AU to 1.5 AU. Variations in planetary mass appear to have only a small effect on these results.

The potential for water loss on the planets of young M-class stars is enormous, much higher for this than other stellar types. Ramirez and Kaltenegger shows that planets orbiting an M8 star at distances corresponding to the inner and outer main sequence habitable zone could lose up to 3800 and 225 Earth oceans of water respectively. An M5 planet loses 350 and 15 oceans respectively, while an M1 world loses 25 and 0.5 oceans. If we look at K5 and G2-class stars, their planets at the inner and outer habitable zone lose 1.3 and 0.75 Earth oceans respectively. These figures, remember, are for planets that end up being in the habitable zone later in the star’s life, when it is firmly established on the main sequence.

Is this water loss a fatal blow to the planet’s chances for habitability? Ramirez and Kaltenegger think not, a point that is worth emphasizing. From the paper:

Our results… suggest that planets later located in the MS HZ orbiting stars cooler than ~ a K5 may lose most of their initial water endowment. However M-dwarf MS HZ planets could acquire much more water during accretion than did Earth (Hansen, 2014), or water-rich material could be brought in after accretion, through an intense late heavy bombardment (LHB) period similar to that in our own Solar System (Hartmann 2000; Gomes et al. 2005). The second mechanism requires that both the gas disk has dissipated and the runaway greenhouse stage has ended.

The situation of our own Earth is not without interest here. Ramirez commented on the issue in this Cornell news release:

“Our own planet gained additional water after this early runaway phase from a late, heavy bombardment of water-rich asteroids,” says Ramirez. “Planets at a distance corresponding to modern Earth or Venus orbiting these cool stars could be similarly replenished later on.”

We can also factor in possible planetary migration, bringing planets rich in volatiles into the habitable zone after the star has reached the main sequence. Bear in mind that the pre-main sequence period can last 195 million years for an M1 star and up to 2.42 billion for a cool M8, meaning that a planet that has lost its water through this ‘bright young star’ period could regain water and become habitable even before the star reaches the main sequence.

In terms of searching for small, rocky planets with the potential for life, then, we need to keep in mind how much farther out the habitable zone is during a young star’s pre-main sequence phase, for the larger separation between planet and star will make such planets easier to find with next-generation telescopes. This work shows that planets around stars in spectral type K5 and cooler — those that will later be located in the habitable zone during the star’s main sequence phase — can easily receive enough stellar flux to lose much or all of their water. They will need to accrete more water than Earth did or else rely on water delivered through later bombardment. They are prime candidates for remote observation and characterization.

Moreover, we learn here that planets outside the habitable zone during the star’s stay on the main sequence may once have had conditions right for life to develop, with the potential for continuing beneath the surface as the star cools. “In the search for planets like ours out there, we are certainly in for surprises,” says Kaltenegger, and it’s clear that young stars, especially M-dwarfs, offer rich targets for observation as we parse out what makes a planet habitable.

The paper is Ramirez and Kaltenegger, “The Habitable Zones of Pre-Main-Sequence Stars,” in press at Astrophysical Journal Letters (preprint).