Where did the water in Earth’s oceans come from? It’s an open question, but new data from the Rosetta mission, in particular its ROSINA instrument (Rosetta Orbiter Spectrometer for Ion and Neutral Analysis) indicate that terrestrial water probably did not come from comets like 67P/Churyumov-Gerasimenko, around which Rosetta has been orbiting since August. There is little doubt that water reached Earth through bombardment from small bodies early in the planet’s history, but the Rosetta findings sharpen the question of where these objects came from. 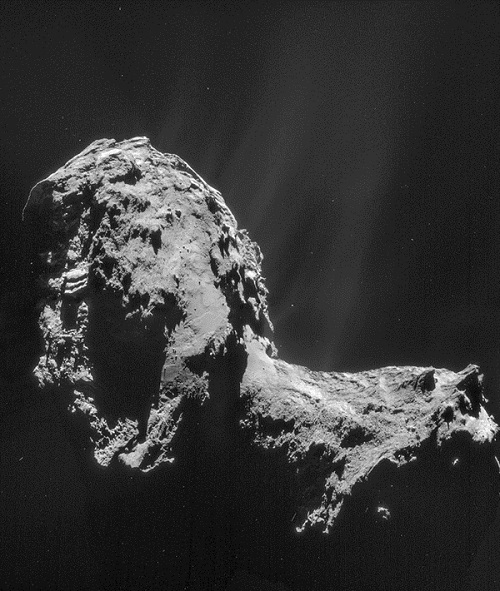 Image: This composite is a mosaic comprising four individual NAVCAM images taken from 19 miles (31 kilometers) from the center of comet 67P/Churyumov-Gerasimenko on Nov. 20, 2014. The image resolution is 10 feet (3 meters) per pixel. Credit: ESA.

At work here is analysis of the ratio between hydrogen and deuterium, a heavy form of hydrogen with one proton and one neutron in the nucleus (common hydrogen lacks the neutron). This D/H ratio on 67P/Churyumov-Gerasimenko turns out to be over three times the terrestrial value, among the highest values yet measured in the Solar System, making it unlikely that comets like these supplied Earth’s oceans. Back in 1986, the European Giotto mission to comet Halley found a D/H ratio twice that of Earth’s, seeming to rule out Oort Cloud comets as the source.

67P/Churyumov-Gerasimenko and Halley are two different kinds of comet, so let’s explore this. Cometary origins are complex because of interactions in the early Solar System. Long-period comets that swing into the inner system from the distant Oort Cloud are thought to have formed originally somewhere beyond the snowline in the region where Uranus and Neptune now orbit, to be scattered by subsequent gravitational interactions with the large outer planets. 67P/Churyumov-Gerasimenko is a Jupiter-family comet, a class whose origins are believed to lie beyond Neptune in the Kuiper Belt. Comets like these sometimes have their orbits disrupted so that they fall under the gravitational influence of Jupiter, hence their designation.

In contrast to 67P/Churyumov-Gerasimenko, comet Hartley 2, which was examined by the European Space Agency’s Herschel spacecraft in 2011, turned out to have a deuterium/hydrogen ratio similar to Earth’s. The discrepancy is surprising because Hartley 2 is also a Jupiter-family comet, and models of the early Solar System produce a D/H ratio for these comets more like 67P/Churyumov-Gerasimenko, even higher than their Oort Cloud cousins.

The disparity may indicate that we know less about Jupiter-family comets and their origins than we realized. The new Rosetta data tell us that this family of comets is hardly uniform, and thus nudge us away from them and toward asteroids as the primary water delivery mechanism. Kathrin Altwegg (University of Bern) is principal investigator for the ROSINA instrument and lead author of the paper on this work, which has just appeared in Science:

“This surprising finding could indicate a diverse origin for the Jupiter-family comets – perhaps they formed over a wider range of distances in the young Solar System than we previously thought. Our finding also rules out the idea that Jupiter-family comets contain solely Earth ocean-like water, and adds weight to models that place more emphasis on asteroids as the main delivery mechanism for Earth’s oceans.”

The measurements in question were made in the first month after Rosetta’s arrival at 67P/Churyumov-Gerasimenko. With the Rosetta data, we now have D/H information about eleven comets, finding that only Hartley 2 shows a ratio matching the composition of Earth’s water. We also know that meteorites with an origin in the asteroid belt show a good fit with Earth’s D/H ratio. Although the overall water content of asteroids is lower than we find in comets, a large number of asteroid impacts could account for the primary delivery mechanism.

Meanwhile, the mission continues, and will for some time. Rosetta has now been at 67P/Churyumov-Gerasimenko for 127 days. Perihelion is 244 days away.