Of an Archive on the Moon

Lunar Mission One is an interesting private attempt to put a payload on the lunar surface, a crowdsourced project aimed at doing good science and deepening public participation in spaceflight. Remembering the Apollo days, I’m always interested in seeing what can be done to renew interest in space, and having the chance to make a contribution toward such a self-starting space mission is undeniably attractive. As witness Lunar Mission One’s pitch on Kickstarter, which has aimed for an ambitious £600,000 and has already raised £520,341.

That figure is as of this morning, with five days to go in the attempt, and it’s clear enough that £600,000 won’t buy a lunar mission of considerable complexity, as this one is. But it’s enough to take an effort that has been seven years in the building to the next level, which means establishment of working management teams and the beginning of procurement planning and risk assessment. That turns what has been a part-time volunteer project into a full-time effort.

Writing about a lunar mission is a bit out of the norm for Centauri Dreams, where I decided from the beginning to adopt a focus on the outer planets and beyond, meaning deep space technologies that could lead to an eventual interstellar effort and all that entails. But what caught my eye about Lunar Mission One is that there is a ‘deep time’ aspect to the whole thing, one that looks past short-term results to think about the future of the species and how we can connect to it. The connection grows out of Lunar Mission One’s ambitious science agenda. 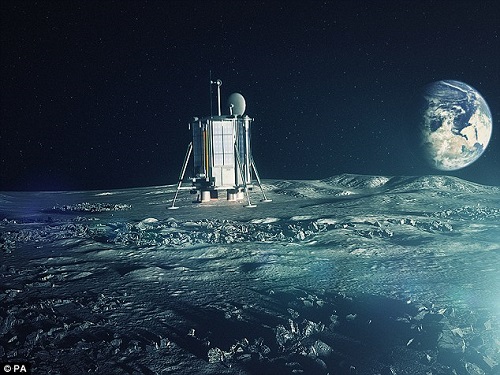 Going Deep at the Pole

To explain that, let me discuss the larger plan: The Lunar Mission One probe will land at the lunar south pole. Aboard it will be a 2-meter drill connected by cable to the spacecraft, with which controllers will remotely drill a 5-centimeter borehole. The plan here is to retrieve cylindrical rock cores for analysis by instrumentation aboard the craft, and the drilling time is envisioned as lengthy — three to four months — until a target depth of 20 meters has been achieved, although the planners speculate that the drill might reach depths up to 100 meters.

This sets up some interesting science, for even the nominal 20 meter goal takes us into unexplored terrain — I believe the deepest we’ve reached from any spacecraft on the Moon is no more than a couple of meters. Enormously useful geological measurements could result and may help us better understand elements of the early Solar System’s history, including the late heavy bombardment period. Moreover, Lunar Mission One should be able to study the surrounding surface at the pole, analyzing any local materials that might aid a future human base.

But it’s what happens when the drilling is done that particularly interests me. When I spoke of ‘deep time,’ I was referring to the plan to use the borehole — after the science goals have been achieved — to lower a publicly assembled archive of life on Earth, the history of our species and a database stuffed with information about our biosphere, deep below the lunar surface. The substantial protection provided by tens of meters of lunar regolith should make this an unusually long-lasting capsule, one the planners believe can remain intact for perhaps a billion years.

Lunar Mission One also has a private archive, what it describes as millions of individual ‘memory boxes’ to which contributors to the project will be able to upload data. Longer-term funding for the mission, it is hoped, will grow out of what will become a ten-year opportunity to sell these memory boxes, which could contain photos, video, audio or any other digital information. The plan is to store tens of terabytes of such material within the private archive, with larger contributions to the project allowing the donor to buy larger amounts of storage.

To boost donations, individual memory boxes might do the trick, but my interest is in the development of the public archive, which forces decisions about how we view ourselves, what our priorities are, and what we choose to be preserved for an unknowable future generation to find. The assembly of that kind of content is a fascinating process, one that Centauri Dreams regular Heath Rezabek has devoted himself to developing through his Vessels project, which you can read about in posts like Deep Time: The Nature of Existential Risk.

The term ‘deep time’ invokes Gregory Benford’s 1999 book of that name (Deep Time: How Humanity Communicates Across Millennia), which in turn harkens back to a 1992 paper in which Benford discussed a program of freezing and preserving species in threatened ecospheres as a response to the loss of biodiversity in our era. What can we do, Benford asked, to create such a ‘Library of Life,’ and how should we assemble the samples? All this is discussed in the later book within the context of how humans communicate with each other across historical eras, questions raised by the great monuments of history, and by engineering projects like storage sites for radioactive materials that must long outlive their makers.

Lunar Mission One is exploring this terrain with its announced purpose of creating an archive that, if I read its Kickstarter page correctly, will be assembled using its core crowdsourcing methods. In my judgement, assembling a representation of our species is a highly productive exercise. Think of the Voyager Golden Record, or the ongoing private attempt to craft an archive that will be uploaded to New Horizons after its outer system mission is complete, if NASA signs off on the plan. We question our basic priorities when we look long-term, gaining perspective on the values that count, and perhaps learning where our strongest efforts need to be re-focused.

Long-haul archives, in other words, are not only about the future, but about our ability to make course corrections as we back off to view ourselves in the context of history and of nature.

So good luck to Lunar Mission One. We need projects that look at these matters. We need not only single ‘time capsule’ archives but a host of archival sites that are designed, like the Long Now Foundation’s 10,000 Year Clock, to last into a deep future against which our own lifetimes are acted out on the smallest of scales. If selling personal memory boxes is what it takes to get a serious public archive buried deep within the Moon, then let’s hope this one of many possible archives can be completed as planned, a gesture to the future from its myriad creators.

Next post: Tightening the Focus on Near Earth Asteroids