Looking forward from winter into spring in North America — unfortunately still a few months out — I can thank Earth’s obliquity for a seasonal change I enjoy more every year. Obliquity is the angle that our planet’s rotational axis makes as it intersects the orbital plane, which in the case of Earth is 23.5°, so that when we reach the summer solstice, the north pole of the planet tilts toward the Sun by this angle. At winter solstice, the pole is tilted away by the same amount.

Our Solar System’s most extreme case of obliquity is Uranus, where the angle is a whopping 97.8°. Imagine a planet where the north pole points all but directly at the Sun, cycling through a year where the southern pole will eventually do the same. I’m reminded of Stephen Baxter’s novel Ark (Roc, 2011). Here, interstellar travelers come to a planet they hopefully designate Earth II (82 Eridani is its primary). Alas, the obliquity turns out to be 90 degrees, kicking off extreme seasonality. In this passage, one of the characters explains the problem to the rest of the crew:

“Every part of the planet except an equatorial strip will suffer months of perpetual darkness, months of perpetual light. Away from the equator you’ll suffer extreme heat, aridity, followed by months of Arctic cold—we estimate the surface temperature will drop to a hundred degrees below across much of the space-facing hemisphere, and there’ll be one hell of a blanket of snow and ice. Even the equator would be a challenge to inhabit, for even at the height of summer in either hemisphere the sun would be low, the heat budget minimal, the climate wintry.”

Is a planet with 90 degree obliquity in any sense habitable? It’s a question the crew debate and I won’t spoil what they find out. But I will point to a new study out of MIT that looks at planetary obliquity and finds that, depending on the world, habitable conditions may emerge. The work of David Ferreira (University of Reading, UK), Sara Seager (MIT) and colleagues, the paper in Icarus uses a three-dimensional computer model to simulate interactions between atmosphere, ocean and sea ice over a 3000-meter deep ocean. Shallower, more simplified oceans at 200, 50 and 10 meters in depth were also plugged into the mix for comparison.

The model assumes an Earth-sized planet at a similar distance from its star, one that is completely covered in water. Simulating three planetary obliquities — 23 degrees, 54 degrees and 90 degrees — the researchers found that a global ocean as shallow as 50 meters would absorb so much solar energy throughout the polar summer, releasing it back into the atmosphere during the winter, that the climate would remain relatively mild, with temperatures comfortably spring-like year round. It’s a result that no one on the team had anticipated.

“We were expecting that if you put an ocean on the planet, it might be a bit more habitable, but not to this point,” Ferreira says. “It’s really surprising that the temperatures at the poles are still habitable.” 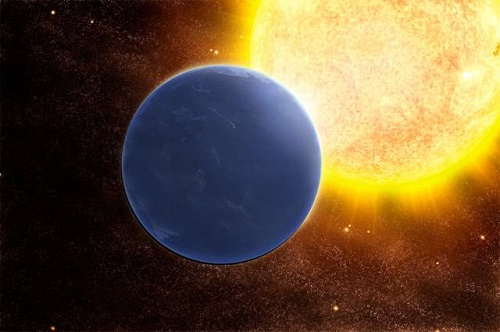 Image: A water world at Earth’s distance from the Sun, assuming a deep enough ocean, could maintain habitable temperatures year-round even if its obliquity is high. Credit: Christine Daniloff/MIT.

It’s also a fragile situation, to judge from these results. A ten-meter deep global ocean would not be deep enough. The world would experience a runaway effect in which the first ice that formed would spread quickly onto the dark side. The eventual emergence of the dark side into light would not help, for by this point, the massive ice sheets that had formed would reflect sunlight efficiently enough to allow the ice to continue to spread, until the world became completely encased in ice. With this kind of high obliquity world in an Earth-like orbit — Ferreira and Seager call it an ‘aquaplanet’ — you’re either facing a warm ocean and benign temperatures or a global snowball.

But the potential is there for an all-water planet at high obliquity, one with a sufficiently deep ocean, to offer conditions in which life might develop. Adds Ferreira:

“The expectation was that such a planet would not be habitable: It would basically boil, and freeze, which would be really tough for life. We found that the ocean stores heat during summer and gives it back in winter, so the climate is still pretty mild, even in the heart of the cold polar night. So in the search for habitable exoplanets, we’re saying, don’t discount high-obliquity ones as unsuitable for life.”

Next post: Interstellar: Herald to the Stars or a Siren’s Song?