Are Europa’s Plumes Really There?

A new study of data from the Cassini Saturn orbiter has turned up useful information about, of all places, Europa. Cassini’s 2001 flyby of Jupiter en route to Saturn produced the Europa data that were recently analyzed by members of the probe’s ultraviolet imaging spectrograph (UVIS) team. We learn something striking: Most of the plasma around Europa is not coming from internal activity being vented through geysers, but from volcanoes on Jupiter’s moon Io. Europa actually contributes 40 times less oxygen to its surrounding environment than previously thought.

These findings cast one Europa mission possibility in a new light. In 2013, researchers using the Hubble Space Telescope reported signs of plume activity, which immediately called the example of Enceladus to mind. If Europa were venting materials from an internal ocean, a possible mission scenario would be to fly a probe through the plume, just as the Cassini team has done with its probe at Enceladus. The latter also has strong signs of an internal ocean, but its geysers are far more substantial than what Hubble has observed at Europa. The new Cassini data indicate that at least in 2001, the UVIS instrument could detect no plume activity on Europa. 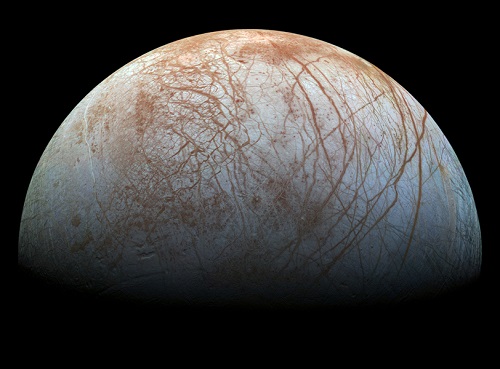 Image: Europa is a high value target in any case, but plumes would offer useful options for future spacecraft to study. Credit: NASA/JPL-Caltech/SETI Institute.

In the mix here is the kind of plasma observed in Europa’s orbit. The UVIS instrument saw hot plasma there, a stark contrast to the cold, dense gas that marks out the orbit of Enceladus. The Enceladan plumes account for this gas, which slows down electrons being dragged through it by Saturn’s magnetic field, lowering the temperature of the plasma. If something similar is happening at Europa, there is little sign of it. Cassini could find no evidence that large amounts of water vapor were being injected into Europa’s orbit, so any Europan plume activity is minimal. Amanda Hendrix (Planetary Science Institute) is a Cassini UVIS team member who co-authored the new study:

“It is certainly still possible that plume activity occurs, but that it is infrequent or the plumes are smaller than we see at Enceladus. If eruptive activity was occurring at the time of Cassini’s flyby, it was at a level too low to be detectable by UVIS.”

Even the tenuous atmosphere around Europa, millions of times thinner than Earth’s atmosphere, turns out to be about 100 times less dense than previously believed, according to these results. So the Hubble findings point to the need for further study, to determine whether there is intermittent plume activity or not. Maybe what had been thought to be 200-kilometer high jets of water are an extreme rarity, or perhaps they were the result of a mistaken original analysis.

This story isn’t over, because New Scientist is reporting that scientists who discovered the original Europa plume are working on an rebuttal of the Cassini findings. The magazine quotes Kurt Retherford (Southwest Research Institute), one of the plume discoverers, as saying that Cassini was simply too far from Jupiter to get an adequate reading of Europa’s plume activity, adding “We would say using their technique, they couldn’t possibly find water.”

A future mission may be what it takes to make sense of observations that were at the outside of Hubble’s envelope and may not be repeated until we can get a closer look. If Europa isn’t venting water into space, its status as a highly interesting astrobiology target is hardly compromised, but a flyby through a plume will disappear from our list of mission possibilities. Can Hubble make a repeat, definitive observation to settle this?

The Cassini findings were presented on December 18 at the American Geophysical Union fall meeting in San Francisco. The paper is Shemansky et al., “A New Understanding of the Europa Atmosphere and Limits on Geophysical Activity,” Astrophysical Journal Vol. 797, No. 2 (2014), p. 80 ff. (abstract).

Previous post: Interstellar: Herald to the Stars or a Siren’s Song?