As we start thinking ahead to the TESS mission (Transiting Exoplanet Survey Satellite), currently scheduled for launch in 2017, the exoplanet focus sharpens on stars closer to home. The Kepler mission was designed to look at a whole field of stars, 156,000 of them extending over portions of the constellations Cygnus, Lyra and Draco. Most of the Kepler stars are from 600 to 3000 light years away. In fact, fewer than one percent of these stars are closer than 600 light years, while stars beyond 3000 light years are too faint for effective transit signatures.

Kepler has proven enormously useful in helping us develop statistical models on how common planets are, with the ultimate goal, still quite a way off, of calculating the value of ηEarth (Eta_Earth) — the fraction of stars orbited by planets like our own. Looking closer to home will be the mandate of TESS, which will be performing an all-sky survey rather than the ‘long stare’ Kepler has used so effectively. We should wind up with a growing catalog of nearby main-sequence stars hosting planets, a catalog that future missions will exploit.

But what of Kepler itself? It’s heartening to see a mission rescued when onboard problems have threatened its survival, and in the case of this doughty space telescope, the revival is almost as interesting as the latest results. The Kepler primary mission ended with the failure of the second of four reaction wheels that were used to stabilize the spacecraft. Kepler needed three reaction wheels for effective pointing accuracy, but ground controllers found a way to use the pressure of sunlight as a kind of ‘virtual’ reaction wheel to control the instrument.

Thus we get K2, the extended Kepler mission. Software to correct for drift in the field of view allows the telescope to achieve about half the photometric precision of the original Kepler mission, according to this University of Hawaii news release. A new exoplanet find — HIP 116454 b — demonstrates that the method works and that Kepler is, at least to some extent, back in business. Unlike most of the stars in the original Kepler field of view, HIP 116454 is relatively nearby, at 180 light years from Earth in the constellation Pisces. 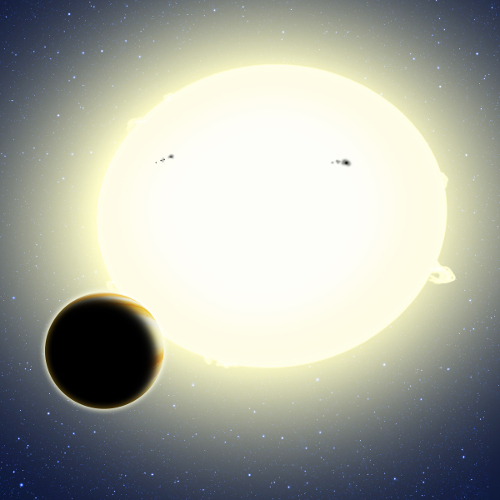 Image: This artist’s conception portrays the first planet discovered by the Kepler spacecraft during its K2 mission. A transit of the planet was teased out of K2’s noisier data using ingenious computer algorithms developed by a researcher at the Harvard-Smithsonian Center for Astrophysics (CfA). The newfound planet, HIP 116454 b, has a diameter of 32,000 kilometers. It orbits its star once every 9.1 days. Credit: CfA.

Working with K2 is exceedingly tricky business, with NASA likening the use of solar photons to stabilize the instrument to the act of balancing a pencil on a finger, a manageable but demanding task. Nor was HIP 116454 b an easy catch. For one thing, only a single transit was detected in the engineering data that was being used to prepare the spacecraft for the full K2 mission. That called for confirmation from ground-based observatories, which came from the Robo-AO instrument mounted on the Palomar 1.5-meter telescope and additional follow-up from the Keck II adaptive optics system on Mauna Kea.

We learn that HIP 116454 b is about two and a half times the size of Earth, with a diameter of about 32000 kilometers and a mass twelve times that of our planet. The paper on this work speculates that we are either dealing with a water world or a mini-Neptune with a gaseous envelope. The planet’s orbital period around the K-class host is 9.1 days at a distance of 13.5 million kilometers. As a ‘super-Earth,’ it will be a high-value target for future observation:

HIP 116454 b could be important in the era of the James Webb Space Telescope (JWST) to probe the transition between ice giants and rocky planets. In the Solar system, there are no planets with radii between 1–3 R⊕ while population studies with Kepler data have shown these planets to be nearly ubiquitous… Atmospheric studies with transit transmission spectroscopy can help determine whether these planets are in fact solid or have a gaseous envelope, and give a better understanding on how these planets form and why they are so common in the Galaxy.

The planet will also be useful in relation to another similar world:

Also of interest is the fact that HIP 116454 b is very similar to HD 97658 b, in terms of its orbital characteristics (both are in ∼ 10 day low-eccentricity orbits), mass and radius (within 10% in radius, and within 25% in mass), and stellar hosts (both orbit K–dwarfs). Comparative studies of these two super–Earths will be valuable for understanding the diversity and possible origins of close–in Super–Earths around Sun–like stars.

We know from this work that K2 can find transiting planets despite the loss of precision the telescope has suffered, and the paper points out that the engineering test field in which HIP 116454 b was found as well as other potential fields of view will enable observatories in both hemispheres to view the stars for follow-up, something that was not possible in the original Kepler mission. So with K2 capability, we can see HIP 116454 b, relatively nearby, as a kind of bridge between the original Kepler statistical studies and the nearby targets of the TESS mission to follow.