One way to confirm the existence of a transiting planet is to run a radial velocity check to see if it shows up there as a gravitationally induced ‘wobble’ in the host star. But in many cases, the parent stars are too far away to allow accurate measurements of the planet’s mass. What Guillermo Torres (Harvard-Smithsonian Center for Astrophysics) did in the case of eight new candidates possibly in their stars’ habitable zones was to use BLENDER, a software program he and Francois Fressin developed that runs at NASA Ames on the Pleiades supercomputer.

A BLENDER analysis can determine whether candidates are statistically likely to be planets. Torres and Fressin have applied it before in the case of small worlds like Kepler 20e and Kepler 20f, important finds because both were exoplanets near the size of the Earth. Using the software allowed the researchers to create a range of false-positive scenarios to see which could reproduce the observed signal. A nearby binary star system, for example, could cause a dimming of the star’s light that might be mistaken for a planet. The Pleiades supercomputer allowed the team to work through almost a billion different scenarios, which in the case of Kepler 20e showed that it was 3,400 times more likely to be a planet than a false positive.

Applying the same techniques to the eight new planet candidates, Torres and team went on to spend a year doing follow-up work in adaptive optics imaging, high-resolution spectroscopy and speckle interferometry to characterize the new systems. We learn from all this that all eight of these worlds meet the team’s standards for verifiability. All orbit at a distance where liquid water could occur on their surfaces, while two are, as researchers told a meeting of the American Astronomical Society today, more similar to Earth than any exoplanets we’ve yet found.

The similarity in question refers to the size and composition of the two planets rather than other broad characteristics like the star they orbit. Unlike our G-class star, the primary star for Kepler-438b is a red dwarf, while Kepler-442b orbits a K-class star. Kepler-438b receives about 40 percent more light than Earth (Venus receives twice the solar flux of Earth), while Kepler 442b gets about two-thirds the light of Earth. The team gives the latter a 97 percent chance of being in the habitable zone, while the former’s chances are calculated at 70 percent. 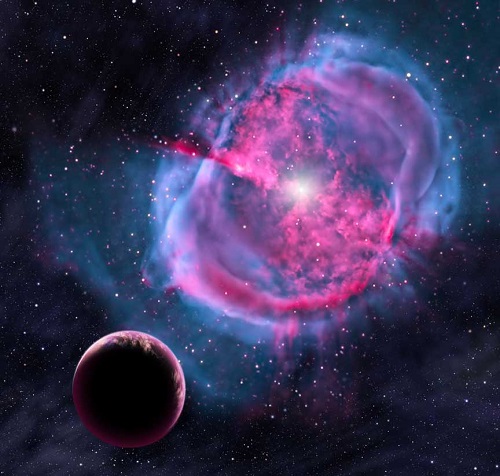 Image: This artist’s conception depicts an Earth-like planet orbiting an evolved star that has formed a stunning “planetary nebula.” Earlier in its life, this planet may have been like one of the eight newly discovered worlds orbiting in the habitable zones of their stars. Credit: David A. Aguilar (CfA).

Kepler-438b, 470 light years from Earth, is in a 35-day orbit, while Kepler 442b (1100 light years away) completes an orbit around its star every 112 days. Four of the eight newly found planets are in multiple-star systems, although in each case, according to this CfA news release, the companion stars are far enough away not to exert a significant influence on the observed planets.

A key question is whether these really are rocky worlds — without a measurement of planetary mass, their composition is unknown. Torres and colleagues think that Kepler-438b, with a diameter about 12 percent larger than Earth, has a 70 percent chance of being rocky. Kepler 442b is about a third larger than Earth, but by the team’s reckoning has a 60 percent chance of being rocky. So these are intriguing possibilities, but it has to be said that habitability remains no more than an inference. “We don’t know for sure whether any of the planets in our sample are truly habitable,” says second author David Kipping (CfA). “All we can say is that they’re promising candidates.”