The eight ‘habitable zone’ planets we discussed yesterday appear today in a much broader context. The Kepler mission has verified its 1000th planet, and with the detection of 554 more planet candidates, the total candidate count has now reached 4175. According to this NASA news release, six of the new planet candidates are near-Earth size and orbit in the habitable zone of stars similar to the Sun. These all require follow-up observation to confirm their status as planets, but with confirmed planets like Kepler-438b and Kepler-442b, along with these further candidates in the habitable zone, the numbers keep inching us closer to an Earth 2.0.

“Kepler collected data for four years — long enough that we can now tease out the Earth-size candidates in one Earth-year orbits,” says Fergal Mullally, a SETI Institute Kepler scientist at Ames who led the analysis of a new candidate catalog. “We’re closer than we’ve ever been to finding Earth twins around other sun-like stars. These are the planets we’re looking for.”

The next catalog release of the Kepler data set is now in the works, an analysis that will include the final month of mission data put through a new and more sensitive software iteration, one that should be able to tease out still further signatures of Earth-size planets. 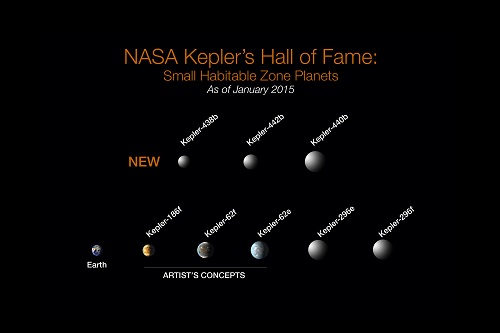 Image: NASA Kepler’s Hall of Fame: Of the more than 1,000 verified planets found by NASA’s Kepler Space Telescope, eight are less than twice Earth-size and in their stars’ habitable zone. All eight orbit stars cooler and smaller than our Sun. The search continues for Earth-size habitable zone worlds around Sun-like stars. Credit: NASA/Kepler team.

The paper on the recently validated ‘habzone’ planets has now reached arXiv, where you can find the preprint of Torres et al., “Validation of Twelve Small Kepler Transiting Planets in the Habitable Zone.” I want to pull a paragraph out of this paper with regard to the BLENDER analysis I referred to yesterday. BLENDER is a powerful tool using software analysis of false-positive scenarios that is particularly useful when planets are so far away that radial velocity confirmation is difficult. A planetary transit can be mimicked by other phenomena, such as background or foreground eclipsing binary stars, whose light can create a ‘blend’ of signals that has to be untangled. The paper describes how BLENDER can rule false positives out:

BLENDER makes full use of the detailed shape of the transits to limit the pool of viable blends. It does this by simulating large numbers of blend scenarios and comparing each of them with the Kepler photometry in a χ2 sense. Fits that give the wrong shape for the transit are considered to be ruled out. This enables us to place useful constraints on the properties of the objects that make up the blend, including their sizes and masses, overall color and brightness, the linear distance between the background/foreground eclipsing pair and the target, and even the eccentricities of the orbits. Those constraints are then used to estimate the frequencies of blends of different kinds. 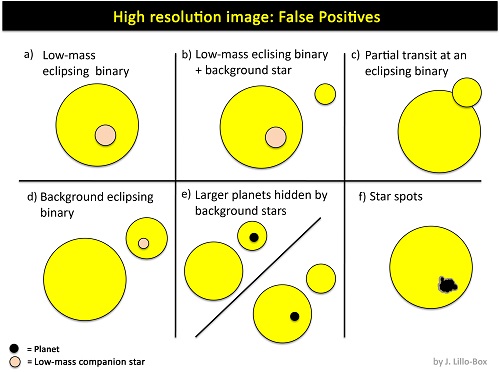 BLENDER’s simulated lightcurves, along with other tools like high-resolution spectroscopy, allow tricky catches like Kepler-438b and Kepler-442b to be validated. The process is exhaustive and highlights just how far we’re progressing in our ability to find these small worlds. The paper presents the current state of the art in action, a fascinating and encouraging account that has been accepted for publication in The Astrophysical Journal.

Also apropos of this week of planetary announcements keyed to the American Astronomical Society meeting in Seattle is work that Courtney Dressing (Harvard-Smithsonian Center for Astrophysics) presented on Monday. Using the HARPS-North instrument on the 3.6-meter Telescopio Nazionale Galileo in the Canary Islands, Dressing and Harvard astronomer David Charbonneau have been examining the ten known exoplanets with diameter less than 2.7 times that of Earth that have accurately measured masses. The result: The five planets with diameters smaller than 1.6 that of Earth showed a tight relationship between mass and size.

“To find a truly Earth-like world,” says Dressing, “we should focus on planets less than 1.6 times the size of Earth, because those are the rocky worlds.”

In this study, larger and more massive exoplanets showed significantly lower densities, an indication that they include a large amount of water or other volatiles like hydrogen or helium. This CfA news release notes that Dressing and Charbonneau do not believe that all planets less than six times the mass of Earth are necessarily rocky — planets like those in the Kepler-11 system show both low mass and low density. But the assumption here is that the average low-mass planet orbiting near its star has a high chance of having a rocky composition like the Earth.

The paper on this work, which has been accepted for publication at The Astrophysical Journal, isn’t yet up on arXiv, but I’ll publish the reference when it becomes available. Meanwhile, the paper by Laura Schaefer and Dimitar Sasselov on ‘super-Earth’ oceans, examined here on Monday, has now appeared. It’s “The persistence of oceans on Earth-like planets: insights from the deep-water cycle,” likewise accepted for publication at The Astrophysical Journal (preprint).