Working at near-infrared wavelengths, the Gemini Planet Imager, now entering regular operations at the Gemini South Telescope in Cerro Pachon (Chile), is producing striking work, including images of exoplanets and circumstellar disks. Have a look at the image below, which highlights the instrument’s ability to achieve high contrast at small angular separations. Such capabilities make it possible to image exoplanets around nearby stars, as seen here in the case of the star HR 8799. 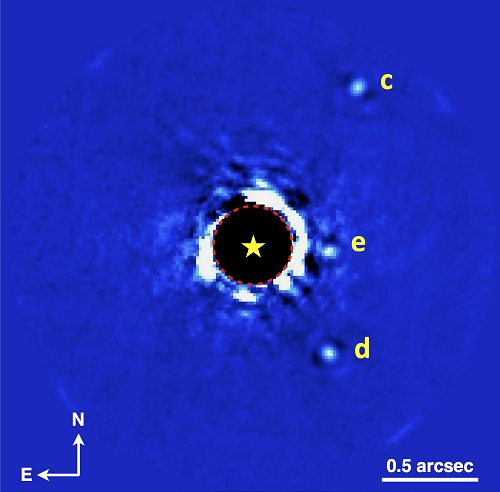 Image: GPI imaging of the planetary system HR 8799 in K band, showing 3 of the 4 planets. (Planet b is outside the field of view shown here, off to the left.) These data were obtained on November 17, 2013 during the first week of operation of GPI and in relatively challenging weather conditions, but with GPI’s advanced adaptive optics system and coronagraph the planets can still be clearly seen and their spectra measured. Credit: Christian Marois (NRC Canada), Patrick Ingraham (Stanford University) and the GPI Team.

This work, presented at the American Astronomical Society meeting in Seattle, is especially promising given that the Gemini Planet Imager (GPI) has until recently been in its commissioning phase, observing a wide range of targets as the instrument was integrated into the Gemini Observatory software. Patrick Ingraham (Stanford University), lead author of the upcoming paper on HR 8799, notes that even these early observations were productive, revealing spectra for two of the planets that differed markedly from what had been expected given their similar colors.

“Current atmospheric models of exoplanets cannot fully explain the subtle differences in color that GPI has revealed,” Ingraham added..”We infer that it may be differences in the coverage of the clouds or their composition. The fact that GPI was able to extract new knowledge from these planets on the first commissioning run in such a short amount of time, and in conditions that it was not even designed to work, is a real testament to how revolutionary GPI will be to the field of exoplanets.” 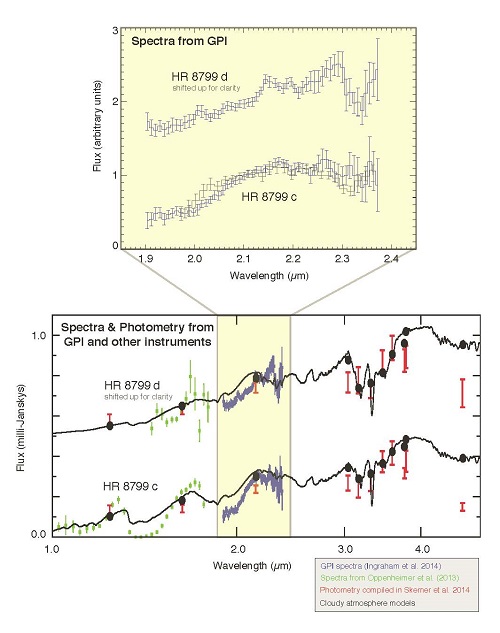 Also revealed at AAS 225 was imagery from the dusty disk around the young star HR 4796A, seen below. Here the striking feature is the instrument’s ability to analyze the polarized light of the disk, which reveals that it must be partially opaque. That would suggest a disk composition much denser than the dust found in the outer regions of our own Solar System. The HR 4796A dust ring is about twice the diameter of the planetary orbits in our system, while its star is twice the mass of the Sun. 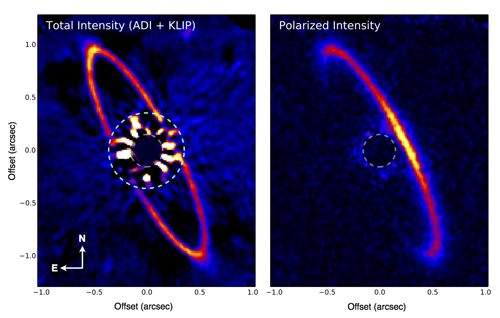 Image: GPI imaging polarimetry of the circumstellar disk around HR 4796A, a ring of dust and planetesimals similar in some ways to a scaled up version of the solar system’s Kuiper Belt. These GPI observations reveal a complex pattern of variations in brightness and polarization around the HR 4796A disk. The western side (tilted closer to the Earth) appears brighter in polarized light, while in total intensity the eastern side appears slightly brighter, particularly just to the east of the widest apparent separation points of the disk. Reconciling this complex and apparently-contradictory pattern of brighter and darker regions required a major overhaul of our understanding of this circumstellar disk. Credit: Marshall Perrin (Space Telescope Science Institute), Gaspard Duchene (UC Berkeley), Max Millar-Blanchaer (University of Toronto), and the GPI Team.

The illustration below explains the team’s current thinking on the HR 4796A disk. 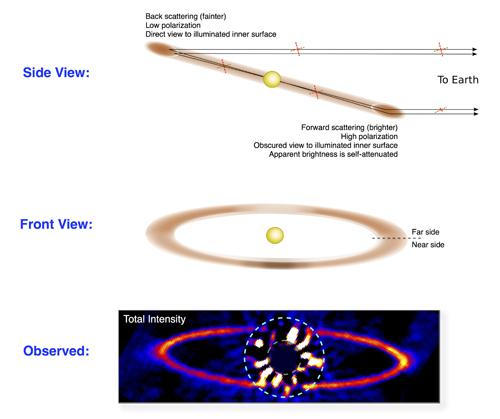 Image: Diagram depicting the GPI team’s revised model for the orientation and composition of the HR 4796A ring. To explain the observed polarization levels, the disk must consist of relatively large (> 5 µm) silicate dust particles, which scatter light most strongly and polarize it more for forward scattering. To explain the relative faintness of the east side in total intensity, the disk must be dense enough to be slightly opaque, comparable to Saturn’s optically thick rings, such that on the near side of the disk our view of its brightly illuminated inner portion is partially obscured. This revised model requires the disk to be much narrower and flatter than expected, and poses a new challenge for theories of disk dynamics to explain. GPI’s high contrast imaging and polarimetry capabilities together were essential for this new synthesis. Credit: Marshall Perrin (Space Telescope Science Institute).

The Gemini Planet Imager is now open to proposals for early observations in 2015. The core science program for the instrument is to be the Gemini Planet Imager Exoplanet Survey (GPIES), which will look at 600 young and relatively nearby stars over the next several years. The planets of such stars will offer the best targets for the GPI’s infrared wavelength operations. All told, the GPIES intends to make 890 hours of observations over the next three years. This Gemini Observatory news release offers additional background.

Be aware that Marshall Perrin (Space Telescope Science Institute), who is one of the team leaders on the Gemini Planet Imager (and the scientist who presented these results at the AAS meeting), used to write a highly readable astronomy column for the online science fiction magazine Strange Horizons. It’s been a bit over five years since his last, and I for one would love to see the column resumed. Consider this a gentle nudge in that direction.