About a year ago we looked at a young star called HD 142527 in the constellation Lupus (see HD 142527: An Unusual Circumstellar Disk). A T Tauri star about five million years old, HD 142527 has drawn attention because it shows evidence of both an inner and an outer disk, each of which may be capable of producing planets. These are disks with a twist, as astronomers at the Millennium ALMA Disk Nucleus project at the Universidad de Chile demonstrate in a new paper that explains the three-dimensional geometry of this unusual system.

HD 142527’s two disks are striking because no other star shows a gap this large between an inner and outer disk, a gap that spans a region from 10 AU out to 120 AU. Two dark regions stand out in observations of the outer disk that break its continuity. The new study reveals these outer disk features to be caused by the shadow of the inner disk. The shape and orientation of the shadows thus become a measure of the inner disk’s orientation. Using radiative transfer methods that analyze the absorption, emission and scattering of light, the researchers find that the inner disk has to be tilted by about 70 degrees to produce the known features. 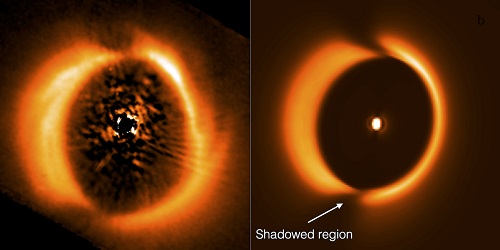 Image: Comparison between the the observed infrared image of HD142527 (left) and the result of the warped inner disk model (right) as predicted by radiative transfer calculations. Shadows correspond to the two dark regions or intensity nulls seen in the upper and bottom sections of the outer disk. Credit: Henning Avenhaus/Millenium ALMA Disk Nucleus.

We’re left with the puzzle of how this system came to be in this unusual configuration. One possibility, suggested in 2014, is a relatively recent close encounter with another star, although lead author Sebastian Marino argues in the paper that no candidate has yet been identified. Interactions between the circumstellar disks and possible proto-planets are more likely, and we have an example in the debris disk around Beta Pictoris where an inner disk was apparently influenced by a young planet whose orbit is aligned with an inclined warped disk component.

But that answer raises questions as well, notes Sebastian Perez, a co-author of the paper:

“The astounding fact is that this planet would most likely need to be in a highly inclined orbit, just like the inner parts of the disk. Which poses more interesting questions about the dynamical stability of such arrangement.”

It’s interesting to speculate on how shadowing like this might affect planet formation, given that the shadows create regions colder and denser than the rest of the outer disk. And can we generalize from the HD 142527 disks? This finding, notes the paper, “… poses a challenge to understand the dynamics of the HD 142527 system, and is an invitation to interpret scattered light images of gapped protoplanetary disks from the perspective of inner warp shadows.”

The paper is Marino et al., “Shadows cast by a warp in the HD 142527 protoplanetary disk,” Astrophysical Journal Letters Vol. 798, No. 2, L44 (abstract / preprint). A news release from the Millenium ALMA Disk Nucleus project is available.