Planets to Be Discovered in the Outer System?

Having just looked at the unusual ‘warped’ disk of HD 142527, I’m inclined to be skeptical when people make too many assumptions about where planets can form. Is our Solar System solely a matter of eight planets and a Kuiper Belt full of debris, with a vast cometary cloud encircling the whole? Or might there be other small planets well beyond the orbit of Neptune, planets much larger than dwarfs like Pluto but not so large that we have been able to detect them?

Certainly Carlos de la Fuente Marcos and Raúl de la Fuente Marcos (Complutense University of Madrid), working with Sverre J. Aarseth (University of Cambridge) think evidence exists for this proposition. The scientists are interested in how large objects can affect the trajectories of small ones, and in particular what a comet named 96P/Machholz 1 can reveal about how such interactions work. They’re focused on the Kozai mechanism, which explains how the larger object causes a quantified libration in the smaller object’s orbit, and use the Jupiter-family comet as a reference to understand the processes that may be happening in the outer Solar System.

Objects like Sedna are in extreme orbits that extend out hundreds of AU, with even their closest approach to the Sun well beyond the orbit of Pluto. And the the orbits of Sedna itself and others among the group the authors call ‘extreme trans-Neptunian objects’ (ETNOs) show enough discrepancies from what we would expect to point to the existence of larger objects affecting their orbits, just as Jupiter affects Comet 96P/Machholz 1. Carlos de la Fuente Marcos explains:

“This excess of objects with unexpected orbital parameters makes us believe that some invisible forces are altering the distribution of the orbital elements of the ETNO and we consider that the most probable explanation is that other unknown planets exist beyond Neptune and Pluto. The exact number is uncertain, given that the data that we have is limited, but our calculations suggest that there are at least two planets, and probably more, within the confines of our solar system.”

We’ve recently discovered 2012 VP113, evidently another object orbiting far beyond Pluto, whose own orbit has been suggested as evidence for an undiscovered super-Earth with up to ten times the mass of our planet orbiting in a region perhaps 250 AU from the Sun. The work on 2012 VP113 by Chadwick Trujillo and Scott Sheppard is invoked by the new research, which argues that dwarf worlds like Sedna and other ETNOs may signal the existence of a large population of similar small ETNOs. Moreover, the gravitational perturbations of the outer system evident in their orbits point to something larger, as one of the two papers on the work notes:

…the architecture of that region is unlikely to be the result of a gravitationally unperturbed environment. If there are two planets, one at nearly 200 au and another one at approximately 250 au, their combined resonances may clear the area of objects in a fashion similar to what is observed between the orbits of Jupiter and Saturn. 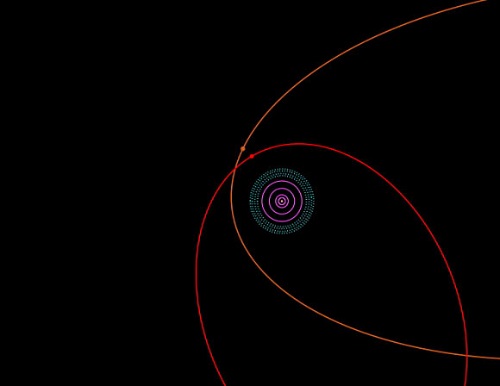 Image: This is an orbit diagram for the outer Solar System. The Sun and Terrestrial planets are at the center. The orbits of the four giant planets, Jupiter, Saturn, Uranus and Neptune, are shown by purple solid circles. The Kuiper Belt, including Pluto, is shown by the dotted light blue region just beyond the giant planets. Sedna’s orbit is shown in orange while 2012 VP113′s orbit is shown in red. Both objects are currently near their closest approach to the Sun. Credit: Scott Sheppard.

So while we have no evidence for planets the size of Jupiter or Saturn moving in circular orbits in the outer system, the possibility of small planets beyond Neptune may still be in play, even if a wave of recent interest has resulted in no detections. The current authors think their results are unlikely to be the result of perturbations caused by Neptune or of observational bias, even while stressing that their work is based on the behavior of a relatively small number of objects. Can a moderate-sized planet affect objects beyond Pluto’s orbit in ways that New Horizons could detect? The authors think it’s possible, and it’s an interesting thought, particularly now that New Horizons is actually entering the first of its encounter phases for the Pluto/Charon flyby.