Making the Case for Deep Space

I get few questions that are harder to answer than ‘what happened to the sense of adventure that we once had with Apollo?’ And there are few questions I get more often, usually accompanied by ‘how are we going to do starflight if we don’t even have the will to go back to the Moon?’ Both questions have unsettling answers, but the second question is open-ended. We can hope that the ‘sense of sag’ that Michael Michaud describes in talking about the post-Apollo period (for manned flight, at least) may itself evolve into something else, something far more hopeful.

But let’s dwell a moment on the first question. I’ve been looking over an essay Michaud wrote for Spaceflight in the mid-1970s, a decade of the Pioneers and the Voyagers, but also a decade when it became clear that our presence on the Moon with Apollo was going to be a short-lived affair. Instead, we were talking about Skylab, about docking operations between Soviet and American spacecraft, and the next big ticket item on the manned spaceflight agenda looked to be a reusable space shuttle. NASA wanted to deliver measurable returns, even when many of us were thinking ‘Wait! Weren’t we supposed to be headed on to Mars by now?’.

There were plenty of reasons for what some considered to be a more realistic assessment of Earth’s needs. The critics of Apollo argued that it was played as a card in the great geopolitical game of the Cold War, set up as a contest between two super-powers so that achieving the Moon meant the ‘race’ was over. We were dealing with enormous demands on spending, and space projects that could produce quantifiable results were the currency of the day. Instead of manned missions to the Moon, the goal was scientific observation of the Earth to improve our understanding of our ecosystem, to upgrade communications, to streamline navigation.

Nearby Space in Context

To our credit, the exploratory impulse remained, as the Pioneer and Voyager triumphs attest. But are we as a species destined to stay on the Earth or just above it in close orbit, letting our machines be our surrogates in deep space? A prolific essayist and author (Contact with Alien Civilizations (Copernicus, 2007),. Michaud is a former diplomat with global experience in US science policy. He argues here that such a limited view of manned spaceflight goes against the impulse that has long driven us toward expansion. Remember, this perspective is from the 1970s — our ‘sense of sag’ has been with us a long time:

Historically, spaceflight has had a philosophical purpose: to carry man to the stars. From early pioneers such as the Russian Tsiolkovsky and the American Goddard to contemporary writers such as Arthur C. Clarke, there was a consistent line of thinking: build the machines that will allow man to escape the confines of Earth and explore the Universe, and expand the realm of the human race. But military exploitation of the rocket and Cold War competition in space diverted our thinking, and Project Apollo ultimately left us unsatisfied because it had a short-term goal and did not lead directly to anything else. While Apollo proved that man could reach another sphere, it did not leave a step to be built upon. 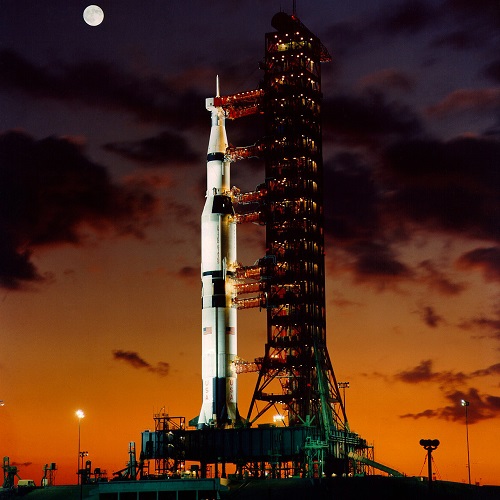 Image: Saturn V at twilight and, at upper left, its target. Credit: NASA.

I agree completely with Michaud that a major problem with Apollo was the fact that it was in every sense a crash program. The US found itself, post-Sputnik, trying to catch up to a rapidly moving Soviet program that was setting new records in space almost monthly. In fact, looking back at how we pushed the envelope with missions like Apollo 8, I’m astounded that we didn’t lose more than one Apollo crew (and at that, the one we did lose died in a training accident). We put a crew on a never-before attempted journey outside Earth orbit to the Moon and back, launching Apollo 8 with a rocket that had never been used for a manned mission (Apollo 7 flew a less powerful variant of the Saturn rocket). It seemed dicey at the time, but from the perspective of half a century later, it seems like utter folly. The results were, of course, magnificent.

But while we still play Apollo 8’s Christmas Eve transmission from lunar orbit on YouTube and elsewhere, we’re trying to work out the next bold steps for the manned space program in a very tentative way. If Mars is truly our objective, it’s an objective that’s only vaguely in our plans for the 2030s, the kind of goal that all too easily recedes a decade at a time. NASA may or may not complete the Space Launch System, but are we sure what we will do with it? Elon Musk wants to die on Mars — does SpaceX and Falcon Heavy awaken any sort of Apollo-like passion?

For some of us, the old passion never died, but when it comes to the general public, we’re dealing with a case that has to be made all over again. If we take an evolutionary perspective, the purpose of human life, argues Michaud, is survival, as it is for all forms of life. How to broaden our survival options is a question of how we can upgrade our evolutionary potential. From the essay:

The tools for the improvement of our survivability are guided evolution, conflict limitation, a balanced relationship to our Earthly environment, and space flight. The first three can improve our chances anywhere that humans live, but are presently limited to the Earth’s biosphere. Only space flight can give man the option of surviving no matter what happens on Earth, of spreading the human race throughout the universe, of opening up new environments for long-term human evolution.

There’s that phrase again: ‘long-term.’ To engage the public in a program for human expansion into the cosmos is to reverse the Apollo preoccupation with crash programs and near-term wins. A rational program to achieve starflight is not likely to happen against a ticking clock. Rather, it will be an effort that sustains itself philosophically across the decades and centuries such an effort will require, crossing many human generations. It will be an exploratory and expansionist meme that remains alive because its triggers are fundamental to our nature as human beings.

Let me quote Edmund Burke on this, because the views of the 18th Century political theorist and philosopher are much to the point:

Specifically, spaceflight challenges human capabilities and stimulates intellectual innovation. We are forced to develop new techniques, new materials and new forms of cooperation as we engage with a frontier more hostile than any we have known. Yes, these technologies will produce tangible results on Earth, many of which are obvious, from communications to power-generation. Mastering closed biospheres will teach us a great deal about our Earth. But we are also driven on a purely intellectual level to learn more about the cosmos, an engagement that broadens our understanding of physical law and provides context for all our science.

End of the Space Race

A goal of interstellar flight is not reached with a ‘space race’ mentality, although competition can boost interim steps — it will be interesting, for example, to see how the Western democracies react to a potential Chinese presence on the Moon. But the interstellar goal is too big to be comprehended by its individual components. It is a goal that begins in the short-term to expand our presence in the Solar System, reaping rewards like enhanced energy production and access to materials made available through exploitation of asteroids and other resources. There is in Michaud’s view a powerful encouragement to international cooperation in all this, for cutting costs if nothing else. Underlying early expansion is the reduction of existential risk, but also the possibility of diversifying the species as humans in new environments inevitably adapt.

Culturally, there is little to parallel the growth in philosophical perspective that may be gained by interacting with societies beginning to take hold in O’Neill-style colonies or on nearby planets like Mars, just as the Renaissance in Europe was bolstered by the influx of ideas and commodities from voyages of exploration. We might add a SETI imperative as well. If we do one day make contact with an extraterrestrial species, our own development off our world will likely be seen as an evolutionary step that is reproduced elsewhere in the universe. The potential growth in knowledge from such contact emphasizes space-based strategies to maximize the search.

All of these are short-term but necessary goals, each building on the other. But unlike Apollo, the species must have the broader context to work with. As Michaud writes:

Even if funding for major new projects seems unlikely now, interest must be kept alive. Industrial, labour, military, and scientific interests will continue to be important for the future of space flight, but farsighted political leaders also must mobilize public support with the excitement of exploration and discovery, of expansion and new opportunities, of the change in man’s place in the universe. They must hold out the promise of new and better lives, not just for a few astronauts, but for ordinary people.

None of this is easy to sell, but the collapse of interest post-Apollo should not be allowed to take hold as an inevitable consequence of success in space. The argument for a deep space exploration program is one that needs to be made again and again, for public sentiment changes slowly without precipitating events. But interplanetary growth must not become an end in itself. Interstellar flight, as Michaud reminds us, is open-ended. It opens before us an all but infinite frontier. That frontier is woven into our psychological and philosophical DNA as much as it is entwined with our evolutionary need for survival. We must continue to make the case.

Previous post: Planets to Be Discovered in the Outer System?