There are a lot of things that could prevent our species from expanding off-Earth and gradually spreading into the cosmos. Inertia is one of them. If enough people choose not to look past their own lifetimes as the basis for action, we’re that much less likely to think in terms of projects that will surely be multi-generational. That outcome doesn’t worry me overly much because it flies against the historical record. We have abundant evidence of long-term projects built by civilizations for their own purposes, and while we view pyramids or cathedrals differently than they did in their time, their artifacts show that humans are capable of this impulse. The Dutch dike system has been maintained for over 500 years, and precursor activity can be traced back as far as the 9th Century.

Nor am I concerned that most people won’t ever want to leave this planet. I have no ambition to leave it either, but in every era there have been small numbers of people who chose to leave what they knew to follow their impulses, whether they were explorers, exploiters or zealots. Given the opportunity, I’d say that spreading into the Solar System will happen as small outposts evolve into colonies, and colonies are gradually enlarged by the flow of the like-minded.

Or, at least, it will happen if we get past the L term in the famous Drake Equation, which on the level of technology describes the length of time a civilization can release detectable signals, and on a more profound level may describe the working lifetime of a technological society. It’s this factor that Adam Frank (University of Rochester) looks at in a recent New York Times essay. He’s studying the price we pay for developing a global industrial culture, wondering whether this ‘sustainability bottleneck’ may not account for the Fermi paradox; i.e., the lack of evidence for civilizations around nearby stars in an obviously fecund universe. 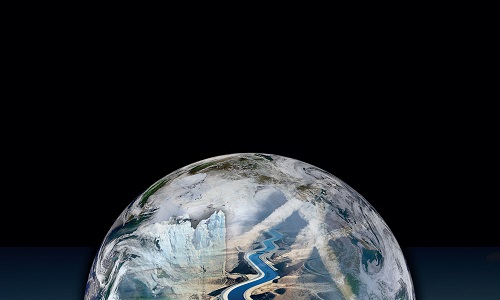 Image courtesy of University of Rochester.

Civilizations need energy to operate, and as Frank points out, waste (entropy) is an inevitable part of the process of energy generation. Humans harvest about 100 billion megawatt hours of energy every year, with the consequence that we put 36 billion tons of carbon dioxide into the biosphere. We can assume that other civilizations would face the same issues as they grew. We can also see the vast changes that both Mars and Venus have been through in our own Solar System as perhaps once habitable worlds were gradually transformed by natural processes. We’re beginning to piece together general rules that can help us understand what happens as biospheres change.

Some of this change happens without the mediation of living creatures, and some occurs because of them:

…any species climbing up the technological ladder by harvesting energy through combustion must alter the chemical makeup of its atmosphere to some degree. Combustion always produces chemical byproducts, and those byproducts can’t just disappear. As astronomers at Penn State recently discovered, if planetary conditions are right (like the size of a planet’s orbit), even relatively small changes in atmospheric chemistry can have significant climate effects. That means that for some civilization-building species, the sustainability crises can hit earlier rather than later.

Frank’s interest is in studying sustainability issues as a generic astrobiological problem. You’ll recall that we’ve looked at a paper of his on this idea before (see Astrobiology and Sustainability). Working with Woodruff Sullivan (University of Washington), Frank talks in reference to Species with Energy-Intensive Technology (SWEIT), and argues that we can profitably study not only other worlds but our own previous eras of climate alteration for insight. The research program that grows out of this models SWEIT evolution along with that of the planet on which it arises with a methodology based on dynamical systems theory.

Earth’s own past suggests how complex these interrelationships can be. There was a time about two billion years after the formation of the planet when anaerobic bacteria utterly changed the biosphere by driving up the oxygen content in the atmosphere, a form of what was then pollution eventually becoming an essential for life such as ours. Never mind technology — life itself can be a game-changer. With such principles in mind, Frank and Sullivan are interested in the ‘trajectories’ civilizations take as shaped by the choices they make, some of which could result in population collapse while others lead to long-lived technological societies.

It’s always possible, Frank speculates, that we have a Fermi paradox because no civilization makes it through its sustainability crisis. But there are models that indicate this doesn’t have to happen.

By studying sustainability as a generic astrobiological problem, we can understand if the challenge we face will be like threading a needle or crossing a wide valley. Answering this question demands a far deeper understanding of how planets respond to the kind of stresses energy-intensive species (like ours) place on them. It’s an approach no different from that of doctors using different kinds of animals, and their molecular biology, to discover cures for human disease.

So maybe we’re not the only ones to tackle these problems, which are the consequences of physical laws that govern the interactions between planets and the life they sustain. We don’t have enough knowledge to provide the answer, not yet, but the generic problem is one that advanced civilizations anywhere must at some time face. I leave it to specialists like Frank to discover whether the ‘needle’ or the ‘valley’ is the best metaphor. My own suspicion is that sustainability is a manageable matter, while civilizational collapse through inadvertence via war or accident is the more likely outcome. That’s the filter on L that keeps me up at night.