Not long ago we looked at a paper from Rodrigo Luger and Rory Barnes (University of Washington) making the case that planets now in a red dwarf’s habitable zone may have gone through a tortured history. Because of tidal forces causing surface volcanism and intense stellar activity in young stars, a planet’s supply of surface water may be lost entirely. As the red dwarf slowly settles into the main sequence, the upper atmosphere of a planet in what will eventually become its habitable zone can be heated enough to cause its hydrogen to escape into space.

Remember that M-dwarfs have a long, slow contraction phase, one that can last as long as a billion years. That exposes planets formed in what will ultimately become the habitable zone to extreme radiation, with hydrogen loss leading to a dessicated surface inimical to life. In such worlds, a dense oxygen envelope could remain, in which case we might detect oxygen and mistakenly take it for a bio-signature (see Enter the ‘Mirage Earth’ for more on this idea).

But it turns out there is a flip side to this question, for planets don’t necessarily stay where they formed. Tidal forces can also cause a planet to move closer to its star, a process known as planetary migration. Barnes and Luger have been using computer models to show that the same forces of tidal distortion and atmospheric escape can take a planet that began as a ‘mini-Neptune’ in the outer reaches of the system and turn it into a potentially habitable world.

A mini-Neptune that formed far enough away from its host star to form an icy, rocky core and a dense atmosphere of hydrogen and helium may eventually be drawn into the star’s habitable zone, where the levels of X-ray and ultraviolet radiation are much higher. Now the loss of atmospheric gases can be a plus, for if conditions are right, a hydrogen-free, rocky world may emerge. The decrease in stellar radiation is steep with time, leading to negligible mass loss after about a billion years. The result is what the researchers call a ‘habitable evaporated core’ (HEC), a world that is likely to have abundant water thanks to the icy core of its initial formation. 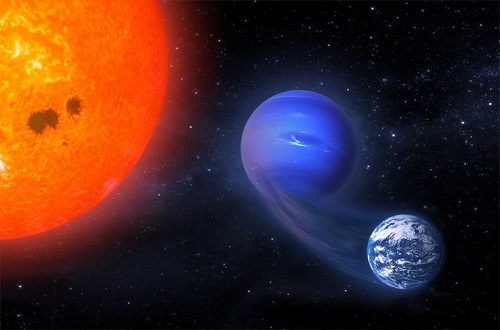 Image: Strong irradiation from the host star can cause planets known as mini-Neptunes in the habitable zone to shed their gaseous envelopes and become potentially habitable worlds.Rodrigo Luger / NASA images.

Of course, timing is everything. Assume a slow enough loss of hydrogen and helium and the gaseous envelope remains as the star continues to cool. We’re left with a mini-Neptune in the habitable zone. And as we’ve seen, too fast a hydrogen loss can result in a runaway greenhouse effect and a world that is bone-dry. But thread the needle here and you could wind up with a mini-Neptune transforming into a small rocky planet in the habitable zone of its star. Whether or not such a world would be suitable for life is a question the researchers intend to study. “Either way,” says Luger, “these evaporated cores are probably lurking out there in the habitable zones of these stars, and many may be discovered in the coming years.”

So habitable planets around M dwarfs may be those that formed far from the host star as gas-rich mini-Neptunes, worlds that migrated early on into the habitable zone from beyond the snow line. The dense hydrogen/helium atmosphere in this case becomes a way to shield the surface from high radiation levels as the star continues to contract. From their simulations, the researchers argue that up to a few Earth masses of hydrogen and helium can be removed from such planets in the process of turning them into habitable evaporated cores. From the paper:

This process is most likely for mini-Neptunes with solid cores on the order of 1 M⊕ and up to about 50% H/He by mass, and can occur around all M dwarfs, particularly close to the inner edge of the HZ. HECs are less likely to form around K and G dwarfs because of these stars’ shorter super-luminous pre-main sequence phases and shorter XUV saturation timescales. Furthermore, we find that HECs cannot form from mini-Neptunes with core masses greater than about 2 M⊕ and more than a few percent H/He by mass; thus, massive terrestrial super-Earths currently in the HZs of M dwarfs have probably always been terrestrial. Our results are thus similar to those of Lammer et al. (2014), who showed that planets more massive than ∼ 1.5 M⊕ typically cannot lose their accreted nebular gas in the HZs of solar-type stars.

M dwarfs are excellent targets for finding potentially habitable planets, with their habitable zones close to the star and the marked transit depth of a world of Earth-size or larger moving across the disk. So as we begin to detect Earth-mass planets around M dwarfs in coming years, we may be detecting habitable evaporated cores, planets of obvious astrobiological interest.

Next post: A Review of the Best Habitable Planet Candidates