With the 2016 budget cycle beginning, it’s heartening to see that Europa factors in as a target amidst a White House budget request for NASA of $18.5 billion, higher than any such request in the last four years, and half a billion dollars more than the agency received in the 2015 budget. This follows Congress’ NASA budget increase of last year. Casey Dreier, who follows space policy issues for The Planetary Society, cites what he calls a ‘new commitment to Europa’, as seen in a request for $30 million to start the mission planning process. Dreier adds:

At its most basic level, it means that NASA can pursue the development process to create a mission to explore Europa. That’s new, and that’s important. Europa has moved from “mission concept” to “mission,” with details to figure out, plans to draw, teams to assemble, and hardware to build (eventually). It’s a step that Congress could not force NASA to take (NASA being an executive branch agency and all) no matter how much money it gave to them. The White House and NASA deserve credit for deciding to pursue this mission. In fact, I believe that this budget will occupy a small place in history as document that officially began the exploration of Europa.

I leave you to Dreier’s analysis for details about other budget components so we can focus this morning on Europa. But do keep in mind that while we’re only at the beginning of a budget debate, documents like these are nonetheless critical in setting the terms under discussion and keeping key mission ideas current. While we’ve seen huge changes in direction and mission targets over the past fifteen years, the persistence of Europa as a focus for robotic exploration is heartening, and it’s a focus buttressed by the outstanding results from Cassini at Saturn.

The Europa Clipper mission that may emerge from all this bears in its projected operations a certain similarity to Cassini, in that over the years since the latter began orbiting Saturn, we’ve learned a huge amount about Saturn’s moons from flybys. Just as Cassini has opened up detailed study of Titan, Europa Clipper would be an orbiter that would make forty to fifty flybys of Europa’s surface during its primary mission. This will demand a highly elliptical orbit aimed at minimizing radiation damage and a spacecraft heavily shielded against dangerous particles. 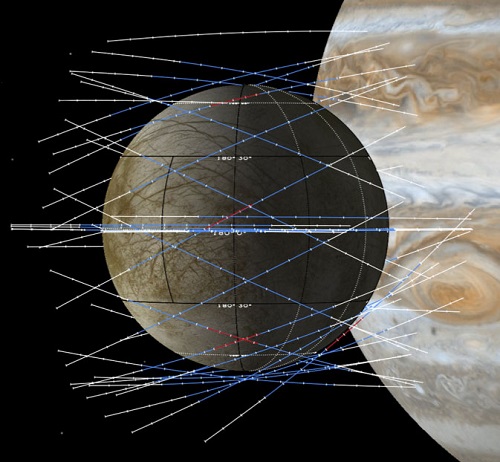 So no landing on Europa — not at this stage of the game — but a series of close Europa flybys at altitudes ranging from 2700 kilometers down to 25 kilometers would give us priceless information. If the moon really does have geysers that vent water from the presumed deep ocean below the ice, a spacecraft this close to the surface could take samples, in addition to giving us close-up views of the reddish veins that so distinctively mark the crust, possibly containing organic compounds that may be involved in cycling between surface and sea.

Also positive is the news that the current budget request will contain funding for the instruments NASA intends to contribute to the European Space Agency’s Jupiter Icy Moons Explorer mission (JUICE), which is to launch in 2022 (see Jupiter Icy Moons Explorer). Arriving in Jupiter space in 2030, the mission is to spend several years studying not just Europa but Ganymede and Callisto as well, all three being candidates for subsurface oceans. After flybys of Europa and Callisto, (including measurements of the thickness of Europa’s crust), the spacecraft will enter orbit around Ganymede to study the surface and structure of the only Solar System moon known to generate its own magnetic field.

This JPL page on Europa Clipper notes that it too would make flybys of Ganymede and Callisto, but only for the sake of orbital adjustments, the primary mission being Europa. There, the campaign would consist of four segments designed to produce maximum coverage of the surface under consistent lighting conditions. From the document:

During each flyby, a preset sequence of science observations would be executed. On approach the spacecraft would perform low-resolution global scans with its IR spectrometer (“nodding” the spacecraft’s field of view back and forth across the moon, much like the Cassini spacecraft does during its moon flybys), followed by high-resolution scans with that instrument. At 1,000 km the ice-penetrating radar, topographic imager and ion and neutral mass spectrometer (INMS) would power up. The radar pass would occur from 250 miles (400-km) inbound altitude to 250 miles (400-km) outbound altitude, during which stereo imaging and INMS data are acquired continuously. During departure, the IR spectrometer would conduct additional high- and low-resolution scans as the spacecraft moves away from Europa.

And apropos of yesterday’s discussion of CubeSats, I want to note that NASA is looking at proposals from ten universities for CubeSat concepts to enhance Europa Clipper, an announcement that was made last October. The idea here is to carry small probes as auxiliary payloads that would be released in the Jovian system for further measurements of Europa. According to the agency, the science objectives for potential CubeSat probes include reconnaissance for future landing sites, gravity fields, magnetic fields, atmospheric and plume science, and radiation measurements. The latter may be a showstopper, in my view, given the radiation environment in which these diminutive spacecraft would be forced to operate.

So the outer planet news is at least momentarily positive, and as Phil Plait reminds us in NASA Has Its Sights Set on Europa, the Europa Clipper mission has a strong champion in Congress in Rep. John Culberson (R-Texas), whose support has been useful to NASA in past debates. With a launch in the early 2020s and a 6.5-year journey to Jupiter that includes gravity assists around Venus and (twice) the Earth, Europa Clipper could open up the next phase of outer planet exploration, followed shortly thereafter by the arrival of JUICE. That would make the years around 2030 a golden era for our understanding of Jupiter’s provocative moons.

Next post: On the Role of Humans in Starflight