On the Role of Humans in Starflight

What does it take to imagine a human future among the stars? Donald Goldsmith asks the question in a recent op-ed for Space.com called Does Humanity’s Destiny Lie in Interstellar Space Travel, playing off the tension between successful robotic exploration that has taken us beyond the heliosphere and the human impulse for personal experience of space. Along the way he looks at options for star travel both fast (wormholes) and slow (nuclear pulse, or Orion).

A fine science writer who worked with Neil deGrasse Tyson on Origins: Fourteen Billion Years of Cosmic Evolution, Goldsmith nails several key issues. The successes of robotic exploration are obvious, and we’re in the midst of several more energizing episodes — the arrival of Dawn at Ceres and the approach of New Horizons to Pluto/Charon, as well as the recent cometary exploits of Rosetta. We have much to look forward to and, as mentioned yesterday, new impetus has arisen for the Europa Clipper mission, which would constitute a fine tandem operation with the ESA’s Jupiter Icy Moons Explorer.

Freeman Dyson, in fact, thinks the success of robotics is so marked that the real work will necessarily be done by machines, with human travel in space in the category of entertainment rather than science. But Goldsmith finds this unsatisfying, and I think he speaks for quite a few people when he says a human presence on places like Mars speaks to our deepest impulses:

Just about everyone welcomes new information about the solar system, but what many really — really — want is for humanity to plant its boots on new soil, as Earth-bound explorers have done for many centuries. Lonely humans in space speak directly to our emotions, but pioneering spacecraft far less so. (Even an apparent exception, such as the hero of the movie “WALL-E,” connects with us through its seeming humanity, a fact that won’t surprise anyone who reflects for a moment on how storytelling works.)

Machines get more powerful at a mind-numbing pace, while the evolutionary changes that help us adapt to new environments move with far slower rhythms. Hybrids of human and machine may one day be feasible, or some kind of mind-uploading (a prospect I still think unworkable, as it tries to fit a consciousness that is the result of evolution in a physical body into an alien matrix). There is also the prospect of artificial intelligence achieving human-like capabilities, as witness the poetic, deeply introspective star-probe of Greg Bear’s novel Queen of Angels.

But for those who insist upon human bodies aboard a starship, these options aren’t enough, which leads us to the confrontation with the reality of distance, the nearest star, Proxima Centauri, being approximately 260,000 times the distance from the Earth to the Sun. Goldsmith takes a look at the Project Orion study in which Dyson played such a major role, envisioning a spacecraft that would be driven by a series of nuclear explosions behind the craft, their energies extracted by a pusher plate and a crew-saving system of enormous shock absorbers. 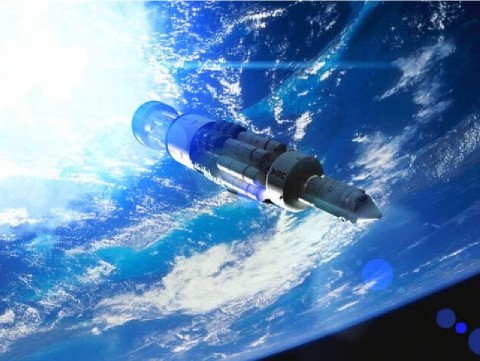 Image: An early conception of Orion as an interplanetary vehicle, one that would eventually be reworked into Freeman Dyson’s interstellar design. Credit: Adrian Mann.

Dyson’s 1968 paper on the ultimate Orion, a starship capable of reaching the nearest stars in 140 years, gave us what Goldsmith calls ‘the gold standard for visions of interstellar travel,’ in that Orion used technologies not impossibly far from what was currently available. But it’s telling that Dyson still sees the key requirement for interstellar flight as a society that can think in terms of centuries and work with long-term planning and execution of generational projects. Orion ran afoul of test ban treaties and the ever-controversial issue of radiation, but in any case it’s hard to see a culture with such short time-horizons as ours building such a vessel.

I’m glad to see Goldsmith referring to Steve Kilston’s ideas on slow expansion, which throws out the false dichotomy between fast results or none at all. Kilston’s idea is best described as a worldship, one we’ve looked at before in these pages. An astronomer and something of a philosopher, Kilston believes that within 500 years we will be able to build a vast structure capable of carrying a million people on a journey at a small fraction of the speed of light. It’s a generation ship, and one that banks on serious changes in the human outlook. Says Goldsmith:

Kilston’s “Plausible Path,” like any other low-velocity journey, requires that generations upon generations of spacefarers pass their entire lives short of their goal. Today, this plan would attract few volunteers. But if human society came to feel sure of its long-term viability, so that our time horizon stretched beyond the current limits of (at most) our grandchildren’s lifetimes, the situation would become quite different. Perhaps the wisest aspect of Kilston’s plan lies in its final pre-launch phase: a 100-year cruise through the solar system to demonstrate the full feasibility of the spacecraft and the willingness of its crew to pass their lives in space.

You can read more about Kilston’s ‘plausible path’ in The Ultimate Project, a presentation the scientist made at the Jet Propulsion Laboratory back in 2006. What he is arguing is that starflight will not become a reasonable expectation unless we reach a point where at least some people think that travel times of thousands of years are acceptable given the goal to be accomplished. Here I want to quote Kilston himself, from a comment he wrote on this site in 2013, responding to a suggestion that there may be reasons for interstellar flight that are irrational:

I’m not sure there is such a thing as an “irrational reason” — explanations and motivations certainly should pay attention to emotional factors. The pursuit of long-term goals and dreams is as vital for our mental and societal health as a concern and empathy for other humans is.

Children respond with wonder and enthusiasm when they hear about a grand project like interstellar travel. It can continue to magnificently inspire them long after we initiate it. As Pierre Teilhard de Chardin wrote, “The future belongs to those who give the next generation reason for hope.”

Goldsmith himself seems to be in this camp. And I think he’s practical enough to acknowledge that the outcome is very much up to us. There is no certainty that our species will ever attain interstellar flight, but if we are to make it happen, we’ll have to learn how to live off the Earth long-term. That would in my view involve ever increasing colonization within the Solar System to master the technologies needed for starflight and the human issues of survival in deep space.

At that point, I see no reason why space habitats on the scale of what Steve Kilston has long studied could not be built, either as explicit starships or as O’Neill-style colony worlds. Would generations accustomed to living in constructed habitats like these eventually decide to take one of their vessels all the way to another star? We have trouble imagining people who would be willing to live this way, but several centuries of technological development and experience in space could make the prospect far less onerous. I agree with Kilston that it’s a plausible path, and whether it happens or not, we still have rapidly advancing artificial intelligence to fall back on. In one form or another, I think human efforts will indeed result in interstellar journeys.