Watching Ceres gradually take on focus and definition is going to be one of the great pleasures of February. The latest imagery comes from February 4, with the spacecraft having closed to about 145,000 kilometers. Here we’re looking at a resolution of 14 kilometers per pixel, the best to date, but only a foretaste of what’s to come. For perspective, keep in mind that while Ceres is the largest object in the main asteroid belt, its diameter is a scant 950 kilometers. Is there an ocean under this surface? 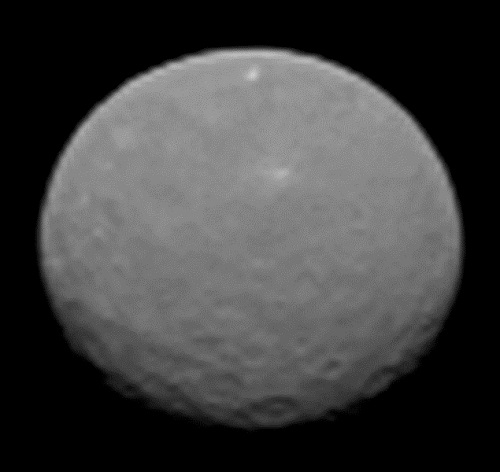 Meanwhile, a good deal further out in the system, a small vial of Clyde Tombaugh’s ashes continues its remarkable trek, with new imagery from New Horizons, the spacecraft carrying it, being released on the same day the Ceres images were taken, February 4, which happens to be Tombaugh’s birthday. Born in 1906, Tombaugh’s long life ended in 1997, and he has stayed very much in the thoughts of New Horizons principal investigator Alan Stern, who commented:

“This is our birthday tribute to Professor Tombaugh and the Tombaugh family, in honor of his discovery and life achievements — which truly became a harbinger of 21st century planetary astronomy. These images of Pluto, clearly brighter and closer than those New Horizons took last July from twice as far away, represent our first steps at turning the pinpoint of light Clyde saw in the telescopes at Lowell Observatory 85 years ago, into a planet before the eyes of the world this summer.”

As with Ceres, we’ll be watching a distant speck turn into an actual place with features we’ll need to name as this year moves forward. The image at left, taken at a distance of over 200 million kilometers, come from New Horizons’ telescopic Long-Range Reconnaissance Imager (LORRI), an animation assembled from separate images taken on January 25 and January 27, which makes them the first acquired during the approach phase of the mission. The spacecraft’s flyby of Pluto/Charon takes place on July 14.

Image: A long distance look from LORRI: Pluto and Charon, the largest of Pluto’s five known moons, seen Jan. 25 and 27, 2015, through the telescopic Long-Range Reconnaissance Imager (LORRI) on NASA’s New Horizons spacecraft. New Horizons was about 203 million kilometers from Pluto when the frames to make the first image were taken; about 2.5 million kilometers closer for the second set. These images are the first acquired during the spacecraft’s 2015 approach to the Pluto system, which culminates with a close flyby of Pluto and its moons on July 14. Credit: NASA/Johns Hopkins University Applied Physics Laboratory/Southwest Research Institute.

So now New Horizons is giving us Pluto at the 2-pixel level, with Charon subtending 1 pixel as seen by LORRI, which JHU/APL describes as “ essentially a digital camera with a large telephoto telescope.” The exposure time here is one-tenth of a second, too short to make any of Pluto’s other moons, much smaller than Charon, visible. We’ll have the satisfaction of watching this system grow in our field of view over the coming months. Along the way, New Horizons will take many images of Pluto against background stars to refine distance estimates and plan course corrections needed for the flyby.

Image: Six Months of Separation: A comparison of images of Pluto and its large moon Charon, taken in July 2014 and January 2015. Between takes, New Horizons had more than halved its distance to Pluto, from about 425 million kilometers to 203 million kilometers. Pluto and Charon are four times brighter than and twice as large as in July, and Charon clearly appears more separated from Pluto. These two images are displayed using the same intensity scales. In LORRI’s current view, Pluto and Charon subtend just 2 pixels and 1 pixel, respectively, compared to 1 pixel and 0.5 pixels last July. The images were magnified four times to make Pluto and Charon more visible. Both images were rotated to show the celestial north pole at the top. Credit: NASA/Johns Hopkins University Applied Physics Laboratory/Southwest Research Institute.

As to Clyde Tombaugh, whenever I think of him, I think of Michael Byers’ splendid portrait in his novel Percival’s Planet (Henry Holt, 2010), although to be sure, Byers focuses not just on Tombaugh but on the entire enterprise of planet-finding and the nature of obsession (the latter being Percival Lowell’s fixation on ‘Planet X’ as well as the private demons of his subordinates). My earlier review of Percival’s Planet is here. Tombaugh was a Kansas farmboy who could grind lenses like no one else, a self-educated master craftsman whose eye for detail would change our view of the Solar System. What a pleasure to hear the words of his daughter in this New Horizons news release:

“My dad would be thrilled with New Horizons,” said Annette Tombaugh, Clyde Tombaugh’s daughter, of Las Cruces, New Mexico. “To actually see the planet that he had discovered and find out more about it, to get to see the moons of Pluto … he would have been astounded. I’m sure it would have meant so much to him if he were still alive today.” 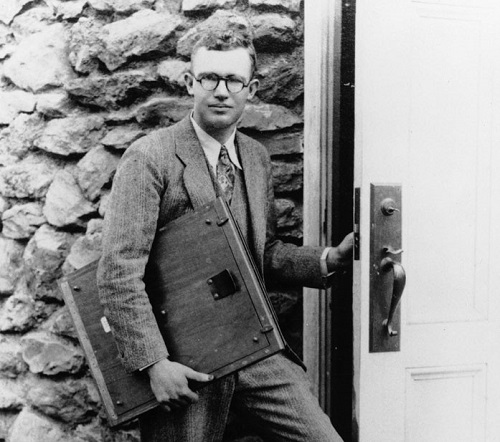 My favorite photograph of Tombaugh has always been the one above (from the collection at New Mexico State University). Look at the sheer determination in that face! This is a man who knows what he is about — I wish I had known him.

Previous post: On the Role of Humans in Starflight