A small satellite designed to study and characterize exoplanet atmospheres is being developed by University College London (UCL) and Surrey Satellite Technology Ltd (SSTL) in the UK. Given the engaging name Twinkle, the satellite is to be launched within four years into a polar low-Earth orbit for three years of observations, with the potential for an extended mission of another five years. SSTL, based in Guildford, Surrey and an experienced hand in satellite development, is to build the spacecraft, with scientific instrumentation in the hands of UCL.

The method here is transmission spectroscopy, which can be employed when planets transit in front of their star as seen from Earth. Starlight passing through the atmosphere of the transiting world as it moves in front of and then behind the star offers a spectrum that can carry the signatures of the various molecules there, a method that has been used on a variety of worlds like the Neptune-class HAT-P-11b and the hot Jupiter HD 189733b. The goal of the Twinkle mission is to analyze at least 100 planets ranging from super-Earths to hot Jupiters, producing temperatures and even cloud maps. 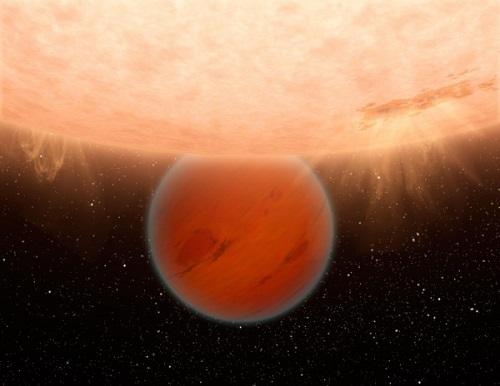 Image: This artist’s impression depicts a Neptune-class world grazing the limb of its star as seen from our vantage point. Analyzing starlight as transiting worlds pass in front of and then behind their star can tell us much about the constituents of the planet’s atmosphere. Credit: NASA/JPL-Caltech.

Giovanna Tinetti (UCL), lead scientist for the mission, describes it as the first mission dedicated to analyzing exoplanet atmospheres, adding that understanding the chemical composition of an atmosphere serves as a key to the planet’s background. Distance from the parent star, notes this UCL news release, affects the chemistry and physical processes driving an atmosphere, and the atmospheres of small, terrestrial-class worlds, like that of our own Earth, can evolve substantially from their initial state through impacts with other bodies, loss of light molecules, volcanic activity or the effect of life. The atmosphere, then, can help us trace a planet’s history as we learn whether it was born in its current orbit or migrated from another part of the system..

I should mention that Tinetti was deeply involved in the discovery of water and methane in the atmosphere of HD 189733b. From Tinetti’s website at University College London:

A key observable for planets is the chemical composition and state of their atmosphere. Knowing what atmospheres are made of is essential to clarify, for instance, whether a planet was born in the orbit it is observed in or whether it has migrated a long way; it is also critical to understand the role of stellar radiation on escape processes, chemical evolution and climate. The atmospheric composition is the only indicator able to discriminate an habitable/inhabited planet from a sterile one.

Twinkle was presented several days ago at an open meeting of the Royal Astronomical Society. Interestingly, the mission is being developed with a mixture of private and public sources, at a total cost of about £50 million, including launch. That number seems strikingly low to me, with mission designers claiming that Twinkle is a factor of ten times cheaper to build and operate than other spacecraft developed through international space agency programs. The low cost is being attributed to the use of off-the-shelf components and growing expertise in small mission development. These numbers will be worth remembering if Twinkle performs as expected.