One of the big arguments against habitable planets around low mass stars like red dwarfs is the likelihood of tidal effects. An Earth-sized planet close enough to a red dwarf to be in its habitable zone should. the thinking goes, become tidally locked, so that it keeps one face toward its star at all times. The question then becomes, what kind of mechanisms might keep such a planet habitable at least on its day side, and could these negate the effects of a thick dark-side ice pack? Various solutions have been proposed, but the question remains open.

A new paper from Jérémy Leconte (Canadian Institute for Theoretical Astrophysics, University of Toronto) and colleagues now suggests that tidal effects may not be the game-changer we assumed them to be. In fact, by developing a three-dimensional climate model that predicts the effects of a planet’s atmosphere on the speed of its rotation, the authors now argue that the very presence of an atmosphere can overcome tidal effects to create a cycle of day and night.

The paper, titled “Asynchronous rotation of Earth-mass planets in the habitable zone of lower-mass stars,” was published in early February in Science. The authors note that the thermal inertia of the ground and atmosphere causes the atmosphere as a whole to lag behind the motion of the star. This is seen easily on Earth, when the normal changes we expect from night changing to day do not track precisely with the position of the Sun in the sky. Thus the hottest time of the day is not when the Sun is directly overhead but a few hours after this.

Because of this asymmetry in the atmospheric mass redistribution with respect to the subsolar point, the gravitational pull exerted by the Sun on the atmosphere has a nonzero net torque that tends to accelerate or decelerate its rotation, depending on the direction of the solar motion. Because the atmosphere and the surface are usually well coupled by friction in the atmospheric boundary layer, the angular momentum transferred from the orbit to the atmosphere is then transferred to the bulk of the planet, modifying its spin.

This effect is relatively minor on Earth thanks to our distance from the Sun, but is more pronounced on Venus, where the tug of tidal friction that tries to spin the planet down into synchronous rotation is overcome by the ‘thermal tides’ caused by this atmospheric torque. But Venus’ retrograde rotation has been attributed to its particularly massive atmosphere. The question becomes whether these atmospheric effects can drive planets in the habitable zone of low mass stars out of synchronous rotation even if their atmosphere is relatively thin.

Pressure units in a planetary atmosphere are measured in bars — the average atmospheric pressure at Earth’s surface is approximately 1 bar (contrast this with the pressure on Venus of 93 bars). The paper offers a way to assess the efficiency of thermal tides for different atmospheric masses, with results that make us look anew at tidal lock. For the atmospheric tide model that emerges shows that habitable Earth-like planets with a 1-bar atmosphere around stars more massive than ~0.5 to 0.7 solar masses could overcome the effects of tidal synchronization. It’s a powerful finding, for the effects studied here should be widespread:

Atmospheres as massive as 1 bar are a reasonable expectation value given existing models and solar system examples. This is especially true in the outer habitable zone, where planets are expected to build massive atmospheres with several bars of CO2. So, our results demonstrate that asynchronism mediated by thermal tides should affect an important fraction of planets in the habitable zone of lower-mass stars.

Here is the graph from the paper that illustrates the results: 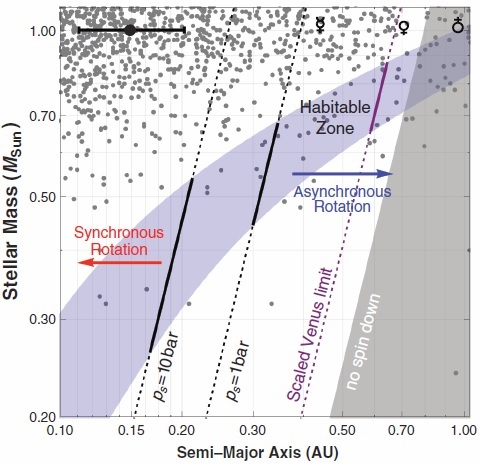 Image: Spin state of planets in the habitable zone.The blue region depicts the habitable zone, and gray dots are detected and candidate exoplanets. Each solid black line marks the critical orbital distance (ac) separating synchronous (left, red arrow) from asynchronous planets (right, blue arrow) for ps = 1 and 10 bar (the extrapolation outside the habitable zone is shown with dotted lines). Objects in the gray area are not spun down by tides. The error bar illustrates how limits would shift when varying the dissipation inside the planet (Q ~ 100) within an order of magnitude. Credit: Jérémy Leconte et al.

The result suggests that we may find planets in the habitable zone of lower-mass stars that are more Earth-like than expected. Do away with the permanent, frozen ice pack on what had been assumed to be the ‘dark side’ and water is no longer trapped, making it free to circulate. The implications for habitability seem positive, with a day-night cycle of weeks or months distributing temperatures, but Leconte remains cautious: “Whether this new understanding of exoplanets’ climate increases the ability of these planets to develop life remains an open question.”

The paper is Leconte et al., “Asynchronous rotation of Earth-mass planets in the habitable zone of lower-mass stars,” Science Vol. 347, Issue 6222 (6 February 2015). Abstract / preprint available. Thanks to Ashley Baldwin for a pointer to and discussion of this paper.