A Full Day at Pluto/Charon

Have a look at the latest imagery from the New Horizons spacecraft to get an idea of how center of mass — barycenter — works in astronomy. When two objects orbit each other, the barycenter is the point where they are in balance. A planet orbiting a star may look as if it orbits without influencing the much larger object, but in actuality both bodies orbit around a point that is offset from the center of the larger body. A good thing, too, because this is one of the ways we can spot exoplanets, by the observed ‘wobble’ in the stars they orbit.

The phenomenon is really evident in what the New Horizons team describes as the ‘Pluto-Charon dance.’ Here we have a case where the two objects are close enough in size — unlike planet and star, or the Moon and the Earth — so that the barycenter actually falls outside both of them. The time-lapse frames in the movie below show Pluto and Charon orbiting a barycenter above Pluto’s surface, where Pluto and Charon’s gravity effectively cancel each other. Each frame here has an exposure time of one-tenth of a second.

Charon is about one-eighth as massive as Pluto. The images in play here come from New Horizons’ Long-Range Reconnaissance Imager (LORRI), being made between January 25th and 31st of this year. The New Horizons team is in the midst of an optical navigation (Opnav) campaign to nail down the locations of Pluto and Charon as preparations continue for the July 14th flyby. None of the other four moons of Pluto are visible here because of the short exposure times, but focus in on Charon. We’re looking at an object about the size of Texas.

Now take a look at Pluto/Charon back in 1978 when James Christy, an astronomer at the U.S. Naval Observatory, could see it using the 1.55-m (61-inch) Kaj Strand Astrometric Reflector at the USNO Flagstaff Station in Arizona. Christy was studying what was then considered to be a solitary ‘planet’ (since demoted) when he noticed that in a number of the images, Pluto seemed to be elongated, a distortion in shape that varied with respect to background stars over time. The discovery of a moon was formally announced in early July of that year by the International Astronomical Union. Charon received its official name in 1985. 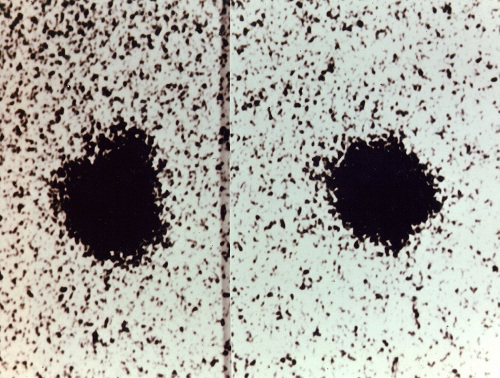 Image: What Pluto/Charon looked like to James Christy in 1978. Credit: U.S. Naval Observatory.

“These images allow the New Horizons navigators to refine the positions of Pluto and Charon, and they have the additional benefit of allowing the mission scientists to study the variations in brightness of Pluto and Charon as they rotate, providing a preview of what to expect during the close encounter in July.”

That’s an encounter that will close an early chapter in space exploration — all nine of the objects formerly designated planets will have had close-up examination — but of course it opens up yet another, as New Horizons looks toward an encounter with a Kuiper Belt object as it moves ever outward. Just as our Voyagers are still communicating long after Voyager 2 left Neptune, New Horizons gives us much to look forward to.