A Black Hole of Information?

A couple of interesting posts to talk about in relation to yesterday’s essay on the Encyclopedia Galactica. At UC-Santa Cruz, Greg Laughlin writes entertainingly about The Machine Epoch, an idea that suggested itself because of the spam his systemic site continually draws from “robots, harvesters, spamdexing scripts, and viral entities,” all of which continually fill up his site’s activity logs as they try to insert links.

Anyone who attempts any kind of online publishing knows exactly what Laughlin is talking about, and while I hate to see his attention drawn even momentarily from his ongoing work, I always appreciate his insights on systemic, a blog whose range includes his exoplanet analyses as well as his speculations on the far future (as I mentioned yesterday, Laughlin and Fred Adams are the authors behind the 1999 title The Five Ages of the Universe, as mind-bending an exercise in extrapolating the future as anything I have ever read). I’ve learned on systemic that he can take something seemingly mundane and open it into a rich venue for speculation.

So naturally when I see Laughlin dealing with blog spam, I realize he’s got much bigger game in mind. In his latest, spam triggers his recall of a conversation with John McCarthy, whose credentials in artificial intelligence are of the highest order. McCarthy is deeply optimistic about the human future, believing that there are sustainable paths forward. He goes so far as to say “There are no apparent obstacles even to billion year sustainability.” Laughlin comments:

Optimistic is definitely the operative word. It’s also possible that the computational innovations that McCarthy had a hand in ushering in will consign the Anthropocene epoch to be the shortest — rather than one of the longest — periods in Earth’s geological history. Hazarding a guess, the Anthropocene might end not with the bang with which it began, but rather with the seemingly far more mundane moment when it is no longer possible to draw a distinction between the real visitors and the machine visitors to a web site.

Long or short-term? A billion years or a human future that more or less peters out as we yield to increasingly powerful artificial intelligence? We can’t know, though I admit that by temperament, I’m in the McCarthy camp. Either way, an Encyclopedia Galactica could get compiled by whatever kind of intelligences arise and communicate with each other in the galaxy.

Of course, one problem is that any encyclopedia needs material to work with, and we are seeing some signs that huge amounts of information may now be falling into what Google’s Vinton Cerf, inventor of the TCP/IP protocols that drive the Internet, calls “an information black hole.”

Speaking at the American Association for the Advancement of Science’s annual meeting in San Jose (CA), Cerf asked whether we are facing into a century’s worth of ‘forgotten data,’ noting how much of our lives — our letters, music, family photos — are now locked into digital formats. Cerf’s warning, reported by The Guardian in an article called Google boss warns of ‘forgotten century’ with email and photos at risk, is stark:

“We are nonchalantly throwing all of our data into what could become an information black hole without realising it. We digitise things because we think we will preserve them, but what we don’t understand is that unless we take other steps, those digital versions may not be any better, and may even be worse, than the artefacts that we digitised… If there are photos you really care about, print them out.” 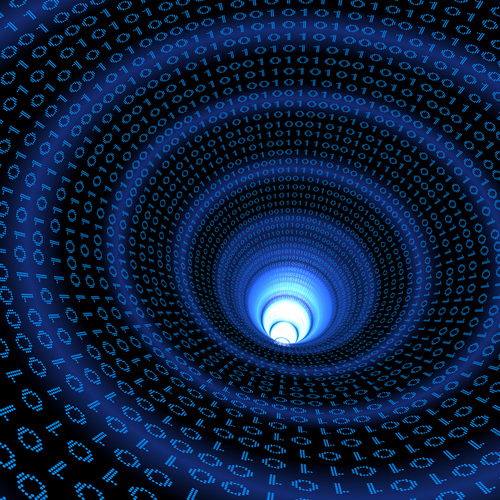 If that seems extreme, consider that no special technology was needed to read stored information from our past, from the clay tablets of ancient Mesopotamia to the scrolls and codices on which early historians and later medieval monks recorded their civilization. A great library is a grand thing that does not demand dedicated hardware and software to use. ‘Bit rot’ occurs when the equipment on which we record our data becomes obsolete — a box of floppy disks sitting on my file cabinet mutely reminds me that I currently have no way to read them.

Cerf’s point isn’t that information can’t be migrated from one format to another. We’ll surely preserve documents, photos, audio and video considered to be significant in many formats. But what’s surprising when you start prowling a big academic library is how often the most insignificant things can act as pointers to useful information. A bus schedule, a note dashed off by the acquaintance of an artist, a manuscript filed under the wrong heading — all these can unlock parts of our history, and we can assume the same about many a casual email.

Historians have learned how the greatest mathematician of antiquity considered the concept of infinity and anticipated calculus in 3 BC after the Archimedes palimpsest was found hidden under the words of a Byzantine prayer book from the 13th century. “We’ve been surprised by what we’ve learned from objects that have been preserved purely by happenstance that give us insights into an earlier civilisation,” [Cerf] said.

Will we preserve what we need to so that we have the kind of record of our time that is so tightly locked up in the books and artifacts of previous eras? The article mentions work at Carnegie Mellon University in Pittsburgh, where a project called Olive is archiving early versions of software. The project allows a computer to mimic the device the original software ran on, a technology that seems a natural solution as we try to record the early part of the desktop computer era. We’ll be refining such solutions as we continue to address this problem.

Cerf talks about preserving information for hundreds or thousands of years, but of course what we’d like to see is a seamless way to migrate our cultural output through advancing levels of technology so that if John McCarthy’s instincts are right, our remote ancestors will still have access to the things we did and said, both meaningful and seemingly inconsequential. That’s a long way from an Encyclopedia Galactica, but learning how to do this could teach us principles of archiving and preservation that could eventually feed such a compilation.