Soft Robotics for a Europa Rover

Approaching problems from new directions can be unusually productive, something I always think of in terms of Mason Peck’s ideas on using Jupiter as a vast accelerator to drive a stream of micro-spacecraft (Sprites) on an interstellar mission. Now Peck, working with Robert Shepherd (both are at Cornell University) is proposing a new kind of rover, one ideally suited for Europa. The idea, up for consideration at the NASA Innovative Advanced Concepts (NIAC) program, is once again to exploit a natural phenomenon in place of a more conventional technology. What Peck and Shepherd have in mind is the use of ‘soft robotics’ — autonomous machines made of low-stiffness polymers or other such material — to exploit local energy beneath Europa’s ice.

We’re at the edge of a new field here, with soft robotics advocates using principles imported from more conventional rigid robot designs to work with pliable materials in a wide range of applications, some of which tie in with the growth in 3D printing. The people working in this area are developing applications for everything from physical therapy to minimally invasive surgery, with energizing inputs from organic chemistry and soft materials science. If the average robot is modeled around metallic structures with joints based on conventional bearings, soft robotics looks to the natural world for models of locomotion through terrain and innovative methods of energy production.

Peck and Shepherd are proposing what they call a ‘soft-robotic rover with electromagnetic power scavenging,’ a device capable of moving in the seas of Europa that is anything but the submarine-like craft some have envisioned to do the job. The closest analog in the natural world is the lamprey eel, the soft robotics version of which would use electrodynamic tethers to scavenge energy. The rover moves by swimming, powered not by solar or nuclear power but by the use of expanding gases. The rover under the ice sends data to a Europa orbiter using VLF wavelengths, like a submarine. Let me quote from the NIAC proposal on this mechanism:

The electrical energy scavenged from the environment powers all rover subsystems, including one that electrolyzes H2O. Electrolysis produces a mixture of H2 and O2 gas, which is stored internally in the body and limbs of this rover. Igniting this gas expands these internal chambers, causing shape change to propel the rover through fluid or perhaps along the surface of a planetary body.

Power Beneath the Ice

This is the first time I have encountered locomotion based on electromagnetic power scavenging, with accompanying reliance on soft robotic structures that could change the way we look at designing probes that will operate in ocean environments like that on Europa. It’s interesting to take this one step further, as the proposal itself notes, and remember that a rover inspired by biology may here point toward astrobiology, in that electromagnetic energy is considered to be a possible source of energy for any native life under Europa’s ice. 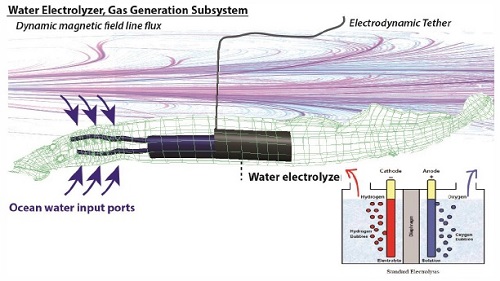 We know from experience in Earth orbit that tethers work, a result of the fact that a conductor moving through a magnetic field experiences an induced current. The power available at Jupiter gives us interesting options:

In Jupiter’s orbit, where the magnetic field can be up to 10,000 times more powerful and the ionosphere denser than Earth’s, the power can be even higher. A NASA/MSFC study characterized the power available for an EDT [electrodynamic tether] near Jupiter. The authors report that at least 1W would be available in Europa’s orbit but did not consider the much higher conductivity of the ocean or whatever tenuous atmosphere may exist near the surface.

Because higher conductivity produces greater current, the authors argue that far more power should be available on Europa, and that tethers no more than meters long should be sufficient to power the rover. According to the NIAC proposal, one end of the tether would be attached to the rover’s power systems while the other would be kept above the rover by a gas-filled balloon to maintain the necessary configuration as the rover conducted operations, and to ensure a predictable level of current. The tether itself also serves as an antenna to relay science data (possibly through an umbilical) to the surface. The proposed Phase I study would investigate tether configurations and the ability of an EDT to produce the power for transmission.

So we have energy harvested (or scavenged) by electrodynamic tethers being used to power up an electrolyzer that can split water into gaseous H2 and O2, an efficient way to use local resources in a domain where solar and perhaps nuclear power would be unusable (remember in relation to nuclear options that NASA has cancelled development of the Advanced Stirling Radioisotope Generator – ASRG – technologies, although some testing at NASA Glenn is to continue). The gases produced by the electrolysis would then be stored for energy usage, tapped as a combustible fuel/oxidizer mixture, and as a pressurant.

A Natural Model for Locomotion

This last point deserves a second look. In previous work, Robert Shepherd has created pneumatically powered silicon-based robots that can move and navigate obstacles, using onboard air compressors and lithium battery packs. Work at MIT has demonstrated a pneumatically powered swimming robot with a soft tail using onboard compressed CO2. Shepherd has also demonstrated the use of hydrogen combustion to increase the range and speed of soft robots, a model he and Peck propose for further study in the Europa concept, one that might be used both below the ice and on the surface. 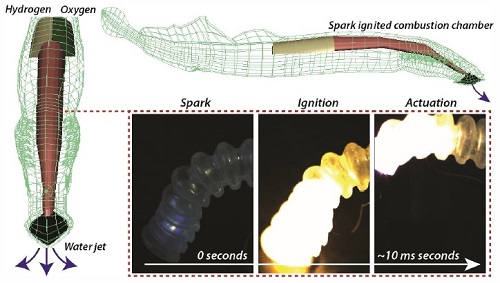 Here again the model from nature is instructive, for as the report notes, “[t]he design of the combustion powered hydro-jetting mechanism is analogous to the morphology of an octopus’ mantle cavity.” The report anticipates using jetting methods to allow the rover to range widely at long distances and also for precision operations over short distances. Peck and Shepherd are also hoping to study grasping operations that would be modeled on biology, using ‘an array of teeth-like grippers positioned around the water jet area (mouth) of the synthetic lamprey.’

This is fascinating work that offers us solutions for powering an underwater robot but also provides mechanisms for movement in this environment (one that we may find in other gas giant moons) through the use of a form of robotics that mimics the natural world. Solutions inspired by biology help us move beyond the use of solar arrays, nuclear power or batteries to keep our rover operational and to give it what would seem to be a robust and lengthy lifetime. I would say that getting soft robotics into the picture for future space operations is a very wise idea, certainly one that justifies continued study and investment as we look toward the outer planets.