A Laser ‘Comb’ for Exoplanet Work

It’s been years since I’ve written about laser frequency comb (LFC) technology, and recent work out of the Max Planck Institute of Quantum Optics, the Kiepenheuer Institute for Solar Physics and the University Observatory Munich tells me it’s time to revisit the topic. At stake here are ways to fine-tune the spectral analysis of starlight to an unprecedented degree, obviously a significant issue when you’re dealing with radial velocity readings of stars that are as tiny as those we use to find exoplanets.

Remember what’s happening in radial velocity work. A star moves slightly when it is orbited by a planet, a tiny change in speed that can be traced by studying the Doppler shift of the incoming starlight. That light appears blue-shifted as the star moves, however slightly, towards us, while shifting to the red as it moves away. The calibration techniques announced in the team’s paper show us that it’s possible to measure a change of speed of roughly 3 cm/s with their methods, whereas with conventional calibration techniques, the best measurement is roughly 1 m/s (although see the citations below for HARPS calibration of an LFC that reaches 2.5 cm/s). Detecting an Earth-mass planet in an Earth-like orbit around a solar-type star involves observing velocity changes of 10 cm/s or less, so we’re clearly entering the right range here.

Let’s back up and consider how a laser frequency comb works. Below is an image from the European Southern Observatory explaining the ‘comb’ analogy — as you can see, the graph resembles a fine-toothed comb, one built around short, equally spaced pulses of light created by a laser. The different colors of the pulsed laser light are separated based on their individual frequencies. Combining an ultrafast laser as a calibration tool with an external source of light allows scientists to measure the frequency of the external light to a high degree of precision. 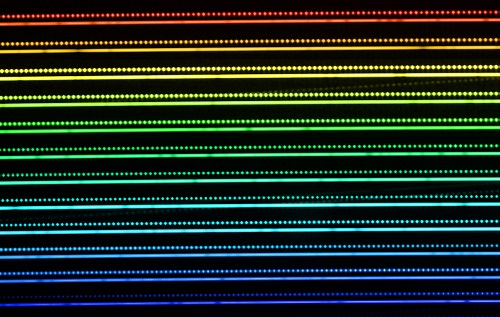 Image: This picture illustrates part of a spectrum of a star obtained using the HARPS instrument on the ESO 3.6-metre telescope at the La Silla Observatory in Chile. The lines are the light from the star spread out in great detail into its component colours. The dark gaps in the lines are absorption features from different elements in the star. The regularly spaced bright spots just above the lines are the spectrum of the laser frequency comb that is used for comparison. The very stable nature and regular spacing of the frequency comb make it an ideal comparison, allowing the detection of minute shifts in the star’s spectrum that are induced by the motion of orbiting planets. Note that in this image, the colour range is for illustrative purposes only, as the real changes are much more subtle. Credit: ESO.

The laser frequency comb is, then, a standard ‘ruler’ that can measure the frequency of light to extreme precision. In the case of the recently announced findings, the researchers worked with sunlight averaged over the complete solar disk, as captured by the ChroTel solar telescope (located at the Vacuum Tower Telescope installation in Tenerife, Canary Islands). They combined this light with the light from the laser frequency comb, injecting both into a single optical fiber. The result was sent on to a spectrograph for analysis, with striking results. Lead author Rafael Probst (Max Planck Institute of Quantum Optics) comments:

Probst goes on to say that although the technique is currently restricted to solar spectroscopy, it should be workable even for faint astronomical targets as it is perfected. He comments in this news release from the Institute of Physics that a key aspect of the work is the clean and stable beam at the output that results from using single-mode fiber, a kind of fiber common in laser applications but relatively little used thus far in astronomy. The LFC at the Vacuum Tower Telescope is the first installation for astronomical use based on single-mode fiber.

These refinements of laser frequency comb technique point toward future measurements of Doppler shifts that will make detecting Earth-sized planets with radial velocity methods more likely. The laser frequency comb seems poised to become a major tool. “In astronomy, frequency combs are still a novelty and non-standard equipment at observatories,” the authors write in their conclusion. “This however, is about to change, and LFC-assisted spectroscopy is envisioned to have a flourishing future in astronomy.”