Strategies for Life on Titan

Back in September of 1961, Isaac Asimov penned an essay in Fantasy & Science Fiction under the title “Not As We Know It,” from which this startling passage:

…when we go out into space there may be more to meet us than we expect. I would look forward not only to our extra-terrestrial brothers who share life-as-we-know-it. I would hope also for an occasional cousin among the life-not-as-we-know-it possibilities.

In fact, I think we ought to prefer our cousins. Competition may be keen, even overkeen, with our brothers, for we may well grasp at one another’s planets; but there need only be friendship with our hot-world and cold-world cousins, for we dovetail neatly. Each stellar system might pleasantly support all the varieties, each on its own planet, and each planet useless to and undesired by any other variety.

Asimov’s idea, prompted by a monster movie excursion with his children, was to look at realistic ways that life much different from our own could emerge. Here he anticipated our discussions of habitable zones and just what they imply, for we usually speak of a world being habitable if liquid water can exist on its surface. Asimov would have none of that because he wanted to know what kind of life might emerge in the hottest and coldest places in the Solar System. Reprints of the essay inspired James Stevenson, a graduate student at Cornell University, whose recent work on the astrobiological possibilities on Titan has energized wide discussion.

Image: Are there ways life could emerge on Titan? A panorama of the shoreline where Huygens touched down, stitched from DISR Side-Looking and Medium-Resolution Imager Raw Data. Image credit: ESA / NASA / JPL / University of Arizona / Rene Pascal (panorama).

Collaborating at Cornell with astronomer Jonathan Lunine and chemical engineer Paulette Clancy, Stevenson went to work on a cell membrane that could function in a cold and methane-rich environment. Clancy specializes in chemical molecular dynamics, while Lunine’s background includes working on the Cassini mission. With non-aqueous life on the table (Lunine had received a grant from the Templeton Foundation to study the possibilities), Clancy’s expertise seemed made to order. She comments on the work in this Cornell news release:

“We’re not biologists, and we’re not astronomers, but we had the right tools. Perhaps it helped, because we didn’t come in with any preconceptions about what should be in a membrane and what shouldn’t. We just worked with the compounds that we knew were there and asked, ‘If this was your palette, what can you make out of that?’”

It’s an interesting palette in a very interesting place. Liquid methane is the only liquid other than water that forms seas on the surface of a planetary body in the Solar System. The paper also notes the intriguing fact that there is an unknown process at work on Titan’s surface that consumes hydrogen, acetylene and ethane — these reach the surface out of the atmosphere but do not accumulate. Finding a cell membrane mechanism for Titan’s methane seas becomes an exercise in astrobiology that we can hope one day to weigh against data from the surface.

Using molecular simulation strategies given the challenges of cryogenic experimentation, the researchers screened for the best candidates for self assembly into membrane-like structures. The result: A cell membrane the researchers call an azotosome, made out of nitrogen, carbon and hydrogen molecules already known to exist in Titan’s frigid seas. If Earth life is built around the phospholipid bilayer membrane — water-based vesicles made from this are known as liposomes — then a methane-based membrane like the azotosome could be the Titanian analog, a flexible and stable cell membrane able to function at temperatures of -180 °C. From the paper: 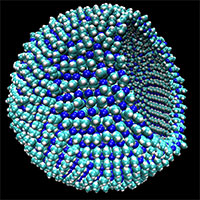 In a cold world without oxygen, we suggest that the vesicles needed for compartmentalization, a key requirement for life, would be very different to those found on Earth. Rather than long-chain nonpolar molecules that form the prototypical terrestrial membrane in aqueous solution, we find membranes that form in liquid methane at cryogenic temperatures do so from the attraction between polar heads of short-chain molecules that are rich in nitrogen. We have termed such a membrane an azotosome. We find that the flexibility of such membranes is roughly the same as those of membranes formed in aqueous solutions. Despite the huge difference in temperatures between cryogenic azotosomes and room temperature terrestrial liposomes, which would make almost any molecular structure rigid, they exhibit surprisingly and excitingly similar responses to mechanical stress.

Image: A representation of a 9-nanometer azotosome, about the size of a virus, with a piece of the membrane cut away to show the hollow interior. Credit: James Stevenson.

Could such membranes form on Saturn’s largest moon? We already know that a liquid organic compound called acrylonitrile can be found in the atmosphere there, and the researchers believe that an acrylonitrile azotosome compound would offer indigenous life the same kind of stability and flexibility that phospholipid membranes bring to life on Earth. Studying the metabolism and reproduction of the hypothesized cells is the next order of business, but Lunine talks of one day going well beyond theory to float a probe on Titan’s seas to sample its organics directly.

None of this demonstrates that life is present on Titan, but focusing on the availability of molecules that can form cell membranes helps us understand the kind of chemistries we need to look for under cryogenic conditions. In their conclusion, the authors talk about the ‘liquid methane habitable zone,’ a wonderful reminder of how our views on astrobiology are expanding.