Planet in a Quadruple Star System

Planets in multiple star systems intrigue us particularly when we try to imagine the view from the surface. Call it the ‘Tatooine Effect,’ made to order for visual effects specialists and cinematographers. But planets like these also raise interesting issues. Lewis Roberts (JPL) and colleagues have just published a new study of the 30 Ari system, demonstrating that it is a quadruple star system with a gas giant of about four times the mass of Jupiter in a 335 day orbit around its primary star.

We already knew about the planet in the 30 Ari system. What’s new is the discovery of the additional star. At 23 AU from the planet, the newly discovered fourth star would seem to be a factor in the orbital dynamics of the gas giant, but just what effects it has remain to be studied. The paper, which also reports the detection of a stellar companion to the exoplanet host system HD 2638, notes that 30 Ari is the second quadruple system known to host an exoplanet. And interestingly, both HD 2638 BC and 30 Ari BC have projected separations of less than 30 AU, so that the stellar companions may play a key role in the evolution of the exoplanets’ orbits. 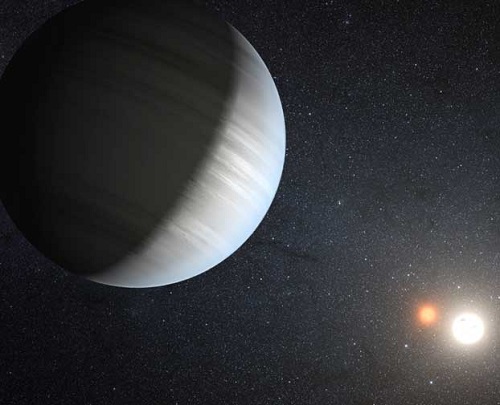 Image: A gas giant orbiting a binary star. How planets interact with their primary and other stars in multiple-star systems like these is a question that will demand orbital computations over a long span of observation. Credit: NASA, E. Schwamb.

According to this news release from the University of Hawaii’s Institute for Astronomy, the view from the surface of the 30 Ari planet (or, let’s say, a moon around it) would involve the primary star and two other stars bright enough to be visible in daylight. One of the bright ‘stars’ would actually be a binary system if examined in a telescope. The other known planet in a quadruple system is Ph1b in a system designated KIC 4862625, from which a different view would emerge. Ph1b is on a circumbinary orbit, a giant planet of between 20 and 55 Earth masses orbiting an eclipsing binary made up of a G- and an M-class dwarf, with a second binary star at a distance of 1000 AU.

While quadruple star systems are somewhat unusual (Andrei Tokovinin of the Cerro Tololo Inter-American Observatory in Chile.estimates that about four percent of solar-type stars are in quadruple configurations), the scant number of planets we’ve found in such systems may be the result of how we observe. The Roberts paper, published in The Astronomical Journal makes the point, and notes the inherent observational difficulties:

Known close visual binaries are traditionally excluded from radial-velocity (RV) exoplanet programs because the presence of a visual companion degrades the RV precision. This intrinsic bias complicates statistical inferences about exoplanets in binaries. Moreover, a faint visual companion that is itself a close spectroscopic binary pair can produce periodic low-amplitude RV modulation in the combined light that can be mistaken for an exoplanet. False positive exoplanet detections caused by unrecognized hierarchical multiplicity of their hosts may reach 1–2% (Tokovinin 2014b) of the total exoplanet sample. This is yet another reason to observe exo-hosts with high angular resolution and deep dynamical range.

But despite their difficulties, the fact that exoplanets and the stars they orbit have a common origin means that the more we learn about the multiple star system in question, the more we learn about the exoplanet as well. Just what effects do multiple stars in their various configurations have on the planets around them? One possibility is that gravitational nudges from these nearby stars may affect the protoplanetary disk, producing massive planets on eccentric orbits as the disk is disrupted. To learn more, we need to increase the number of observed binary systems, especially those where the binary separation is small.

Thus far the pattern that has emerged is that the frequency of exoplanets among single stars is roughly the same as that around the components of wide binaries, the latter defined as those having a semimajor axis greater than 100 AU. The evidence suggests that wider binaries have little impact on exoplanet orbital dynamics. But when we get to binaries with separations of less than 100 AU, we find fewer exoplanets but in general more massive ones. No planet has yet been detected in a stellar binary with a separation of less than 10 AU. It’s worth keeping in mind that Centauri A and B, our nearest neighbors, close to within 11 AU at their closest approach.

Looking around for fictional descriptions of multiple star systems as viewed from one of their planets, I come back to a book I mentioned not long after this site began, Stanton A. Coblentz’s Under the Triple Suns (Fantasy Press, 1955). Here’s what Coblentz imagined some sixty years ago, a bit of fun to end this post: 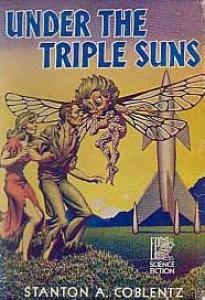 The red sun glowed high in the copper heavens. It was as wide as a dozen moons, and of the color and brightness of smoldering embers; and it did not end sharply as a disk should, but terminated in a nebulous crimson fringe. It shed its rays like a dying fire over a great sweep of wooded, partly hilly country, terminated in the distance by saw-toothed mountains, and marked at closer range by the loop of a cascading river and the oval of a lake, and by a cluster of shimmering beehive structures that billowed and fluttered in the breeze.

After a time, above the serrate edges of the far-off ranges, a white illumination began to spread; and the mist-banks about the peaks, ruddy before, took on a sheet-like glare as a globe that seemed of a hand’s width slowly swam into sight. Although much smaller than the red sun, it dominated the scene by its intense hot flame.

The white orb was about fifteen degrees above the horizon when another light began to emerge. Of an almost unbearable brilliance, it looked not much larger than a silver dollar; but its companions seemed almost pale beside its terrible sea-blue incandescence. Evidently the blue sun and the white belonged together, like the earth and the moon; and the three luminaries, along with a Saturn-like ringed fourth that had no fire of its own but glowed red, white or blue according to the influence of the moment, circled with a gradual movement from west to east.