Not long ago we looked at the discovery of what appears to be a disk orbiting the huge gas giant J1407b (see Enormous Ring System Hints of Exomoons). The example of Saturn is one thing that makes us wonder whether rings might exist around exoplanets, but of course in our own Solar System we also have Jupiter, Uranus and Neptune as hosts of ring systems of different sizes. In the case of J1407b, we’re not strictly sure that the object is a planet. If it’s actually a brown dwarf, we might be observing a protoplanetary disk in a young system.

I’m not surprised when it comes to looking for ring systems around exoplanets that David Kipping (Harvard-Smithsonian Center for Astrophysics) should be in the mix. Working with Jorge Zuluaga (University of Antioquia) and two of their students, Kipping is co-author of a paper discussing how we might identify what are now being called ‘exorings.’ As illustrated in the figure below, an exoplanet’s transit signature is a key, taking advantage of the fact that a planet with a ring system will produce a longer, deeper transit than the same planet without any rings. 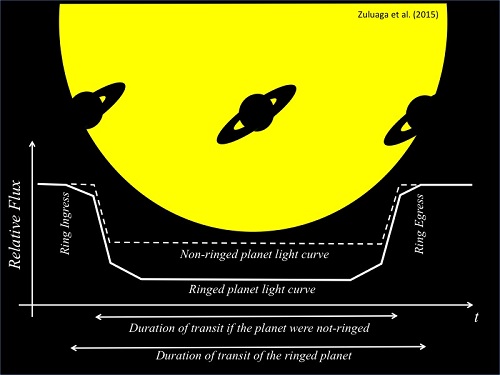 The trick here is to separate the effect of a larger planet seen in transit from a smaller world with a ring system. The paper explains that in transit studies, objects that appear larger than expected are often classed as false positives, a category that the authors think merits a careful look in case what is being rejected is actually a planet with a ring system. From the paper:

The transits of a Saturn-like ringed-planet are up to ∼3 times deeper than that expected for a spherical non-ringed one. These deep transits will be interpreted as produced by a planet ∼1.7 times larger. Additionally, if independent estimations of its mass were also available, the density of the planet will be underestimated by a factor of ∼5. Thus, instead of measuring Saturn’s density ∼0.7 g/cm3 , this planet would seem to have an anomalously low density of ∼0.14 g/cm3 . Even under more realistic orientations (cosiR ∼ 0.2) the observed radius will be ∼20% larger and the estimated density almost a half of the real one.

It is conceivable, then, that some ‘false-positive’ transits conceal a population of planets with rings.

An effect based on asterodensity profiling that the authors call the ‘photo-ring’ effect also comes into play. Here we examine the transit depth and its duration. The first is related to the size of the star, while the second depends on orbital velocity and the mass of the star. Out of this information we can estimate the star’s density, a result that can be compared with independent density calculations from methods like asteroseismology or the transits of other planetary companions to see if the results coincide. A discrepancy may be telling: The presence of rings around the transiting world, the authors argue, leads to an underestimation of stellar density. 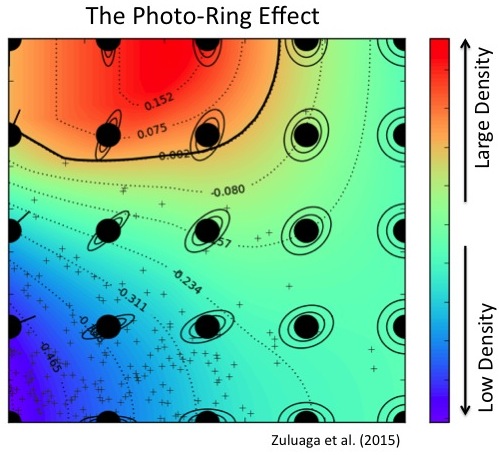 The strategies that emerge from this study are thus complementary. We can look for already confirmed transiting planets that appear to have anomalously low densities for further study. We can also reinvestigate our catalog of false-positives due to anomalously large transit depths to see if any of these could mask a ringed planet’s signature. Finally, we can search for transit signals that show the ‘photo-ring’ effect, looking for discrepancies in density calculations.

None of this implies that studying transit lightcurves itself does not remain significant:

We stress that the method presented here is complementary to the methods developed to discover exorings through detailed light curve modelling (Barnes & Fortney 2004; Ohta et al. 2009; Tusnski & Valio 2011). As explained earlier, the role of these methods will be very important once a suitable list of potential exoring candidates [is] found. It is, however, also important to note the great value of light curve models developed under the guiding principle of computational efficiency (semianalytical formulae, efficient numerical procedures, etc.), such as the basic models presented here.

We thus have a relatively straightforward technique for surveying our transiting planet catalogs for ringed-planet candidates, looking for that subset that can be subjected to more detailed lightcurve analysis. The paper is Zuluaga et al., “A Novel Method for Identifying Exoplanetary Rings,” accepted for publication at Astrophysical Journal Letters (preprint).

Next post: The Fermi Question: No Paradox At All