Hydrothermal Activity in the ‘Broken Heart’ of Enceladus

Enceladus has been a magnet for investigation since 2005, when the Cassini spacecraft began to reveal the unusual activity at the moon’s south pole, where we subsequently learned that geysers of water ice and vapor laden with salts and organic materials were spraying into space from deeply fractured terrain. Subsequent studies have homed in on what is now believed to be a 10-kilometer deep ocean beneath an ice shell 30 to 40 kilometers thick.

Now we learn that evidence for hydrothermal activity — water reacting with a rocky crust in a process that warms and saturates it with minerals — has been found on Enceladus, drawing on a four-year analysis of Cassini data. The new paper, published in Nature, is one of two just out that paint a gripping picture of active processes on the moon. It uses computer simulations and laboratory experiments to make sense out of Cassini’s early detection of silicon-rich rock particles flung into space by Enceladus’ geysers.

Researchers working on data from Cassini’s cosmic dust analyzer instrument believe the particles are grains of silica, found in sand and quartz on Earth, but it was the consistent size of the grains (6 to 9 nanometers) that helped them pin down the process responsible. Lead author Sean Hsu (University of Colorado at Boulder) and Cassini scientist Frank Postberg (Heidelberg University) collaborated with colleagues at the University of Tokyo, whose laboratory work explained the conditions needed to form silica grains of the same size as those detected by Cassini. The environment to produce them is thought to exist on the seafloor of Enceladus. 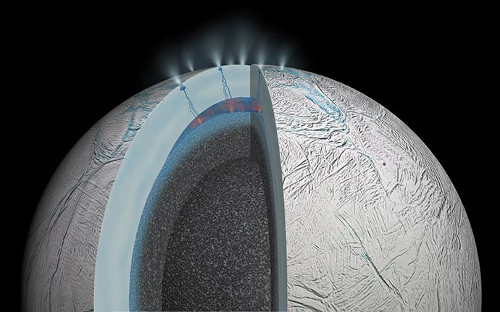 Image: This cutaway view of Saturn’s moon Enceladus is an artist’s rendering that depicts possible hydrothermal activity that may be taking place on and under the seafloor of the moon’s subsurface ocean, based on recently published results from NASA’s Cassini mission. Credit: NASA/JPL.

The process outlined in the paper works like this: Water should infuse the core of Enceladus, where gravity measurements by Cassini have already indicated the rock is porous. Water warmed in the interior, laden with dissolved minerals, interacts with colder water as it moves upward toward the geyser regions at the south poles, with silica crystallizing along the way. We learn something about conditions inside Enceladus here, for temperatures of at least 90 degrees Celsius would be required for the silica grains to be produced. A relatively quick transit is implied (no more than several years), accounting for the uniform size of the grains.

The hydrothermal activity displayed here is not dissimilar to what we find on Earth when silica-rich super-saturated water experiences a significant drop in temperature, and scientists are already talking about the possible astrobiological implications. John Grunsfeld, associate administrator of NASA’s Science Mission Directorate in Washington, puts it this way:

“These findings add to the possibility that Enceladus, which contains a subsurface ocean and displays remarkable geologic activity, could contain environments suitable for living organisms. The locations in our solar system where extreme environments occur in which life might exist may bring us closer to answering the question: are we alone in the Universe.”

Geophysical Research Letters is the source of the second paper, which looks at methane in the plumes emanating from Enceladus’ south pole, suggesting that it too is the likely result of hydrothermal activity. The French and American scientists involved in this work have discovered that clathrates forming under high pressure in the moon’s ocean could trap methane molecules inside water ice, an efficient process for depleting oceanic methane.

The hydrothermal explanation for the abundance of methane in the plume is that hydrothermal processes cause the ocean to become super-saturated with methane, so that the methane is being produced faster than it can be converted into clathrates. This solution fits well with the hydrothermal activity suggested by the grains of silica described in the Nature paper. Another possibility is that the clathrates release their methane as they are forced up into the plumes. Both of these processes may be occurring on Enceladus, but the work on silica grains gives weight to the hydrothermal explanation. 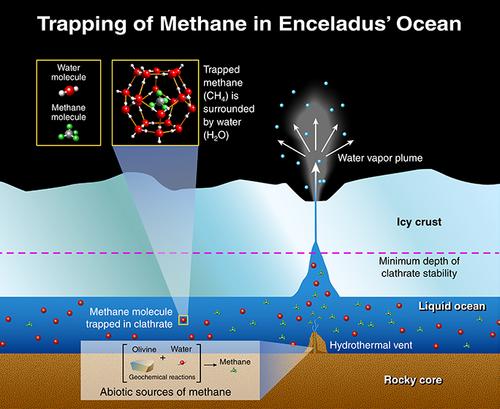 Image: This illustration depicts potential origins of methane found in the plume of gas and ice particles that sprays from Enceladus, based on research by scientists working with the Cassini Ion and Neutral Mass Spectrometer. Credit: NASA/JPL.

In a Scientific American essay called First Active Hydrothermal System Found Beyond Earth, Lee Billings points to the significance of these two papers in relation to astrobiology:

One of the leading theories for the origin of life on Earth postulates that it began in hydrothermal vents at the bottom of the ocean, where seawater percolating through hot rocks created energy- and nutrient-rich environments favoring the formation of the first cells. Today, Earth’s active hydrothermal vents are seafloor oases, harboring ecosystems that flourish in the darkness, isolated from the surface world. Find someplace else beyond Earth where hot rock and water intermingle, and even if it’s far from the sun life might flourish there, too. Such systems may have been common early in the solar system’s history, when rocky planets and icy moons were still relatively hot and wet from their initial formation. But until now scientists had no evidence of ongoing hydrothermal activity anywhere beyond Earth.

Hydrothermal activity within Enceladus tells us that there is a heat source here beyond radioactive materials at the core, probably the result of the moon’s orbit around Saturn and the heat generated by the resulting interactions. Billings points to another possible process: serpentinization, in which chemical reactions between water and rock generate heat, all occurring in a fractured, porous core. He adds: “Enceladus’s sizzling core may actually be a bit like a broken heart, kept alive by tidal forces continually pumping seawater through its fractured veins.” That passage alone should make you want to read all of Billings’ essay.