The Search for ‘Chaotic Earths’

As we get the next generation of space-based telescopes into operation, one of our more significant problems is going to be knowing where to look. After all, once we’ve identified potentially interesting planets for follow-up with spectroscopic analysis of their atmospheres, we’re still faced with the need to focus on the most likely targets. Telescope time is precious, and the ability to rule out planets so as to whittle down our list is a necessary skill to refine.

On that score, Rory Barnes (University of Washington) and colleagues have weighed in with a particular type of planetary configuration we may want to avoid. Barnes is interested in solar systems where gravity plays a significant role in disrupting what might otherwise be a circular orbit in the habitable zone. Some of these effects may be relatively small, but if. over time, we elongate the orbit of an otherwise habitable planet by these small interactions, we can all but eliminate its chances for life.

The particular focus here is mean motion resonances, which occur when two planets periodically reach the same positions in their orbit relative to one another. An example right here in our Solar System is Neptune and Pluto/Charon, where the former goes around the Sun three times for every two orbits of the latter. In cases like these, the orbital periods of the two planets are an integer ratio of each other, and the gravitational tug the resonance causes occurs each time the planets reach the same relative orbital position, an effect that grows with time.

But mean motion resonances (MMRs) are only half the story, for Barnes and team also examine mutual inclination. While the planets in our Solar System have a relatively low inclination (i.e., they are ‘coplanar,’ found on roughly the same plane around our Sun), we’ve found that exoplanets aren’t necessarily configured this way. We have many exoplanet systems with mean mutual resonances, and have found planets with a large inclination to each other. MMRs with inclined orbits have been studied in terms of how they form from the protoplanetary disk and through later gravitational scattering, but we’ll need further work to find out how common planets in mean mutual resonance with mutually inclined orbits really are, and what happens to them. 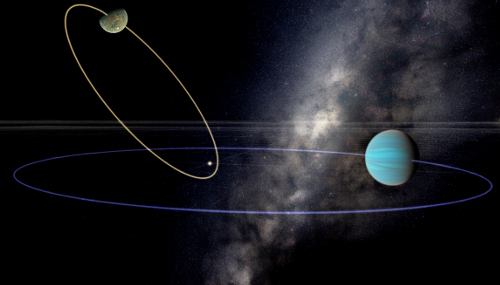 Image: A “chaotic Earth” could exist in a planetary system in which a neighboring planet has a “year” that is an integer multiple of another planet’s “year,” and if the orbital planes are not aligned. The affected planet’s orbit can become very elongated and can even flip all the way over, so that the two planets are revolving in opposite ways. These planets would have unpredictable climates, perhaps becoming inhospitable for millions of years at a time. Here, the potentially habitable planet is perturbed by a Neptune-mass planet on a three-year orbit and has an elongated orbit, which would make it relatively hot. As such it is mostly dry, but some seas remain, including one which contains the stellar glint, a feature astronomers will look for as it reveals the presence of surface liquids. Credit: Rory Barnes.

In the new paper, Barnes discusses computer simulations his team performed to simulate planetary systems with resonance and mutually inclined orbits. The results are not kind to the prospects for astrobiology, for dramatic orbital fluctuations can occur, including planets being pushed into near-collisions with the host star. The researchers demonstrate the characteristics of planets in inclined MMRs and also discuss four worlds known to be in MMRs but whose inclination is not known: HD 128311 and HD 73426 (2:1 resonance), HD 60532 (3:1) and HD 45364 (3:2). Inclined MMR systems are found to evolve chaotically for at least 10 billion years.

The authors liken what happens to planets in this configuration to a pendulum:

We have simulated the orbital evolution of exoplanets in mean motion resonances and inclinations and found the orbits can evolve chaotically for at least 10 Gyr. We hypothesize that these systems behave like compound pendula, which are naturally chaotic systems that can switch between modes of oscillation, as seen in our simulations… We find this chaotic motion over a range of mass ratios and for the 2:1, 3:2 and 3:1 resonance. We also tested different N-body codes using different integration schemes, and conclude the results are robust. Inclined MMRs can be produced by planet-planet scattering and the resultant systems are qualitatively similar to our simulations of known systems in an MMR.

We learn from these simulations that inclined MMR systems can produce planets in short-period orbits misaligned with the spin axis of the host star. We also learn that planets in mean mutual resonance may episodically go through periods of migration inward toward the star. The argument is that if we are looking for potentially habitable planets, we should consider that systems with MMRs and mutual inclination may be in a state of chaotic evolution where habitable conditions on a particular world will not be maintained long enough for life to emerge.

The results were something of a surprise for the researchers, as Barnes notes in this UWA news release:

“What happens when you have planets that are in this resonance and with mutual inclinations? … [W]hat we found was that things go all haywire. Those little perturbations that keep happening at the same point cause one of the orbits to do some crazy things — even flip over entirely — and then kind of come back to where it was before. It was pretty unexpected for us.”

These potential effects are all shown through simulation, as we have no examples of planets that are known to be in both mean mutual resonance as well as mutually inclined orbits. The authors believe the best way to detect such systems is through astrometric measurements, since identification through transits or radial velocity methods is difficult. The paper suggests that the European Space Agency’s Gaia instrument is the most likely to discover inclined MMRs through astrometry, offering us an observational test of these theories on chaotic orbital evolution.