The Colors of Extraterrestrial Life

One of these days we’ll have the instruments in place to examine light from a terrestrial-class world around another star. This opens up the possibility of identifying atmospheric gases like oxygen, ozone, carbon dioxide and methane. All of these can occur in an atmosphere in the absence of life, but if we find them existing simultaneously in great enough quantities, we will have detected a possible biosignature, for without life’s activity to replenish them, these gases would recombine and leave us with a much less tantalizing atmospheric mix.

But tackling planetary atmospheres for biosignatures is only one way to proceed. An interdisciplinary team led by Cornell University’s Lisa Kaltenegger and Siddharth Hegde (Max Planck Institute for Astronomy), is examining life detection based on the characteristic tint of lifeforms. An alien organism covering large parts of the planet — think forests, for example, on Earth — would reflect light at particular wavelengths, light that could be measured spectrally. 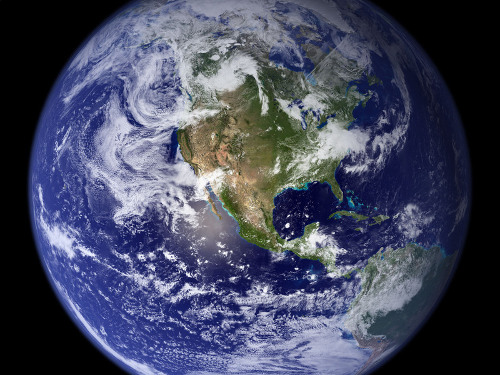 Image: In this composite satellite image from NASA, you can see a greenish tint in the reflected sunlight, a direct signature of plant life present on Earth’s surface. Similarly, if microbial life with a particular pigmentation covered larges swathes of an exoplanet’s surface, its presence could in principle be measured directly through its tint in reflected starlight viewed through our telescopes. Credit: NASA Earth Observatory.

The challenge, and thus the burden of preliminary work on this concept, is to figure out what spectral signatures different kinds of organism might throw. Working with colleagues at NASA Ames, the researchers have put together a catalog drawn from cultures of 137 different species of microorganisms, seeking a wide range of pigmentation in species occurring in environments as diverse as Chile’s Atacama desert, Hawaiian seawater, old woodwork found in a Missouri state park and hot springs in the Yellowstone National Park. Focusing on extremophiles — life pushed to its limits — allowed the team to investigate the widest possible range for physical and geo-chemical conditions on the surface of exoplanets.

The method, examined in a new paper in Proceedings of the National Academy of Sciences, is to measure the chemical ‘fingerprints’ of each microorganism culture and make the findings available in an online catalog. Reflectance spectra are produced at optical and near-infrared wavelengths and assembled in the first such collection dedicated to surface biosignatures. The catalog was designed to reflect as wide a range of life as possible, understanding that on our own planet, dominant species have undergone huge changes.

Although there is a considerable knowledge base of the spectral properties of land plants, very little information is present in the literature on the reflectance properties of microorganisms. Land plants are widespread on present-day Earth and are easily detected from high-resolution spacecraft observations. However, they occupy only a small niche in the environmental parameter space that brackets known terrestrial life. Additionally, land plants have been widespread on Earth for only about 460 My, whereas much of the history of life has been dominated by single-celled microbial life. Within the prokaryotic and eukaryotic microbes there is a far greater diversity of pigmentation than in land plants. For this reason, any hypotheses about extraterrestrial life based solely on land plants ignore much of the diversity of known life. 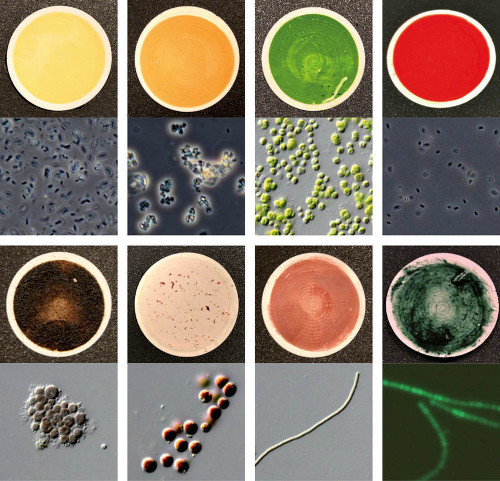 The single-celled microorganisms that have dominated Earth’s history have flourished for 3.5 billion years and probably longer, and have demonstrated again and again that they can be found in the most extreme conditions, from inside nuclear reactors (Chernobyl) to deserts and polar regions. Their particular pigmentation will depend upon local environmental conditions, and thus their future detection by space-based telescopes will tell us something about the environment on the planet they inhabit. The reflectance from surface lifeforms also plays into models for exoplanets that can be used to study chemical processes in their atmospheres.

This news release from the MPIA distills the team’s methods for measuring biosignatures, a task performed by Hegde working with Lynn Rothschild and other researchers from NASA Ames:

Hegde, [Ivan] Paulino-Lima and [Ryan] Kent measured the sample biosignatures at the Center for Spatial Technologies and Remote Sensing (CSTARS) at the University of California, Davis. They used a setup called an integrating sphere, which is hollow and lined on the inside with a reflective coating. The integrating sphere contained a hole for the light source, the microorganism sample, and a detector to measure the fingerprint in the reflected light from the sample. The effect of the sphere shape is as follows: when light shines through the hole and reflects off the sample, it is distributed evenly in all directions. Therefore, the detector can be placed anywhere in the sphere, against any part of the wall, and still measure the same averaged (“integrated”) fingerprint. This is important because for the foreseeable future, telescopes will only be able to measure reflected light from an exoplanet that has been averaged over the whole of the visible part of the planet’s surface.

Lisa Kaltenegger, who heads up Cornell’s Institute for Pale Blue Dots, points to the wide range of possible life including extremophiles that occurs in the database, saying that it “…gives us the first glimpse at what diverse worlds out there could look like… On Earth these are just niche environments, but on other worlds, these life forms might just have the right make to dominate, and now we have a database to know how we could spot that.” The database, which is open for the free use of researchers worldwide, is located at the Institute.

Further additions to the database are expected in the future as more samples become available to catalog microbial reflectance spectra. The paper is Hegde et al., “Surface biosignatures of exo-Earths: Remote detection of extraterrestrial life,” in Proceedings of the National Academy of Sciences, published online before print March 16, 2015 (abstract). The catalog is Surface biosignatures of exo-Earths, now available online.

Next post: Can We Find Exoplanets Using the Titius-Bode Relation?