Can We Find Exoplanets Using the Titius-Bode Relation?

The Titius-Bode law has always been a curiosity, one often attributed to little more than happenstance. But recently this numerological curiosity, which predicts that planets in a solar system appear with a certain ratio between their orbital periods, has been the subject of renewed investigation. Francois Graner (Ecole Normale Superieure, Paris) and Berengere Dubrulle (Observatoire Midi Pyrenees, Toulouse) revisited Titius-Bode in the 1990s, asking whether it actually flagged symmetry properties that most solar systems should exhibit.

And now continuing work out of Australian National University and the University of Copenhagen has made predictions using a modified version of the law that can be tested against observation of known exoplanetary systems. So we need to refresh our memory on the formulation, which shows us a relationship that predicts planetary orbits. Take a sequence where each number is double the number that preceded it. Thus 0, 3, 6, 12 and so on. Add 4 to each of these numbers, then divide the result by 10. If you examine our Solar System in terms of astronomical units (AU), the planets follow the sequence in many respects.

Enough so, at least, that the lack of a planet in what we now call the main asteroid belt led Johann Bode to suggest that a planet should appear at 2.8 AU between Mars and Jupiter, where the dwarf planet Ceres was subsequently found. The Titius-Bode formulation, developed in the 18th Century by Johann Titius and later discussed by Johann Elert Bode, had also received a boost in 1781 when the outer system planet it predicted at 19.6 AU was discovered at 19.2 AU (Uranus). Neptune, however, turned out to be 30.1 AU out instead of the Titius-Bode prediction of 38.8, while Pluto was found at 40 AU instead of 77.2.

Can some form of the Titius-Bode formulation still be useful to us in exoplanet work? Steffen Kjær Jacobsen (Niels Bohr Institute, Copenhagen) and fellow researchers Charles Lineweaver and Timothy Bovaird (the latter both at ANU) wondered whether a modified form of Titius-Bode might be of use in predicting exoplanet orbits. Developing work first presented in a 2013 paper on the subject, the authors believe the results can be applied to existing data. Says Jacobsen: 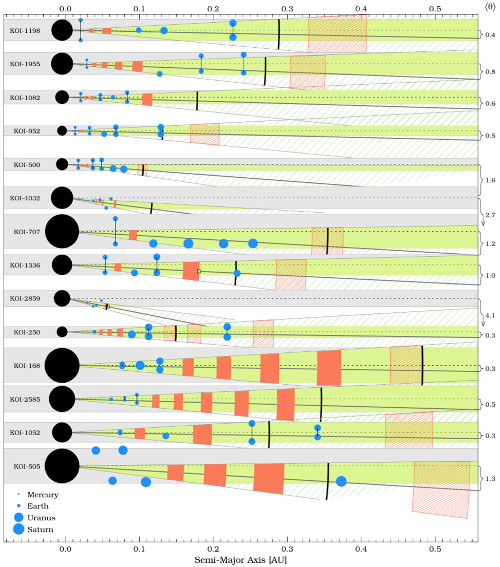 Image: Exoplanetary systems where the previously known planets are marked with blue dots, while the red dots show the planets predicted by the Titius-Bode law on the composition of planetary systems. 124 planetary systems in the survey – based on data from the Kepler satellite, fit with this formula. Credit: Timothy Bovaird et al., 2015.

In their paper in Monthly Notices of the Royal Astronomical Society, the team explains that they took the 27 planetary systems that did not fit the Titius-Bode requirements and added planets where Titius-Bode predicted they would be located. By adding planets between the already known planets, their work predicted a total of 228 planets in the 151 planetary systems. From this the team produced a priority list of 77 planets in 40 systems.

These are planets the researchers suggest should be searched for in the Kepler data, a chance to falsify the Titius-Bode predictions drawing on existing datasets. This work follows up co-authors Lineweaver and Bovaird’s previous investigation of Titius-Bode possibilities in exoplanets, which predicted in 2013 the existence of 141 new exoplanets in 68 systems. The following year Changcheng Huang and Gaspar Bakos performed a search of Kepler data for 97 of the planets thus predicted, resulting in the confirmation of five of them. The current paper tunes up the 2013 paper’s methodology, as discussed within:

In this paper, we perform an improved TB [Titius-Bode] analysis on a larger sample of Kepler multiple-planet systems to make new exoplanet orbital period predictions. We use the expected coplanarity of multiple-planet systems to estimate the most likely inclination of the invariable plane of each system. We then prioritize our original and new TB-based predictions according to their geometric probability of transiting. Comparison of our original predictions with the HB14 [the Huang/Bakos paper] confirmations shows that restricting our predictions to those with a high geometric probability to transit should increase the detection rate by a factor of ∼3.

If the Titius-Bode predictions were to hold up, from 1 to 3 habitable-zone planets should exist in each of the systems. The team ran an additional study of the 31 systems out of the 151 studied where planets have been found close to the habitable zone, finding there should be an average of two planets in the habitable zone. If the implications of Titius-Bode are broadly true, then the potential exists for billions of stars with planets in the habitable zone throughout the galaxy, a finding that subsequent analysis of Kepler data and future work may support.