Before I get into some NASA-funded exoplanet work that grew out of a study of the binary nature of Pluto and Charon, I want to mention that NASA TV will air an event of exoplanet interest on Tuesday the 7th, from 1700 to 1800 UTC. A panel of experts will be discussing the search for water and habitable planets, presenting recent discoveries of water and organics in our own system and relating them to the search for Earth-like worlds around other stars. NASA streaming video, along with schedules and other information, can be found here.

As to that Pluto/Charon work, it actually took Ben Bromley (University of Utah) and Scott Kenyon (Smithsonian Astrophysical Observatory) much deeper into space when they began relating it to the formation of planets in circumbinary orbits around binary stars. These are planets that orbit both stars rather than one of the two. In other words, the work, funded by NASA’s Outer Planets Program, has examined the familiar ‘Tatooine’ scenario from Star Wars, where a sunset view may consist of two stars approaching the horizon simultaneously, a scenario that for a long time was deemed impossible.

Bromley and Kenyon’s mathematical models show that binary stars orbited by planetesimals can produce Earth-class planets close enough to the stars to be in the habitable zone as long as they are in concentric, oval-shaped rather than circular orbits. Such orbits change our perspective about what can happen around binary stars. Says Bromley

“…planets, when they are small, will naturally seek these oval orbits and never start off on circular ones. … If the planetesimals are in an oval-shaped orbit instead of a circle, their orbits can be nested and they won’t bash into each other. They can find orbits where planets can form.”

“We are saying you can set the stage to make these things. It is just as easy to make an Earthlike planet around a binary star as it is around a single star like our sun. So we think that Tatooines may be common in the universe.” 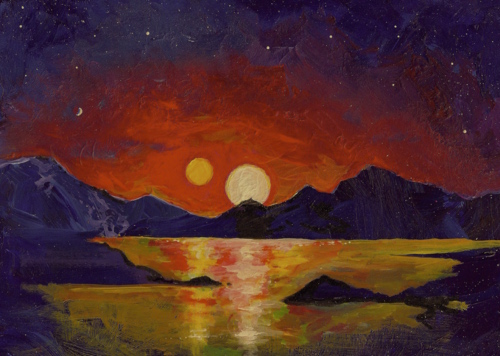 Image: In this acrylic painting, University of Utah astrophysicist Ben Bromley envisions the view of a double sunset from an uninhabited Earthlike planet orbiting a pair of binary stars. In a new study, Bromley and Scott Kenyon of the Smithsonian Astrophysical Observatory performed mathematical analysis and simulations showing that it is possible for a rocky planet to form around binary stars, like Luke Skywalker’s home planet Tatooine in the ‘Star Wars’ films. So far, NASA’s Kepler space telescope has found only gas-giant planets like Saturn or Neptune orbiting binary stars. Credit: Ben Bromley, University of Utah

The conclusion is hardly intuitive, for two stars hosting an infant planetary system in this configuration perturb the region around them. It has been assumed that their gravitational interactions will clear out orbits to distances between 2 and 5 times the binary separation, with random motions among the planetesimals becoming high and destructive collisions frequent. More gentle merges and nudges are thought to be necessary for the formation of planets.

We do have seven circumbinary planets in inner orbits that have been identified by the Kepler telescope, but all are gas giants of Neptune-size or larger. Prevailing theories have suggested that such planets — the first discovered was Kepler-16b, a Saturn-mass planet at an orbital distance of 0.7 AU orbiting a K-class star and an M-dwarf — formed much further out in their systems and migrated closer to the stars because of gravitational interactions with another planet or the disk of gas surrounding the binary pair.

That conclusion may still hold for the gas giants so far detected, but the paper looks at all the Kepler circumbinary planets in light of the authors’ modeling and argues that there are other solutions beyond migration, particularly for smaller worlds. From the paper:

Toward understanding how circumbinary planets form, we re-examine a fundamental issue, the nature of planetesimal orbits around binary stars… [W]e describe a family of nested, stable circumbinary orbits that have minimal radial excursions and never intersect. While they are not exactly circular, these orbits play the same role as circular paths in a Keplerian potential. Gas and particles can damp to these orbits as they dynamically cool, avoiding the destructive secular excitations reported in previous work. Thus planetesimals may grow in situ to full-fledged planets.

These stable, non-Keplerian orbits, which the authors call ‘most circular,’ do not cross. Objects in such orbits respond to the mass of the central binary but also ‘experience forced motion, driven by the binary’s time-varying potential.’ It is this perturbation that keeps the planet from maintaining a circular orbit. A ‘most circular’ orbit is defined here as ‘having the smallest radial excursion about some guiding center, orbiting at some constant radius Rg and angular speed Ωg in the plane of the binary.’

The result is that orbits inside a critical distance, pegged at twice the separation of the binary stars, are unstable, but beyond this distance, planet formation appears possible. After presenting their mathematical analysis, the authors go on to look at the Kepler circumbinary planets, finding that while in situ formation can produce rocky planets at the observed distances, this is unlikely to have occurred for the gas giants found by Kepler.

Most of the Kepler circumbinary planets seem to implicate migration of mass into the region where these objects are observed. Without larger samples of planets, it is impossible to distinguish between models where migration precedes assembly from those where migration follows assembly. All of the planets are too massive to allow in situ formation with no migration. However, the high free eccentricity observed in Kepler-34b and Kepler-413b are consistent with scattering events. Improved constraints on the orbits and bulk properties (mass, composition, spin, etc.) might allow more rigorous conclusions on their origin.

The argument here is not that migration cannot be a viable way to move planets into inner circumbinary orbits, but that both migration and in situ formation are possible. Outside of the critical region near the binary, planet formation can happen the same way it does around a single star, with planetesimal orbits allowing mergers, fragmentation and stirring of the material that will grow into stable worlds over time. In our own Solar System, the small moons of the Pluto/Charon binary may have formed in the same way.

We may not be seeing small, rocky worlds in inner circumbinary orbits that formed in situ because they are so much smaller than the gas giants thus far detected, but if the oval ‘most circular’ orbits the authors describe are indeed possible, we should start finding them. Migrating gas giants explain our current detections, in other words, but habitable rocky worlds in such systems should be able to form and remain stable in their original orbits.

The paper is Bromley and Kenyon, “Planet formation around binary stars: Tatooine made easy,” submitted to The Astrophysical Journal (preprint).

Next post: Migratory Jupiter: A Theory of Gas Giant Formation