An interesting model of planetary formation suggests that the architecture of our Solar System owes much to the effects of the giant planets as they migrated through the protoplanetary disk. Frédéric Masset (Universidad Nacional Autónoma de México) and colleagues go so far as to speculate that planetary embryos in orbits near Mars and the asteroid belt may have migrated outwards, depleting the region of materials that would become the cores of Jupiter and Saturn. The key is the heat an embryonic planet generates in the protoplanetary disk.

Writing in Nature, the authors describe computations that model what happens to the rocky cores that will become gas giants. Tidal forces affecting planets in the protoplanetary disk have been thought to cause them to lose angular momentum, making their orbits gradually decay. The migration in this case should be inwards toward the star. But the researchers’ model takes heat generated by material impacting onto the planetary embryos into account, a factor that may slow and can perhaps reverse migration. 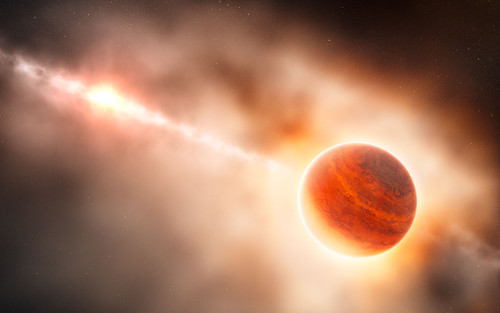 Image: An artist’s impression showing the formation of a gas giant planet in the ring of dust around a young star. The protoplanet is surrounded by a thick cloud of material so that, seen from this position, its star is almost invisible and red in colour because of the scattering of light from the dust. Credit: ESO/L. Calçada.

Remember that a gas giant is composed of a small rocky core surrounded by a huge envelope of gas. The ‘heating torque’ the authors describe works at high efficiency when the mass of the embryo — which will become the core — is between 0.5 and 3 Earth masses, a useful number because this is the mass range needed for such a core to develop into a Jupiter-class world once it has migrated outwards. Studying mass and density of the protoplanetary disk near the forming planet, the authors show that the embryo heats the disk near it, creating regions that are hotter and less dense than surrounding material.

This situation favours the lobe that appears behind the planet: its material approaches closer to the planet, receives more heat and is consequently less dense than the other lobe, leading to a positive torque on the planet… The heating torque therefore constitutes a robust trap against inward migration in any realistic disk, when accretion rates are large enough.

As for the depletion of material and its possible signs in the asteroid belt, the authors note that the heating torque they describe should be less efficient on the warm side of the ‘snow line’ (the distance from the star allowing water ice to form) because the opacity of the disk drops there. But planetary embryos that formed beyond where the snow line will eventually be should have experienced strong heating torque and thus outward migration, factors that should cause a depletion of solid material in the region. Jupiter’s rocky core may thus have formed within the region where the main asteroid belt is today before migration set in.

Estimates of the snow line in our Solar System range from 2.7 AU to 3.1 AU, while the main asteroid belt lies between 1.8 and 4.5 AU. By this theory, we can expect to find a similar depleted region inside the orbit of the first giant planet in many planetary systems.

These two behaviors may help to explain the correlation between giant planets and the heavy metal content (metallicity) of the host star. From the paper:

…since the heating torque scales with the accretion rate and the accretion rate, in turn, scales with the amount of solid content (a proxy of which is the metallicity), protoplanetary disks with larger metallicity will engender planets that can avoid inward migration and grow to become giant planets. In contrast, embryos born in lower-metallicity environments cannot avoid inward migration, leading to results as hitherto found in models of planetary population synthesis, with low yields of giant planets and ubiquitous super-Earths.

The authors note, though, that the relation of super-Earths to host star metallicity is still controversial, and add that they have not performed calculations on embryos forming at very small orbital distances, although heating torque in these regions would likely be high. To learn more about the consequences of heating torque will require more data on protoplanetary disks and the embryos moving within them. A mechanism that explains giant planet formation and associated migration would be a welcome addition to our toolkit for exoplanet research.

The paper is Benitez-Llambay et al., “Planet Heating Prevents Inward Migration of Planetary Cores,” Nature Vol. 520 (2 April 2015). Abstract available. For another take on our Solar System’s seemingly unusual architecture and what explains it, see Batygin and Laughlin, “Jupiter’s decisive role in the inner Solar System’s early evolution,” Proceedings of the National Academy of Sciences, published online February 11, 2015 (abstract). The latter is ably described by Lee Billings in Jupiter, Destroyer of Worlds, May Have Paved the Way for Earth.