Ganymede Bulge: Evidence for Its Ocean?

What to make of the latest news about Ganymede, which seems to have a bulge of considerable size on its equator? William McKinnon (Washington University, St. Louis) and Paul Schenk (Lunar and Planetary Institute) have been examining old images of the Jovian moon taken by the Voyager spacecraft back in the 1970s, along with later imagery from the Galileo mission, in the process of global mapping. The duo discovered the striking feature that Schenk described on March 20 at the 46th Lunar and Planetary Science Conference in Texas. Says McKinnon:

“We were basically very surprised. It’s like looking at old art or an old sculpture. We looked at old images of Ganymede taken by the Voyager spacecraft in the 1970s that had been completely overlooked, an enormous ice plateau, hundreds of miles across and a couple miles high… It’s like somebody came to you and said, ‘I have found a thousand mile wide plateau in Australia that was six miles high.’ You’d probably think they were out of their minds or spent too much time in the Outback.”

The bulge is about 600 kilometers across and 3 kilometers tall, and the researchers believe that it may be an indication of the moon’s sub-surface ocean. The going theory is that the bulge emerged at one of Ganymede’s poles and slid along the top of the ocean in a motion called true polar wander (TPW). The find sets us up for future mapping of Ganymede, for the polar wander theory leads McKinnon and Schenk to believe that a similar bulge should exist opposite this one. If current mission planning holds, we may learn the answer early in the 2030s. 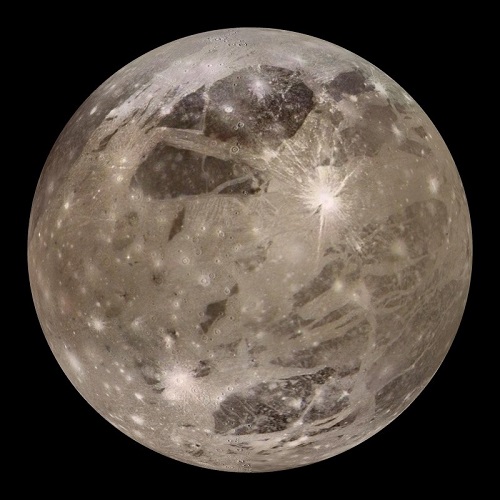 If it takes a global sub-surface ocean to produce true polar wander, then we should expect the same thing on Europa, and indeed, the evidence points to the phenomenon, though here the signs of TPW are much clearer presumably because the ice crust is thinner. Strain produced by the shell’s rotation forces concentric grooves — the researchers call them ‘crop circles’ — to emerge. McKinnon and Schenk found that the ‘two incomplete sets of concentric arcuate trough-like depressions’ previously identified on Europa are offset in a pattern that fits the stresses of true polar wander. Moreover, additional features show evidence of TPW, including fissure-like fractures and smaller subsidiary fractures that seem to be associated with the concentric features and their patterning on the surface. “The TPW deformation pattern on Europa,” the authors add, “is thus more complex than the original features reported.” Here again it will take future mapping to provide the higher resolution needed to explore these issues.

The bulge now identified on Ganymede indicates that at some point in the past, the moon’s surface ice rotated, with what had been thicker polar shell material now being found at the equator. McKinnon’s surprise at the finding is understandable given that there is no other surface sign of true polar wander on Ganymede, as the LPSC proceedings paper makes clear:

Extensive search of the entire Voyager and Galileo image library, including all terminator image sequences and all high resolution images reveals no trace of any of the features currently associated with TPW on Europa. No arcuate troughs, no irregular depressions, no raised plateaus, no crosscutting en-echelon fractures. This may be consistent with a thicker ice shell on Ganymede.

That thicker ice shell would have made true polar wander less likely, but the phenomenon could have occurred in the past over a thinner surface crust. The paper goes on:

A thicker ice shell (and lithosphere) will not deform as easily, and will resist polar wander in the first place; a thinner icy shell, more plausible in Ganymede’s past, may have undergone polar wander, but the resultant stresses will be lower by a factor of 3 compared with those on Europa and may not have created such a distinctive tectonic signature. We are engaged in a global search for other manifestations of TPW on Ganymede and will report on our findings.

The question, then, is how a bulge the size of the one the researchers have identified on Ganymede can still be in place. In an article on this work in National Geographic (Bizarre Bulge Found on Ganymede, Solar System’s Largest Moon), McKinnon had this to say:

“Any ideas about how you support a three-kilometer-high [two-mile] ice bulge, hundreds of kilometers wide, over the long term on Ganymede are welcome… We’ve never seen anything like it before; we don’t know what it is.”

As we’ve seen recently, Ganymede’s sub-surface ocean has been confirmed by Joachim Saur and colleagues (University of Cologne) through the study of auroral activity (see Evidence Mounts for Ganymede’s Ocean). Now we have further indication that crustal slippage has occurred on the moon, all but requiring an ocean separating surface materials from the deeper core. We can expect to learn much more, including whether or not there is a corresponding bulge opposite to this one, when the Jupiter Icy Moon Explorer mission arrives in 2030. If the proposed timeline is met, JUICE will begin orbital operations around Ganymede in 2033.