Voyager to a Star? 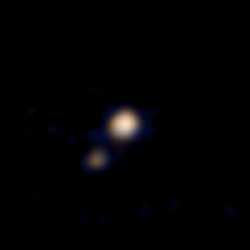 The latest imagery from New Horizons has me wondering what it must be like to be on the team for this mission. Although released a week ago, the photo at left was taken by the Ralph color imager aboard the spacecraft on April 9. The distance from Pluto and Charon in the shot is about 115 million kilometers. This is the first color image ever made of Pluto/Charon by an approaching spacecraft, one that gives us a sense of what lies ahead as the distance continues to diminish. Imagine being part of this long effort and seeing a new world and its system of moons swimming into focus, unveiling landscapes never before seen.

New Horizons takes me back to the Voyager days, and in the context of the approach to Pluto/Charon, the publication of Jim Bell’s The Interstellar Age (Dutton, 2015) is truly apropos (I’m sure the publishers had exactly this in mind). Subtitled “Inside the Forty-Year Voyager Mission,” the book lets us glimpse what it was like inside JPL when the planetary encounters occurred. Bell, now president of the Planetary Society’s board of directors, was caught up in Voyager as a young grad student at Caltech, a formative experience in his career as a planetary scientist. In describing new planets coming for the first time into detailed view, he turns to the words of an old friend:

“The sense of exploration we get with these missions is a very ‘human explorer’ kind of feeling, even though our senses are on the distant spacecraft,” my friend, planetary science colleague, and Voyager imaging team member Heidi Hammel says. “I feel like an old-fashioned mountain climber when I am making discoveries, seeing something for the first time, realizing that no human before me has ever seen what I am seeing. It takes your breath away— for just a moment you feel a pause in time as you know you are crossing a boundary into a new realm of knowledge. And then you plunge in, and you are filled with childlike joy and wonder and delight.”

Hammel goes on to say that you have to temporarily shelve that feeling if you’re a scientist working on the mission, at least while an active encounter is going on. But the wonder of the event is something you always have with you, and it’s something a good scientist wants to share. It’s interesting in the New Horizons context that Bell talks about Jon Lomberg’s One Earth: New Horizons Message project. What Lomberg has in mind for New Horizons, you’ll recall, is an uploaded message, a Voyager ‘Golden Record’ sent digitally into the spacecraft’s computer memory after its Solar System work is done (see New Horizons Message Update].

Could we do something like this for the Voyagers? It’s an intriguing notion. Lomberg pointed out to Bell that while the Golden Record will always be a part of Voyager, there is nothing on the spacecraft that tells of its remarkable passage through our Solar System, something that says ‘here’s what Voyager was and here’s what Voyager found.’ Bell would like to see us upload some of these historic photos. Imagine: The volcanoes of Io, the spectacular cliffs of Miranda, the bizarre cantaloupe terrain of Triton, all could be used to create what he calls an ‘electronic postcard’ that will complete the Voyager story for any future intelligence that finds them.

And is a trajectory change a possibility? This is interesting stuff. Right now, the Voyagers will take about 30,000 years to reach the outer edge of the Oort Cloud (the inner edge, according to current estimates, is maybe 300 years away). Add another 10,000 years and Voyager 1 passes some 100,000 AU past the red dwarf Gliese 445, which happens to be moving toward the Sun and will, by this remote date, be one of the closest stars to the Solar System.

As to Voyager 2, it will pass 111,000 AU from Ross 248 in roughly the same time-frame, at which point the red dwarf will actually be the closest star to the Sun. According to Bell, Carl Sagan and the team working on the Golden Record wondered whether something could be done about the fact that neither Voyager was headed for the interior of another Solar System. Is it possible that toward the end of the Voyagers’ active lifetimes (somewhere in the 2020s), we could set up a trajectory change that would eventually lead Voyager to a star?

The idea comes out of Sagan’s Murmurs of Earth (Random House, 1978), which Bell quotes as he describes the concept:

Both [Sagan and the Golden Record team] and I wonder if it might be possible to command one final “empty-the-tank” thruster firing, just before final communication with each Voyager is lost, to “redirect the spacecraft as closely as possible so that they will make a true encounter [with these stars]. If such a maneuver can be affected then some 60,000 years from now one or two tiny hurtling messengers from the strange distant planet Earth may penetrate into their planetary systems.” If no one else does, I will try to remember to make this request to Suzy Dodd or whoever is running the Voyager Project in a decade or so, as the spacecraft power levels wind down. We have the fuel. Feel free to mention it to your congressperson. 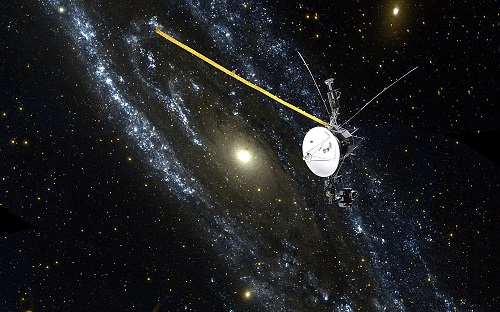 A trajectory change would increase only infinitesimally the faint chance that one of these spacecraft would someday be intercepted by another intelligent civilization, but the message of this maneuver is really to us. There is a certain magic in the idea that these venerable machines might one day be warmed by the light of another sun. In any event, I’m much in favor of Pioneer plaques, Golden Records, and One Earth Messages, as they remind us that our spacecraft are our emissaries as well as our scientific tools. How we conceive of them through the information they carry helps us gain perspective on ourselves, and shapes the context of all our future explorations. If we can do it, I’m all for giving the Voyagers one last, hard nudge into the unknown.