The Nexus for Exoplanet System Science, or NExSS, is a collaborative initiative from NASA to draw on the collective talent of researchers from ten universities, three NASA centers and two research institutes. Conceived as a ‘virtual institute,’ the effort is both geographically diverse and multidisciplinary in nature, focusing not only on the search for exoplanets but the attempt to analyze planetary environments and find life. Jim Green, NASA’s Director of Planetary Science, explains the concept:

“This interdisciplinary endeavor connects top research teams and provides a synthesized approach in the search for planets with the greatest potential for signs of life. The hunt for exoplanets is not only a priority for astronomers, it’s of keen interest to planetary and climate scientists as well.”

NExSS draws on the collective expertise of its participants in the areas of Earth science, planetary science within our Solar System, heliophysics and astrophysics to create what NASA is calling a ‘system science’ approach aimed at advancing the search for life on exoplanets. The effort will be led by Natalie Batalha of NASA’s Ames Research Center, Dawn Gelino with NExScI, the NASA Exoplanet Science Institute, and Anthony del Genio of NASA’s Goddard Institute for Space Studies. This NASA news release gives a brief summary of the different teams, selected from proposals submitted to the agency, and the subject of their work. 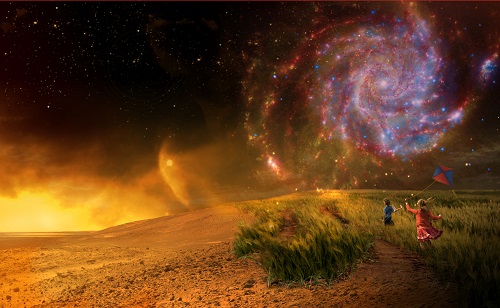 Image: The search for life beyond our solar system requires cooperation across scientific disciplines — the way the UW-based Virtual Planetary Laboratory has been working since 2001. Now, NASA’s NExSS collaboration will take a similarly interdisciplinary approach to the search for life. Participants include those who study Earth as a life-bearing planet (lower right), those researching the diversity of solar system planets (left), and those on the new frontier, discovering worlds orbiting other stars in the galaxy (upper right). Credit: NASA.

Sixteen projects in all have been funded through NExSS, and while I won’t try to go through all of them today, I do want to look at two a little more closely. At UC Berkeley, James Graham is leading a project that will include researchers at Stanford University. The collaboration, says Graham, draws together three different approaches to exoplanet hunting:

The goal of the Berkeley project is to study the three methods and their overlap, using not only the Gemini South instrument but also the Keck Observatories in Hawaii and, when it becomes available, the Thirty Meter Telescope planned for a site next to Keck on Mauna Kea. “It is a wonderful confluence of multiple approaches to planet-hunting that allows us to detect planets that are both near and far from the host star,” adds Marcy, a reference to the Gemini Planet Imager’s ability to find worlds in much more distant orbits than transit or Doppler methods. UC-Berkeley’s news release is here.

At the SETI Institute, researcher Hiroshi Imanaka, a specialist in the chemistry of planetary atmospheres, is part of another team selected by NExSS out of the pool of proposals. Imanaka’s focus is on habitable zones, as he explains in this SETI Institute news release:

“One major thrust of the exoplanet community has been to find worlds orbiting in the so-called habitable zone. That’s the range of distances from a star where a planet could have temperatures permitting liquid oceans. However, liquid oceans are not the only condition under which life can exist. Some of the moons of Jupiter and Saturn are examples of places that are not in the conventional habitable zone, but might be nonetheless habitable. We want to take further steps to characterize habitable environments that lie beyond the solar system.”

In keeping with the wide-range encouraged by NExSS, Imanaka’s work draws on planetary science and astrobiology to study Titan in light of the clues it can provide about planets detected by teams like those at UC-Berkeley. His team is made up of Titan specialists who study the moon’s thick, smoggy atmosphere and exotic ethane seas. Whether or not Titan has life today, Imanaka considers it a ‘pre-biotic’ world that is producing the most complex organic compounds we know of outside Earth. The team hopes to tap the expertise of the NExSS network as it considers how conditions on Titan can inform our study of smoggy exoplanet atmospheres.

I’ll turn you back to the NASA news release for a breakdown of the other projects, which include Debra Fischer’s team at Yale working on spectrometers of Earth-detecting precision for nearby stars, Drake Deming’s team at Yale using Kepler data to study exoplanet atmospheres, and Jason Wright’s Penn State team studying ‘hot Jupiter’ atmospheres with a high-precision technique called ‘diffuser assisted photometry.’ The news release offers links to each.

The formation of NExSS comes at a time when we’re still making discoveries from the abundant Kepler data and anticipating future missions like TESS (Transiting Exoplanet Survey Satellite), which will, unlike Kepler, home in on exoplanet possibilities around nearby stars, and the James Webb Space Telescope, which will measure the infrared spectrum of starlight passing through the atmospheres of transiting exoplanets. Both missions are to be launched within the next few years. The Wide-field Infrared Survey Telescope (WFIRST), scheduled for launch in about ten years, will offer wide-field imaging and spectroscopic surveys of the near infrared sky. NExSS exemplifies the multidisciplinary approach necessary to pull all this incoming information together.