It’s the twentieth anniversary of the discovery of 51 Pegasi b, a ‘hot Jupiter’ that was the first planet to be discovered around a normal star. I always have to throw in that ‘normal’ qualifier because it was in 1992 that Aleksander Wolszczan and Dale Frail announced their discovery of planets around the pulsar PSR 1257+12, the first extrasolar planets ever found, and an extraordinary discovery in themselves. Michel Mayor and Didier Queloz announced the 51 Pegasi b discovery in 1995, and it was quickly confirmed by Geoff Marcy and Paul Butler.

51 Pegasi b, some 50 light years from Earth in the constellation Pegasus, is the prototypical ‘hot Jupiter,’ a gas giant orbiting in tight proximity to its star. A new paper from Jorge Martins (Universidade do Porto, Portugal) and team announces another first for this world, the first detection of the spectrum of visible light reflected off an exoplanet. The detection was made by painstakingly removing the host star’s spectrum to reveal the spectrum of the (by comparison) extremely faint planet. 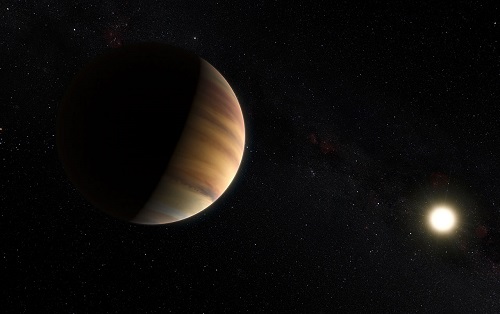 Image: This artist’s view shows the hot Jupiter exoplanet 51 Pegasi b, sometimes referred to as Bellerophon, which orbits a star about 50 light-years from Earth in the northern constellation of Pegasus (the Winged Horse). This was the first exoplanet around a normal star to be found in 1995. Twenty years later this object was also the first exoplanet to be be directly detected spectroscopically in visible light. Credit: ESO/M. Kornmesser/Nick Risinger (skysurvey.org).

This is intriguing work because until now we’ve been largely confined to studying exoplanet atmospheres through a method called transmission spectroscopy, which allows scientists to study starlight filtered through the atmosphere during a transit. Also in common use is occultation photometry and spectroscopy, which measures the depth of the secondary eclipse as the planet passes behind the star (again, we’re talking about a transiting planet). Occultation spectroscopy is particularly useful in gauging the heat signature of the exoplanet.

The method deployed by Martins and team uses what is known as the cross-correlation function to extract meaning from the combined spectra of star and planet. Correlation is a mathematical operation that uses two signals to produce a third signal — this third signal is the cross-correlation of the two inputs. Using their spectroscopic data, Martins and team could amplify the signal of the planet and then remove the stellar signal to reveal the planet’s spectrum. The paper describes the basic principle at work:

…the cross-correlation function (hereafter CCF) can be used to mathematically enhance the S/N [signal-to-noise ratio] of our observations to a level where the extremely low S/N planetary signal can be recovered. The CCF of a spectrum with a binary mask (Baranne et al. 1996) has been extensively tested in detecting exoplanets with the radial velocities method. Briefly, this technique corresponds to mapping the degree of similarity between the stellar spectrum and a binary mask (representing the stellar type), which increases the S/N of the data by a factor proportional to the square root of the number of spectral lines identified in the mask.

The work was performed using the European Southern Observatory 3.6 meter telescope in conjunction with the HARPS spectrograph at La Silla (Chile). The results reveal that 51 Pegasi b is about half as massive as Jupiter although somewhat larger than Jupiter in diameter, with an orbital inclination of about nine degrees to the direction of the Earth. That means that the planet’s orbit is close to edge-on as seen from Earth, although not close enough to allow a transit. Remember, 51 Pagasi b was a radial velocity discovery, and the method used by Martins and his colleagues is not dependent on transits, unlike transmission and occultation spectroscopy.

Exposed to the intense starlight of its host star in such a tight orbit, the planet is highly reflective. And the fact that these properties can be deduced from the spectroscopic technique he has developed is promising for the future, as Martins explains:

“This type of detection technique is of great scientific importance, as it allows us to measure the planet’s real mass and orbital inclination, which is essential to more fully understand the system. It also allows us to estimate the planet’s reflectivity, or albedo, which can be used to infer the composition of both the planet’s surface and atmosphere.”

Moreover, the fact that existing equipment could produce these results points to the potential of future instruments on larger telescopes, such as the Very Large Telescope and the planned European Extremely Large Telescope. The ESPRESSO spectrograph (Echelle SPectrograph for Rocky Exoplanet and Stable Spectroscopic Observations) will greatly exceed the HARPS instrument to produce radial velocity measurements that can reveal Earth-like planets. Now being manufactured, the goal for first light of ESPRESSO on the VLT is 2016. The paper notes what the combination of advanced instruments and this new spectroscopic method means:

The sheer increase in precision and collecting power will allow for the detection of reflected light from smaller planets, planets on orbits with longer periods, or an increase in detail for larger planets like 51 Peg b.

The paper is Martins et al., “Evidence for a spectroscopic direct detection of reflected light from 51 Peg b,”