Not long ago I looked at the future of the Voyager spacecraft and noted a possibility once suggested by Carl Sagan. Give the Voyagers one last ‘empty the tank’ burn and both could be put on a trajectory that would take them near, if not through, another star’s system (see Voyager to a Star). It would be little more than a symbolic act, for even with heroic measures to conserve power, neither Voyager will be able to communicate past the mid-2020s. With a little luck, perhaps 2030.

So we would be sending two spacecraft off to a star as a final act, turning them into markers, or monuments, that show humans are capable of producing something that will eventually reach (or come close to) another stellar system. Given their current trajectories, each Voyager passes interestingly close to another star in about 40,000 years, or roughly the amount of time since the extinction of homo neanderthalensis. The mere act of relating objects created by our species and launched in 1977 to time frames like this is itself an exercise in ‘deep time’ and the startling changes in perspective it forces.

Jim Bell, who as a young grad student worked on various aspects of the Voyager encounters, brought up Sagan’s interest in an end-of-mission course change in his new book The Interstellar Age (Dutton, 2015). If we were to do something like this, what do we know about its targets? Below is an image of the star AC +79 3888, also known as Gliese 445. It’s now 17.6 light years from the Sun, an M-class dwarf in the constellation Camelopardis. 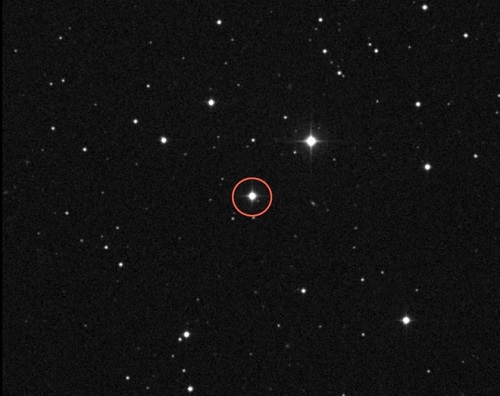 Image: Gliese 445, in an image taken by the Oschin Schmidt Telescope near San Diego, Calif., on April 22, 1998. Credit: California Institute of Technology/Palomar Observatory.

Assuming we leave the Voyagers alone, Voyager 1 will be closer to this star than to the Sun in the abovementioned 40,000 years. I often mention that if one of our Voyagers were pointed at Alpha Centauri, the journey would take roughly 75,000 years at 17.1 km/sec. But Gliese 445 is another kind of target. It’s moving in our direction at roughly 120 kilometers per second, so that at its closest approach it will be 3.485 light years out, closer than Proxima Centauri is today.

But even a trajectory-changing burn can apparently bring Voyager 1 no closer than about one light year of the star as it again moves away. Mark Biegert worked this distance out in Voyager 1 and Gliese 445, a post on his Math Encounters blog a couple of years ago, working with Voyager perfectly aimed at Gliese 445 — if anyone can tune up these numbers, I’d be interested in the results.

Voyager 2, meanwhile, should pass within 111,000 AU of HH Andromedae, otherwise known as Ross 248, in the same 40,000 years. Here again we’re dealing with an M-class dwarf with about twelve percent of the Sun’s mass and a mere 16 percent of its radius. Ross 248 is a flare star and thus far we’ve found no sign of planets around it, nor can we rule them out. The Hubble instrument was used to search for a stellar companion in the late 1990s, but none was found, and astrometric work at the Sproul Observatory found no trace of a brown dwarf companion.

Also moving in our direction, Ross 248 becomes the closest star to the Sun in the 40,000 year time frame considered here. Interestingly enough, Frederick West suggested in a 1985 paper that an unmanned craft moving at 25.4 km/sec, launched some time in the 21st Century, could reach this star by the time of its closest approach to the Solar System. West, then working as a translator of Russian scientific material at the Library of Congress, made the pitch at a session of the American Astronomical Society, envisioning a probe about the size of a large space station powered by an ion propulsion system and capable of data return after millennia. In what must go down in the annals of understatement, he told a Fredericksburg, VA newspaper that year that “We would have to build the interstellar probe exceedingly well.” Indeed.

Nudging Voyager trajectories to get them closer to these two stars — and I have no numbers on exactly how close we might come to Ross 248 in this scenario — is an opportunity we’ll have about a decade to consider as the spacecraft continue to lose effective power from their onboard plutonium. It’s the plutonium that generates electricity for the spacecraft’s computers and instruments, not to mention the critical heaters. The total power level at launch (470 watts) has now dwindled to 250 watts or so. We may get Voyager as far as 160 AU from the Sun before we lose communications. Suzy Dodd, now Project Manager for the Voyager Interstellar Mission, likes to think we could keep doing science until 2027, marking 50 years of Voyager operations.

What happens if we choose to leave the Voyager trajectories alone? Without needed power, they will fall silent but keep traveling. It will take less than 300,000 years for Voyager 2 to pass within 270,000 AU (the distance now separating us from Alpha Centauri) of Sirius, at which point it will be half as far from Sirius as we are now. In his book, Jim Bell imagines the hot blue star looming four times brighter in the sky than it does from Earth. Neither Voyager has galactic escape velocity, so 250 million year orbits around the Milky Way’s center are in store after this. It’s a prospect that evokes Bell’s deepest poetic instincts, and he does them justice:

…Voyager 1 will continue to slowly travel northward and Voyager 2 southward, relative to the sun and the surrounding stars. Over time— enormous spans of time, as the gravity of passing stars and interacting galaxies jostles them as well as the stars in our galaxy— I imagine that the Voyagers will slowly rise out of the plane of our Milky Way, rising, rising, ever higher above the surrounding disk of stars and gas and dust, as they once rose above the plane of their home solar system. If our far-distant descendants remember them, then our patience, perseverance, and persistence could be rewarded with perspective when our species— whatever it has become— does, ultimately, follow after them. The Voyagers will be long dormant when we catch them, but they will once again make our spirits soar as we gaze upon these most ancient of human artifacts, and then turn around and look back. I have no idea if they’ll still call it a selfie then, but regardless of what it’s called, the view of our home galaxy, from the outside, will be glorious to behold.