A New Look Inside Enceladus

We can hope that plumes like those found emanating from the south pole of Enceladus happen on other icy worlds. There have been hints of plumes at Europa but they’ve proven elusive to pin down. However, we’re learning a great deal about the water inside Enceladus through Cassini flybys, using models based on mass spectrometry data the spacecraft has gained from the ice grains and gases in the moon’s plumes. A similar approach on other icy moons, if possible, could save us from having to drill through kilometers of ice.

What Christopher Glein (Carnegie Institution for Science) and team have done is to construct a chemical model that uses the Cassini observational data to determine the pH of the Enceladan ocean. It’s an important reading because pH tells us how acidic the water is, which gives us a look into the geochemical processes occurring inside the moon. What the new work shows is that the plume is salty, with an alkaline pH of about 11 or 12. This Carnegie Institution news release likens the pH to glass-cleaning ammonia solutions, with the same sodium chloride as Earth’s oceans.

We also find a substantial amount of sodium carbonate, which makes the Enceladus ocean similar to ‘soda lakes’ found in places like Mono Lake in California and Lake Magadi in Kenya. The paper on this work suggests that the high pH comes from serpentinization, by which rocks low in silica and high in magnesium and iron rise into the ocean floor from the upper mantle and chemically interact with surrounding water molecules. These ‘ultrabasic’ rocks are converted into new minerals — one of these is the mineral serpentine — and the water becomes alkaline.

This would be a significant finding because we’re looking for the energies needed to support life inside icy worlds like these, and serpentinization can produce molecular hydrogen (H2) to fit the bill. Says Glein:

“…molecular hydrogen can both drive the formation of organic compounds like amino acids that may lead to the origin of life, and serve as food for microbial life such as methane-producing organisms. As such, serpentinization provides a link between geological processes and biological processes. The discovery of serpentinization makes Enceladus an even more promising candidate for a separate genesis of life.” 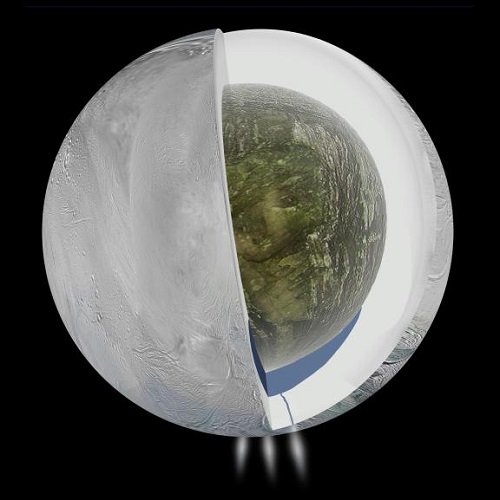 Image: A diagram illustrating the possible interior of Saturn’s moon Enceladus, including the ocean and plumes in the south polar region, based on Cassini spacecraft observations, Credit: NASA/JPL-Caltech.

A separate genesis would not necessarily imply a continuation of life on the moon today, a point the paper is careful to make:

Aside from the origin of life, the biggest unknown that would be critical to life on Enceladus is the availability of H2. Are there “fresh” anhydrous rocks deep in Enceladus’ core, allowing H2 to be produced today (Brockwell et al., 2014); or has the ocean core system reached a state of complete chemical equilibrium…? If the latter, it is possible that life existed but died out because they ran out of food. This is an important issue to consider as we move forward in assessing the habitability of Enceladus.

The convenience of internal materials being pushed into space is hard to over-state, as it gives us the raw material for finding evidence of life through molecular analysis, and we can’t rule out the faint but real possibility of someday acquiring frozen organisms with future plume flybys.

Meanwhile, we learn more about those jets of material erupting from inside the Saturnian moon through a NASA study led by Joseph Spitale (Planetary Science Institute). The work, published in Nature, argues that rather than being discrete jets, the phenomena are ‘curtain eruptions’ that extend along the length of the prominent surface fractures on Enceladus.

Rather than intermittent geysers, we get, at least primarily, diffuse sprays whose ‘folds’ appear as separate streams with heightened brightness. “The viewing direction plays an important role in where the phantom jets appear,” Spitale said. “If you rotate your perspective around Enceladus’ south pole, such jets would seem to appear and disappear.” What we see as jets, then, would be an optical illusion, but the phenomenon of expelled materials fortunately persists.